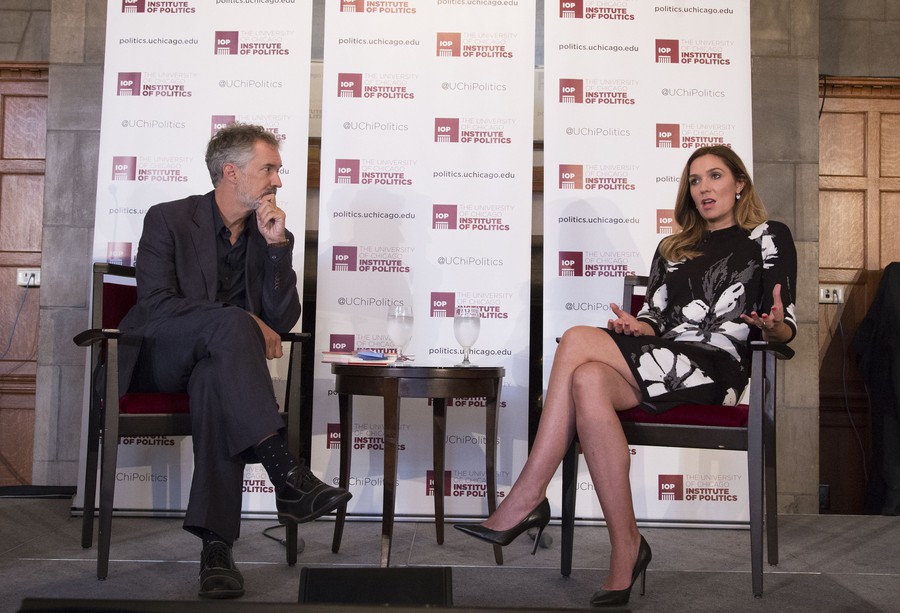 Amanda Carpenter, a former senior staffer in Ted Cruz’s (R-TX) 2016 presidential campaign, sat down with University of Chicago political science professor Eric Oliver in front of a packed room to talk about her recently published book, Gaslighting America: Why We Love It When Trump Lies to Us.

Oliver prefaced the conversation by asking Carpenter what drove her to write about the Trump presidency. “Having a front seat in the 2016 election, watching my party succumb to the trance and power of Donald Trump,” Carpenter answered.

This process is what Carpenter deems as gaslighting. She defined it as either fighting a figure of authority’s powerful influence until forced into hysteria, or succumbing to that influence.

Carpenter’s book keyed in on five steps that Trump used in order to simultaneously promote conspiracy and come out the hero. These steps include finding a conspiracy, advancing yet denying responsibility for that conspiracy, creating suspense, starting fights, and  resolving the conspiracy while “claiming victory” by taking responsibility for that resolution. Amanda firmly believes that the efficacy of these tactics are what lead people to propagate the conspiracies and gaslight the public.

“You get bullied into questioning your sanity,” Carpenter said.

Despite the general agreement among the audience on Carpenter’s opinion on gaslighting tactics, the conversation was not without discourse, as Oliver was quick to move from the general gist of the book to key details that he felt needed addressing.

Picking out certain sensational passages from the book and Carpenter’s writings highlighting the role of former Secretary of State Hillary Clinton in the 2012 Benghazi attack, Oliver questioned how Carpenter’s own “provocative rhetoric” differed from her accusations directed at Trump.

Carpenter denied the comparison, instead seeing her work as reporting the existence of such conspiracies and their effect rather than propagating them. “You can’t ignore and pretend this stuff doesn’t happen,” Carpenter responded. “I am here to tell you, this stuff works.”

The latter half of the event was reserved for audience questions. One recurring question throughout the evening was how to combat the hyperpolarization caused by gaslighting.

“People do not want to be told that they are wrong,” Carpenter said at the end of the event. “If someone were sent a fact-check, they would read the headline and delete it. The only way we can come together as a country is to find a set of shared values and work towards those values. Sending someone a fact-check about Trump’s tax returns? Not doing much.”