What We Cannot Forget

The Tree of Life shooting may have been astonishing, but anti-semitism is nothing new. 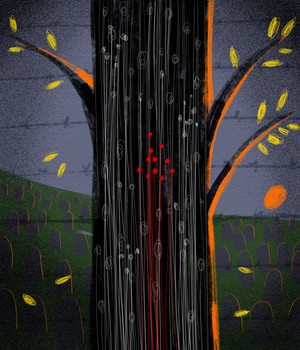 The gunshots are still ringing in our ears. The tears are still wetting our eyes. The pain is still fresh in our hearts. As the terrorist attacks on the Tree of Life synagogue in Pittsburgh shock and horrify the world, people are still trying to come to terms with this heinous act. Sitting in Baker two days after the shooting, I overheard a few students discussing the event. I was passively listening, but was struck when I heard one student ask, “Who knew anti-Semitism was such a big deal?”

There were general nods and mumblings of agreement as the conversation turned and the question floated away into oblivion. I should’ve said something, but in that moment, with a lack of fully formed thoughts, I let it go.

As lead pierced the pages of the Torah and the bodies of those who loved its teachings, we were distressed, but not astonished. We knew. We knew this hate existed in Nazi Germany, and we know that this same hate is still a cancer in contemporary society.

In Jewish culture, the Holocaust is omnipresent. Six million people were slaughtered because of their heritage—our heritage. In present-day America, the Holocaust may seem otherworldly, from a time past. Not only did it happen across an ocean, but the pictures of the concentration camps are in black and white. But as a Jew, it is all too real. There are still empty spots at our dinner tables. There are still branches of our family trees that will never flower. There are still those among us who were victims of these atrocities. As a Jew, this hatred is not merely a terrifying history, but an unfortunate reality. From the Spanish Inquisition, to pogroms in Europe, to the ethnic cleansing of Jews in the Middle East, to the Holocaust, to neo-Nazism, anti-Semitism has persisted. Even on our campus, posters bearing the mark of neo-Nazi groups have attacked and belittled Jews and other minorities. Even as Jews build and integrate themselves into American society, the ground on which we build is shaky.

Jews are not disproportionately economically disadvantaged in America, and with fair skin we can “blend in” to the majority, while other minorities cannot. Anti-Semitism, however, does still exist and this should be widely recognized. Due to a seeming lack of oppression, it can be easy to forget the hatred for Jews that is embedded in our culture. Especially due to its relative dormancy in recent years, the harassment of Jewish students and graffitied swastikas can seem like isolated incidents, rather than the symptoms of a pervasive virus still infecting our society.

Andrew Schildcrout is a first-year in the College.