McCarthy Needs No Forgiveness for "Can You Ever Forgive Me?" 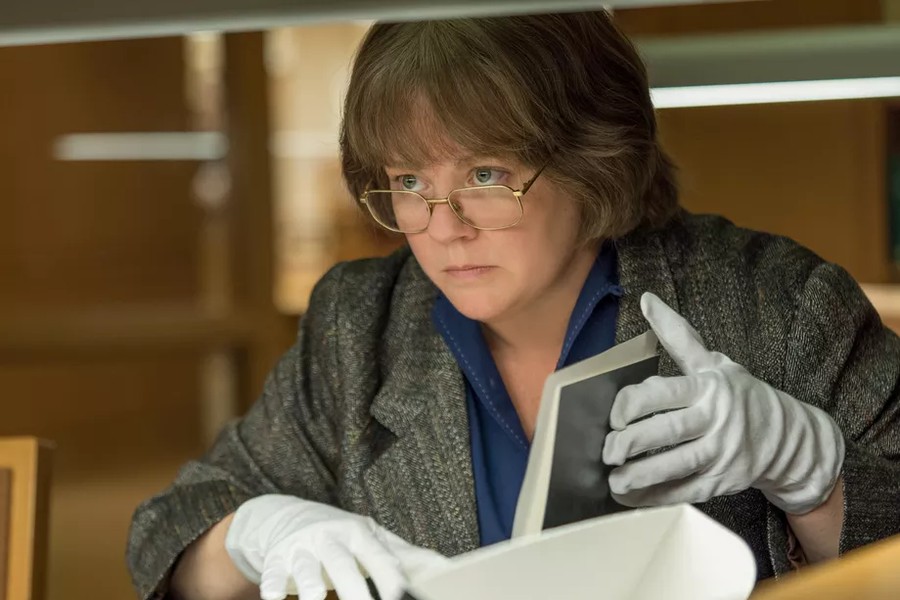 Melissa McCarthy plays a lovable schemer in "Can You Ever Forgive Me?"

In Marielle Heller’s superb Can You Ever Forgive Me?, celebrity biographer-turned-forger Lee Israel quips, “I don’t think I’d find myself very interesting.” I think audience members will disagree.

When we meet Lee (Melissa McCarthy), life isn’t doing her any favors. She’s just been fired from the latest in a series of clerical jobs. Her work, which once included chronicling the life of Katharine Hepburn, has completely dried up. Her literary agent won’t return her calls. And, most upsettingly, her cat is sick.

But it’s not as if Lee, with her prickly demeanor and general unpleasantness, evokes much sympathy. She insults her peers, coworkers, and nearly everyone she meets. She drinks far too much and attends a literary party only to steal a stranger’s coat, toilet paper rolls, and shrimp canapés. Lee refuses to succumb to the New York publishing game, unwilling to engage in niceties or schmooze her way to prominence. It’s at this nadir that Lee stumbles into a welcome surprise at the local public library, inspiring her second career: forging letters from long-dead literary greats. It’s a conceit so strange that it must be true—and it is. Based on the real-life Lee Israel’s memoir of the same name, the film tracks Lee’s crime spree through the bizarre world of secondhand bookstores, antique fairs, and rare-print dealers.

McCarthy discards her usually affable charm to embody the disagreeable Lee and demonstrates an unexpected range and nuance. Lee may be one of the most likeable alcoholic cynics to ever grace the big screen, and it’s due to McCarthy’s performance. She embraces Lee’s dowdiness, rudeness, and anger without sacrificing her dignity or humanity. Lee is a fully realized woman—one defined by her brusque disillusionment but grounded by her desperate hope that everything will get better.

For as much as McCarthy shines, she finds a more-than-capable counterpart in Richard Grant’s Jack Hock. After meeting in a bar, Jack and Lee embark on an unlikely friendship and, eventually, criminal partnership. In many ways, Jack is the opposite of Lee; handsome and personable, he glides through life on his natural charisma. Both of the degenerates are perfect complements to each other. McCarthy and Grant exhibit an immediate and obvious chemistry, and the script provides them plenty of opportunities to showcase it. The actors seem equally at ease trading barbs in a crowded bar as they do arguing in the quiet of a bathroom. Founded on caustic wit and shared desperation, we witness a believable and intimate relationship.

In performances certain to generate awards season buzz, McCarthy and Grant expertly portray the duplicity of their public callousness and their private vulnerabilities. That is their crowning achievement: McCarthy and Grant allow the audience to see what the rest of Lee and Jack’s world cannot. The audience can’t help but root for these wonderfully flawed characters along the way.

As much as the film is a platonic love story between Lee and Jack, it is also an ode to a bygone era: New York City in the 1990s. The talented Heller guides us through a world that is fully realized, yet never romanticized. From the squalor of Lee’s apartment to the dusty familiarity of the local bars, Heller adheres to her distinct sense of time and place with remarkable clarity. Underscored with modest jazz, the autumnal city is at once dreary and vividly alive.

Where the plot may wear thin or predictable, the audience is drawn back in with the help of a strong supporting cast of players. Jane Curtin provides refreshing bluntness and comedic prowess in her role as Lee’s agent. Stephen Spinella’s rare-prints dealer captures the eccentricities of the niche literary community in which the film resides. Dolly Wells is a delightful bookstore owner and potential love interest for Lee, serving as a de facto narrative compass. Heller offers deft and subtle direction that allows for the actors to breathe, and the script provides just enough structure to compel the film forward during its narrative lulls.

Heller executes her singular vision with precision, retaining the quirks and fundamental humanity of both people and setting. Nobody will find the flashy technical magnificence of First Man or whiplash-inducing emotional rollercoaster of A Star Is Born in this movie. And that’s not what Heller wanted in crafting the textured backdrop on which McCarthy and Grant thrive.

Can You Ever Forgive Me? manages to be a lot of things at once—a low-stakes crime drama, a darkly humorous dramedy, a nostalgic period piece, a dramatic triumph for McCarthy—but most of all, it is a gratifying and thorough depiction of the misfits that often go overlooked.