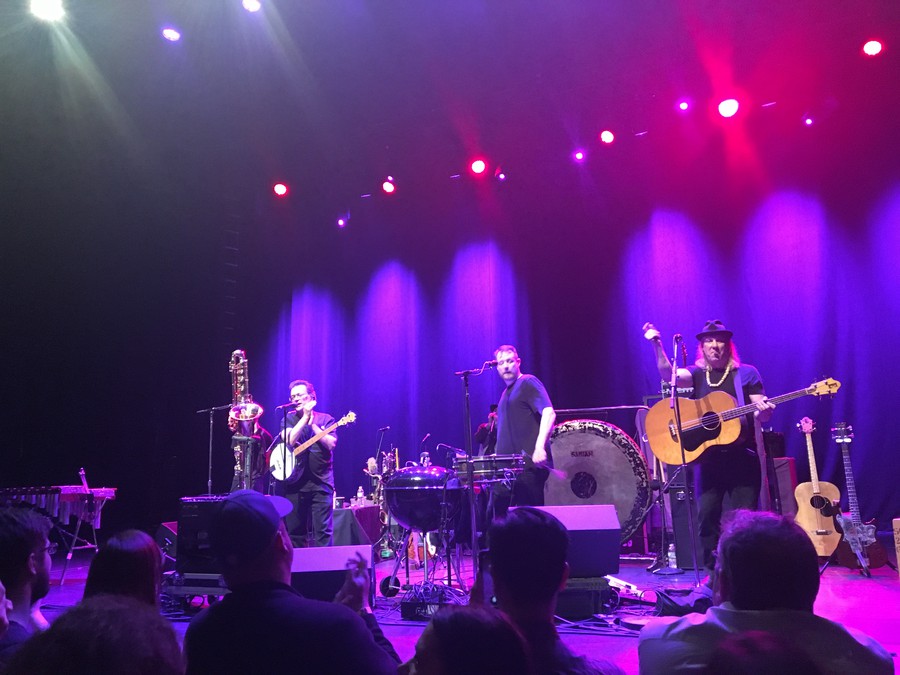 I was standing alone in the cold and rain, waiting for a bus that should have been there 20 minutes before. This felt strangely appropriate as I was headed to the Vic to see Violent Femmes’s sold-out show and one of the band’s earliest songs is called “Waiting for the Bus.”

A lot of people know Violent Femmes for the song “Blister in the Sun.” What a lot of people don’t realize is that Violent Femmes is one of the best, and weirdest, bands out there. It is an acoustic improv-heavy proto-punk band with a drummer who stands when he plays, an acoustic bassist who shreds through ridiculous, balls-out solos in almost every song, a singer whose wimpy vocals sound angry about being wimpy, and occasionally a horn section that plays avant-garde noise-jazz. None of this should work, but somehow, it all comes together. The band is credited with founding the genre of folk-punk, but it doesn’t make much sense to put Violent Femmes in a genre, because there are no other bands that sound remotely like it. Above all, what sets Violent Femmes apart is the band’s songwriting, which packages the thoughts of a horny, anxious 17-year-old misanthrope into tight, fun, timeless, bizarrely catchy songs.

Before the band even came on, there were a half-dozen brass instruments strewn about on stage, including a saxophone that looked about 8 feet tall. There was a gong, a xylophone, a cajon, and a barbecue—yes, there was an actual grill onstage that appeared to be part of the drum kit.

They began wordlessly with their brooding, ominous “Confessions.” As the song built up to its unsettling climax, more and more people walked onstage, picked up brass instruments, and joined in, creating a startling, free-form cacophony that elevated the song from the recorded version into something larger and more daunting. It felt like Violent Femmes just asked some of their roadies and friends to pick up random instruments and make noise. Caroline Smith, the reserved folk artist who had played acoustic guitar before the concert, was now blowing into a trumpet, red-faced, her fingers moving wildly. And, at one point, bassist Brian Ritchie traded his bass for a conch shell.

The Femmes jumped seamlessly back and forth across their discography throughout the set; songs from their newest releases held up to the standard set by their now 35-year-old cult-classic debut album. Playing a brand-new song, “I’m Not Gonna Cry for You,” they proved they have not lost their touch for gleeful irreverence.

The band’s versatility was astonishing: They flew into jazz-punk freakouts in the middle of acoustic pop songs, they faded out live on “Please Do Not Go,” playing and singing quieter and quieter until becoming inaudible, they veered into psychedelia as Ritchie co-opted an effects pedal on his bass to make creepy, ethereal sound effects rather than play notes during their spacey, abstracted performance of “Color Me Once.” Ritchie recreated the ripping xylophone solo of “Gone Daddy Gone” note for note, but every other solo was altered, expanded, and brought into new territories.

The most engaging thing about seeing Violent Femmes live is that the band is still willing to take risks. They do not use setlists, opting instead to play whatever feels right in the moment, even taking requests from the audience. They seem to feed off of their own unpredictability. They are a bona fide punk band, but they play enough extended improvisational interludes to veer into jam band territory. However, rather than adopt the laid-back attitude of jam bands, they manage to maintain the urgency and abandon of punk. The thrill of watching them is that they feel as though they might fall apart at any second, but never do.

Violent Femmes does not smooth down its edges, but rather sharpens and emphasizes them. It is a band that sounds—and looks—kind of ugly, and asks you, “so what?” One of the most immediately appealing things about Violent Femmes is the way its simultaneously stripped-down and in-your-face nature stands in bold contrast to most other musical groups. The band’s very existence is a challenge to norms. Sometimes, though, it is hard to understand what the band members are doing. During the set they inexplicably juxtaposed blistering anthems of teen angst with seemingly non-ironic gospel songs and a children’s polka song about an adventurer named Pongo. For the most part, though, I was right there with them as they blasted through their catalogue of deceptively simple and demented-yet-sing-songy music, and they looked to be having as good of a time as the audience was.

Having not expected to go to this show, and having not listened to them in a while, I quickly remembered everything about them that had originally blown me away: their brash and unique musicality, their organized chaos, their songs that chug along like a choo-choo train on a drug binge. However, what mostly gets to me is their sheer relatability. This is something that is beautifully articulated in their encore-opening fan-favorite “American Music”: “I like American music / It reminds me of me.”