The Woman Who Could’ve Fallen a Little Better: "Doctor Who" Midseason Review 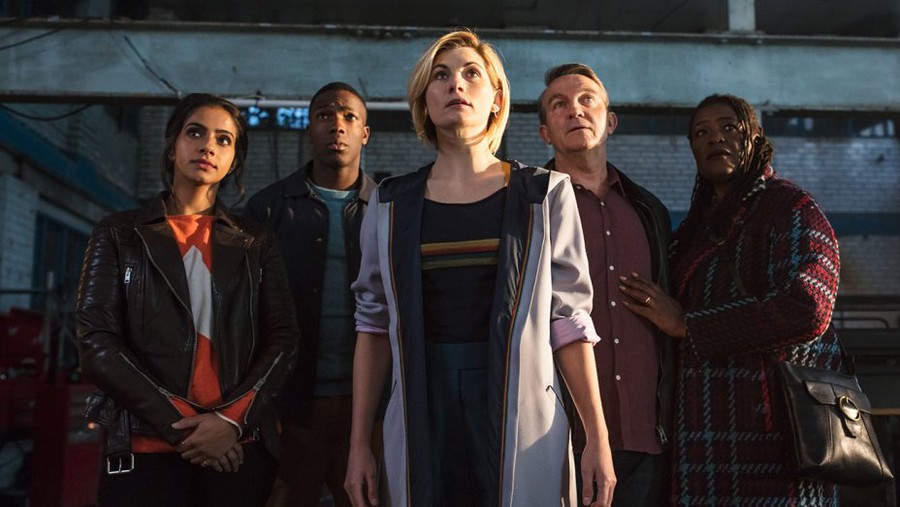 When the 11th season of Doctor Who was announced, nobody knew what to expect. Not only was there a change in showrunner from Steven Moffat to Chris Chibnall, but the Doctor is now a woman and has three companions instead of two. While perhaps seemingly arbitrary to an outsider, these modifications are radical to any experienced Whovian. Not once has a New Who (from the revival on) writer challenged so many basic premises of the show, which was revived in 2005. The last “radical” change to the show was probably the 2010 casting of Matt Smith, whose relatively young age was considered controversial. One doesn’t need to delve deep into Reddit and YouTube to see what those critics think of Jodie Whittaker today.

Despite mass uncertainty in his direction for the show, Chibnall has proven himself to be a competent showrunner. The first five episodes of the new season, despite having their imperfections, were impressive. “The Woman Who Fell to Earth” and “Rosa” stood out among the rest. The first episode effectively introduced the new Doctor’s quirky personality traits and the origins of the three companions-to-be. Emotionally driven and impeccably paced, the opener offered a glimpse of Chibnall’s vision, especially what he intends to preserve from Russell Davies’s and Moffat’s legacies: the companions come from very ordinary working-class backgrounds, and the Doctor still has absolutely no control over the TARDIS. A violent monster is defeated by cleverness and wits alone. “Rosa” proved further to be a statement of consistency. Perhaps the best episode of the season yet, it followed the model of some of the most successful Doctor Who episodes in which an important historical figure is featured. In fact, the episode was reminiscent of Richard Curtis’s 2010 “Vincent and the Doctor,” one of the most emotionally charged and critically acclaimed episodes in New Who.

Chibnall’s development of the three companions was surprisingly well done. The personalities and motivations behind Graham, Ryan, and Yasmin (portrayed by Bradley Walsh, Tosin Cole, and Mandip Gill, respectively) were revealed starting in the first episode. While we still don’t have a very thorough understanding of their backgrounds (especially Yasmin’s), their interactions with each other and the Doctor have set them up to be as unique as any other companions in New Who. While the characters were obviously greatly affected by the Doctor’s presence in their lives, we have yet to see how Chibnall will work them into the Doctor’s existence as other showrunners have. Moffat’s writing often introduced a companion’s significance to the Doctor in the character’s first episode. For instance, Amy Pond’s crack in the wall—which summoned the Doctor in the fifth season—is the beginning of a massive plot arc that lasted two entire seasons, and River Song’s first episode initiated a subplot that began with David Tennant’s Doctor and ended last Christmas, with Peter Capaldi’s. In this sense, Chibnall channels a more traditional Davies approach. Like Rose and Donna, the current season’s companions are just normal British blokes, minding their own business until something extraterrestrial happens and the Doctor has to come and save them. Now it waits to be seen if Chibnall can pull off something as powerful as the storylines of these two companions.

Jodie Whittaker is especially outstanding, creating a unique and compelling reinterpretation of the Doctor despite the conservative backlash against her casting. Her bubbly and quirky personality mirrors that of Matt Smith, in a more optimistic way—a welcome contrast with the darker themes of Peter Capaldi’s take. Unlike Smith, however, Whittaker hasn’t been given the best lines. Dialogue, especially when written for the Doctor, is the primary element that falls flat for this season. Whittaker shows a lot of potential for powerful delivery and monologues, but so far has only been treated to awkwardly phrased interactions in even more awkward situations. The companions don’t fare much better; the timing of their interactions often seems out of place and the content of their conversations sometimes sounds cringingly forced. Many guest actors’ characters are even worse, especially Chris North, who plays American businessman-politician Jack Robertson in “Arachnids in the U.K.” The characterization was so unnatural and shallow; his entire purpose in the episode was to be a walking meme-able embodiment of American politics. Admittedly, the satirical humor wasn’t bad; it just shouldn’t have been the focus of the episode.

In general, the season still hasn’t taken a clear direction towards good or bad. But considering the revolutionary changes Chibnall has implemented, he’s doing pretty well in keeping the same essence of Doctor Who that kept the show popular enough to be the longest-running science-fiction TV series in the world. At the end, Chibnall proves to us that perhaps concepts like the Doctor’s gender and number of companions, despite having remained unchanged for decades, really are arbitrary details, and that it’s the inspiration and emotion that comes with the Doctor’s stories that are the most important.