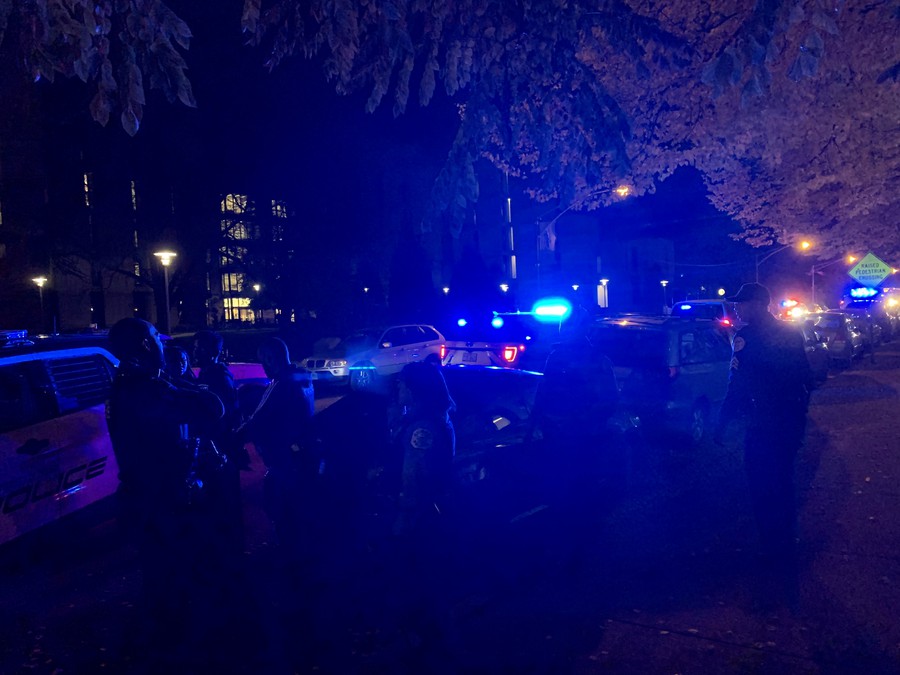 A young man was arrested in front of the Regenstein Library at around 10:45 p.m. Police on scene said that he was chased on foot and suspected of committing a robbery. It is unclear if he was linked to the battery of a student nearby.

Teen Halloween began in 2016, behind the support of local volunteers and youth mentorship groups, with the intention of providing Chicago adolescents with an avenue to celebrate while staying out of harm’s way. This year, the large-venue Halloween party was held at The Promontory, hosting roughly 400 teens in a 500-person capacity space.

In recent years, Halloween in Hyde Park has become associated with social media–organized gatherings of youth engaging in belligerent behavior and vandalism. This has led residents to question whether Teen Halloween actually serves its intended purpose or instead creates an environment that invites misbehavior by allowing large, energetic crowds to gather.

“I think Hyde Park needs to decide—are we going to allow kids to come here and engage in misconduct?” one attendee asked.

Other speakers were dissatisfied with both Chicago Police (CPD) and University of Chicago Police (UCPD)’s performance on Halloween night. “I questioned the conduct of some of the UCPD that night when they were on their own,” one speaker said.

Hyde Park resident Lissa Romell, who saw her son’s car vandalized by the passing crowd, suggested that the police strategy of following the crowd of teenagers on bikes to shepherd them along may have contributed to the chaos. “There were a lot of kids that were being swept along,” she said. “We were at a loss.”

Captain Arthur Gillespie of the UCPD responded that the department will address any activities by officers that went against procedure and mentioned that “there will be a reassessment of the plan” for Halloween nights going forward.

Two eyewitnesses, Bennie Currie and Lauren Reeves, suggested that certain security measures taken to protect local homes and businesses may have jeopardized the safety of both the teens at the party and local residents. Cordoning off streets, for example, caused a bottleneck for people leaving the event and made it difficult for some to find transportation.

“They weren’t able to get home because there weren’t buses coming,” said Reeves. She added that the issue extended beyond public transportation, as the impromptu street closures made it difficult for the teens to hail Ubers.

For the most part, though, speakers supported Teen Halloween as an outlet for safe, healthy fun. “What I saw at Promontory was absolute, pure joy,” said Brian McCoy, one of the organizers of the event.

Ebony Lucas, a member of the party’s planning committee, said that the event has always been intended to “engage teens in a positive way,” adding, “We have groups that believe in what we’re doing.”

“There’s not a whole lot going on outside of school,” Caleb Wilkerson, a student at Kenwood Academy, said. “When people want to do stuff outside of school, that’s when you get to having problems, because they don’t really know what to do.”

Wilkerson, who helped plan Teen Halloween, discussed the need for dialogue between teens and adult leaders. “It just really needs to be a lot more of teens working with the adults in the neighborhood,” said Wilkerson. “When we get the teens to be involved in their community, that’s when good things happen.”

Others discussed one-on-one communication as a way to directly address concerns with teens inclined towards criminal behavior. Enoch Muhammad, co-founder of Hip-Hop DetoxX, a youth mentorship group, said, “To communicate—that’s to get information. So, between now and next year, we can work together so we don’t have these kinds of problems.”

For Muhammad, direct communication may have already thwarted a potential incident. Lucas said that last Friday she discovered that some teens were planning another “purge” that night. She was able to reach out to Muhammad and Hip-Hop DetoxX, who in turn got in contact with the individuals in question and helped dissipate a gathering crowd.

“That intervention, we believe, stopped what could’ve been something that was another incident on Friday,” said Lucas. “It let us know again how important those community partnerships are.”

The meeting concluded with remarks from Alderman Sophia King of the Fourth Ward.

“I think this has been a good event. There was lots of planning and anticipation,” said King. “Collaboration is what we have to have going forward.”

The article originally stated that the meeting took place on Thursday. It has been updated to reflect the correct date.