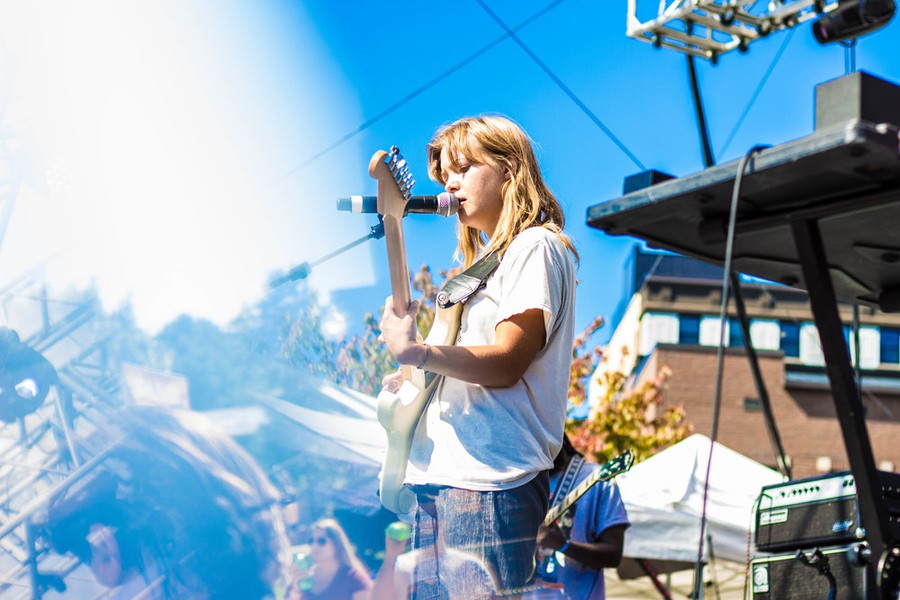 Jess Price, the frontwoman of Campdogzz

I spoke on the phone with Jess Price, the frontwoman and songwriter of Chicago band Campdogzz, for a Q&A in advance of them opening for Cursive at Thalia Hall on Thursday, November 15. The band, whose recent sophomore album In Rounds was released with label 15 Passenger, has had well over a million streams on Spotify, and a song featured prominently in the Netflix show Easy.

Chicago Maroon: What is it like opening for [Nebraska Indie-rock legends] Cursive? Do you feel like Cursive fans have embraced you?

Jess Price: I think so. It seems that most of their fans are pretty open-minded…. I think everyone’s been pretty receptive.

CM: Do any shows stand out so far? You played Irving Plaza in New York the other night; was that a special moment or was it just another show on the tour?

JP: It definitely was special. I mean, each night has been special on the tour for different reasons, whether it’s a larger venue or a smaller club—each one has been great. I can’t even pick one thing out to complain about.

CM: Your band started off as this core duo of you and Mike [Russell]. Does it still feel like it’s the two of you accompanied by touring musicians, or do you feel like more of a solidified five-piece band now?

JP: Definitely the latter. That’s what we were trying to work towards over the course of recording this record and touring on it, and I feel that we really locked in together. It’s nice to have that solidified, too. I think it was easier initially to start off with the two of us to get everything rolling…. It takes time. But yeah, now it’s starting feel a lot more collaborative.

CM: Is there a story behind your band name?

JP: There probably is. Mikey would be the one to ask about it. He threw it out there and we just liked the way it sounded and, um, it stuck. I wish there was more to it than that.  It kind of encapsulated how we felt, like rough people maybe. We thought the z’s were funny.

CM: You are the first and only band that Cursive has signed to their label [15 Passenger]. How did that happen?

JP: [Cursive frontman] Tim [Kasher] e-mailed me about a year and a half ago. He just wanted to let us know that he appreciated the first record a lot and was starting this label, and we just started communicating that way. And then his team went on a Tim Kasher tour with another band, the Kasher band, and took us out with them, so we got to know them quite a bit better that way. And we were about to put this record out, or we were looking for a way to do that or get some help with it, and, just, they were the perfect fit. We have a lot of respect for them as people and as a band. The things that are important to them aligned with what’s important to us, and it really felt good and right. It unfolded pretty naturally—I think he found us through some mutual friends. I know he lived in Chicago for a while. So yeah, it just happened.

CM: What kind of relationship do you guys have with the members of Cursive? Is it more a friendship or mentorship?

JP: A little bit of everything. They definitely have just the business side of it, which sometimes you have to separate a little bit from the friend side of it. But also, I feel very comfortable with them and it’s a very natural relationship, so it’s easy. They’re very easy to talk to and have that friendship, but also that working relationship too. But you know, they tour and they’re still very much a working band, so it’s pretty easy for them to relate to us.

CM: When you’re writing lyrics, do you see it more as personal and confessional, or do you think of it more as painting a picture or creating a narrative?

JP: I’m not sure how to answer that. I think usually the melodic things will come first, and the lyrics kind of get chiseled in later. But I think the overall sound informs the lyrics a lot, just like even phonetically—how the syllable sounds. Sometimes it’s total mumbo jumbo and then I’ll, you know…it’s very situational, even during the course of writing a song, the meaning will change for me, so it’s hard to pinpoint.

CM: Can you tell me about your songwriting process at all? Do you have a particular method?

JP: Not really, just having alone time. Sometimes, and I’m sure Mikey’s probably similar in this way, and maybe a lot of people, but you’ll have an idea in the van or something and try to sneak away and get a little sound bite to recall later. But more often than not, the things that come easiest are just being alone and giving yourself that time to not have any distraction and just have your tools around you and see what comes of it.

CM: Do you always go off alone to write something and then bring it to the band for them to add to it?

JP: Generally, at least in the past. I’ll just demo stuff at home usually, not with any major intentions, just to see what comes, and then take the ones that I think I feel most confident about and show them to the band, and then it will loosely get an idea of it. They don’t really like to drill it into the ground too much because then when we get in the studio there’s room to let things happen in that spontaneous, like, visceral way. But I don’t know, I think as we move forward and look at new songs, the structure might change a little bit. But that’s just the way that it seems to happen naturally, so far.

CM: I really particularly like the song “Souvenir” (on the new 2018 Campdogzz album, In Rounds).  Could you just tell me a little bit about what inspired that song, or where you were at when you wrote it, or what it means to you?

JP: A good truck of those songs on In Rounds were all written—or at least finished being written—in the Southwest of the U.S. when we were traveling for a few months out there. So that’s kind of a rare time where I wasn’t in the comfort of my home. That was a new experience, trying to write away from home. I think the simplest idea behind it is just moving from one thing to the next, figuratively and physically. That feeling was pretty thick throughout the whole album, I think.

CM: Yeah, you always seem to be writing about leaving, or driving, or being somewhere that distinctly isn’t home. There’s something nomadic, something wayward about almost every single one of your songs on the new album. Do you see yourself as a nomadic person? Was that just for this album that you happened to write it on the road, or do you just feel more comfortable writing from that perspective?

JP: At the time I did because it was just really relevant to that time frame. We were traveling a lot. I feel far more comfortable at home these days, but I think it’s a moment in time. It speaks to that moment, you know. Everything changes.

JP: I think we’re a part of Chicago in that we’re Midwestern people. It’s just such a unique city. It’s the reason I came there, you know. There’s a really rich history, but you also have just the camaraderie…. It’s a really tight-knit community, so even if we’re not plugged into one particular scene, I just think living in Chicago is its own scene: You’re there, you’re making it through the winter together. The Midwest, in general, is kind of where we feel most plugged in. But we love touring too, getting to know other parts of the states, but yeah. It’s a good home base.

CM: Your band is indie, it’s Americana, it’s grungy, it’s folksy. What would you say your genre is?

JP: It’s always easier for me to just name influences. We started the band as kind of a tribute to Jason Molina after he passed away [in 2013], and I am hugely influenced by [his album] Songs: Ohia. So, I think that’s a pretty big one for us. I grew up listening to Cat Power, Built to Spill, Duster. We all have a pretty large span of influences that keeps growing, so we pool from a lot of places unconsciously.

CM: Your press release describes your vocals as snarling. Do you agree with that? Do you feel like a snarler?

JP: [laughing] Probably. I guess so. I’ve probably snarled at a few people.

CM: You originally moved to Chicago to be a filmmaker. How did it feel to direct your own music video (for the new Campdogzz single “Run Wild”)?

JP: Great. I’ve been doing that for a while, it wasn’t the first time. Pretty much all of our videos have been put together by me. Except for, more recently, Tim directed one. Yeah, it felt great, I love making videos. That’s how I know a couple of my bandmates. I’m still really active in that and always will be. I work best with other musicians. Maybe not best, but the majority of the videos I’ve made have been music videos or documentaries, so it feels really good. I would like to collaborate with some other people maybe more on our stuff, just to take myself out of it a little bit, but it’s hard not to want to work on it.

CM: Right now you’re touring on your second album you just put out in August, but you self-released your first album in 2015. Since then, you have an enormous amount of success for a band with a self-released Bandcamp album. Are you shocked at all or does it just feel like a normal trajectory?

JP: I mean, it’s crazy, I think, absolutely nuts. In this time in music, it’s really hard. There are a lot of really great bands that have been doing it a while and…we were lucky that at the…beginning we just had so many great friends—people sharing stuff with other people who can help. We all just need to do that with each other more, because it does go a long way just to help people out when you can.

CM: What is your favorite place to eat in Chicago?