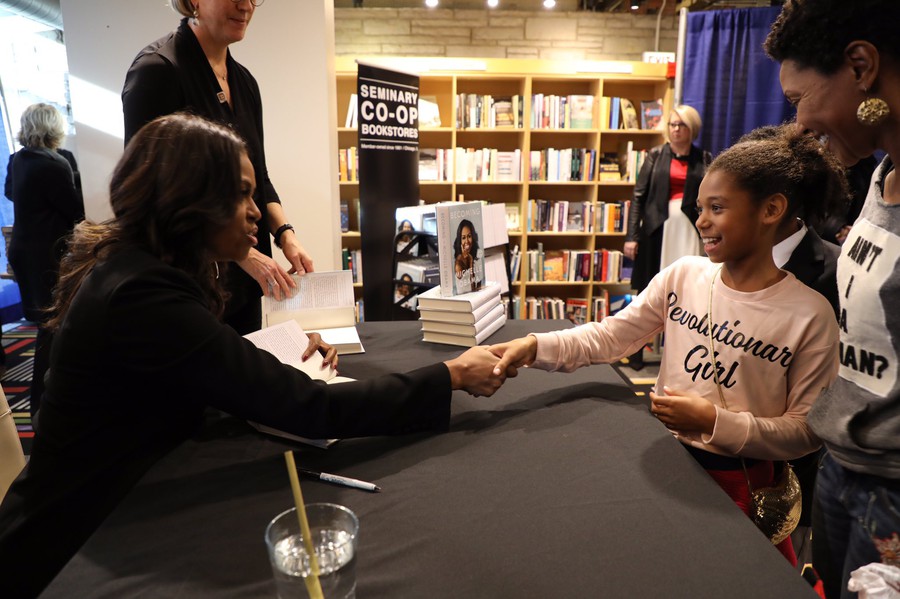 Ms. Obama tweeted photo, with caption: "It seems like yesterday that @BarackObama and I were taking our girls to @57thstreetbooks store. Today, I was there with a book of my own. Thanks to everyone who braved the cold and stopped by. #IAmBecoming"

It did not matter to students or local bookstore members that the weather app warned temperatures would drop to the 20s last Sunday. The instant Seminary Co-Op Bookstore announced at 11 a.m. that former First Lady Michelle Obama would be coming to celebrate the release of her memoir Becoming, excited fans—some still in their pajamas—bolted to the bookstore to purchase a ticket. The event sold out completely in a matter of hours, with people buying 500 tickets and 800 books in total.

Before the main event, 57th Street Books hosted a midnight release party to celebrate Obama’s debut as an author. Blue and white balloons hung from the ceiling and the walls; hot cocoa, coffee, and #IAmBecoming cookies were placed on the tables; and #IAmBecoming cards were taped throughout the bookstore with hopeful messages. Some cards stated its writer’s hope to become “kinder,” “happier,” or “patient,” while others took the time to make light jokes, remarking that they would become “$32.50 + tax poorer” or “an efficient procrastinator.”

Seminary Co-Op director Jeff Deutsch reflected the enthusiasm bustling around the shop, commenting, “The moment the former first lady signed the book deal with us, we immediately began planning this event. This is the most important book in our neighborhood, because she is one of the most accomplished women in our community who inspires us all because she is so human. Even before she was the first lady, we were her biggest fans. It’s so thrilling to see her come back home, especially to the bookstore she was a member of since 1985!”

“She is admirable to not only Black women, but to all woman for her bravery,” an attendee said. “This book is raw, unedited—she is out of the White House, after all—and her vulnerability will encourage people.”

The celebration ended with a countdown to midnight followed by the distribution of the first copies of Becoming.

The following afternoon, though the temperature dropped to freezing, people hurriedly rushed their way to the Seminary Co-Op. Anticipation filled the air as the serpentine line snaked around the block; all 500 people gathered in hopes of catching a glimpse of Obama before she entered the bookstore. Seminary Co-Op employees passed around hot cocoa, cider, and coffee as even the two-hour-long wait failed to dampen the spirits of the fans who eagerly anticipated the start of the event.

Explaining why she came for the event, an attendee said, “Michelle is back home in the South Side. I think it’s so thoughtful of her to host a book signing in her hometown before her tour launches. It just shows how fantastic she is as a person.”

As the time of the event drew closer, the bookstore became a crowded maze of attendees. When the employees announced Obama’s arrival, books immediately thudded back onto the shelves in an almost-rhythmic fashion, and people could barely contain their excitement.

Obama made time to meet her youngest fans first, greeting them with a high five and offering them advice, encouraging them to work hard, and to be kind and understanding to their siblings, even when it seemed impossible. She then greeted her older fans with a firm handshake and a warm smile. Although most people had mere seconds to talk to her, she made the most of each conversation. She advised her student fans to study hard and never abandon their dreams. When called a personal hero, she broke out into a huge grin and thanked everyone for their love and support.

After meeting Obama, many fans were witnessed wiping tears from their eyes, overcome by emotion, or staring at the book in awe.

“She was more beautiful than I could have imagined,” a fan tearfully stated. “I will read this book the instant I get home.”