Philosophy professors Agnes and Ben Callard met as graduate students and got married in 2003 before coming to UChicago and getting a divorce in 2011. 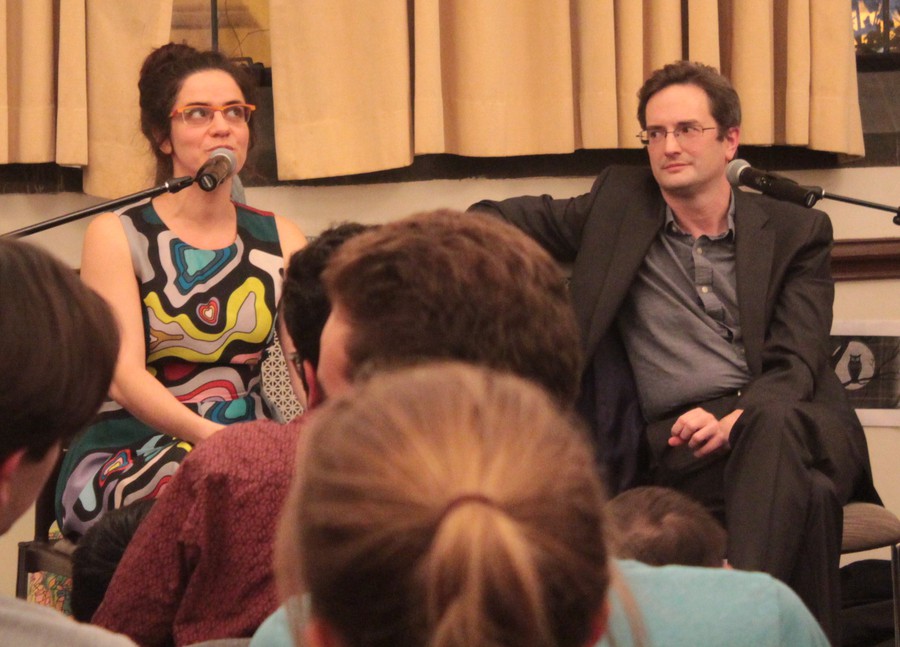 Professors Agnes and Ben Callard speak about the institution of marriage and the "philosophy of divorce."

“He just cannot believe I won’t read the questions…so my first question is: What is trust?”

Thus, with gales of gleeful and perhaps horrified laughter, began the standing-room only philosophy department’s Night Owls event on “the philosophy of divorce,” in which the once-married professors Agnes Callard, the director of the undergraduate program in philosophy, and Ben Callard, lecturer in philosophy at UChicago, explored questions around the institution of marriage and its dissolution before a packed room of undergraduates on Thursday night.

The two met as graduate students at Berkeley and got married in 2003 before coming to UChicago and getting a divorce in 2011. The pair referenced their own story infrequently, referring to examples only to illustrate the principle at hand.

From nine to midnight, the “night owls” in attendance listened to Agnes and Ben Callard consider questions ranging from whether divorces are possible, metaphysically speaking, to why the United States’ attitudes towards infidelity contrast so heavily with its actions regarding adultery, to how one ought to assess happiness. Other topics included how relationships change over time, how conventions govern relationships, and the nature of the commitment one makes in a marriage. At the start of the event, so many people had arrived at once that coordinators were turning them away at the door and telling them to come back later, once the room had emptied out.

“We certainly intended to stay together, and that intention was not satisfied,” Ben said to one of many waves of giggles as part of his response to whether or not divorce constitutes a failure. The question at hand was whether or not attendees, in a world of changing attitudes toward societal norms previously set in stone—like polygamy or open relationships—were headed inexorably for failure in a traditional marital setup.

Agnes addressed the question as well, reminding the audience of the tendency of the act of philosophical inquiry to demotivate others.

“How much is philosophy setting us up for failure? A whole lot!” she said, arguing that the field tends to demotivate because each generation continues to ask the same questions about existence and life as a human being. However, she continued, this doesn’t mean philosophy has ceased to be worthwhile, and the same thought could be applied to marriage, even those that end in divorce rather than death.

She also referenced previous thinkers who advocated for an eternal pursuit of an unreachable standard as a case mirroring the attempt at a “perfect marriage.”

“Socrates thought, ‘[trying to attain the unattainable] is fine because your soul is immortal,’ so it’s fine to keep trying to do the impossible,” she said.

Following this, one attendee proposed the idea of a five-year contract marriage, with periodic reevaluations to assess whether both participants wanted to stay married. Both speakers responded thoughtfully, noting that marriages are for lifelong commitment—and that even if it doesn’t work out, there seems to be a value in going all in, and merit to measuring a marriage’s success by its content instead of its duration.

Should people assess the success or failure of their marriages in terms of their happiness? The problem arising from this question, Callard noted, is that “you never get to live the other life in which you stayed married.” Moreover, this question raises the additional query of how many people are happy, and how best to measure this quality, which is perhaps not the right metric by which to measure the quality of a marriage.

“We would need to find what we take to be correlates [of divorce]: kids, money, happiness,” Agnes said.

The issue here, she added, had plagued the beginning of the session. Early on, Ben remarked that defining marriage was “much harder than [he] thought it would be,” and that on top of that was the problem of finding parameters for what made it good or bad.

“I’m not sure if there’s anything good about marriage once you define it broadly enough…even in a bad marriage, there can be good parts,” Ben said.

The next Night Owls will be on January 31, featuring George Mason University economics professor Tyler Cowen. Its title is "Economics vs. Philosophy: The Battle for Your Soul!"