By Neel Lahiri   and Zeff Worley 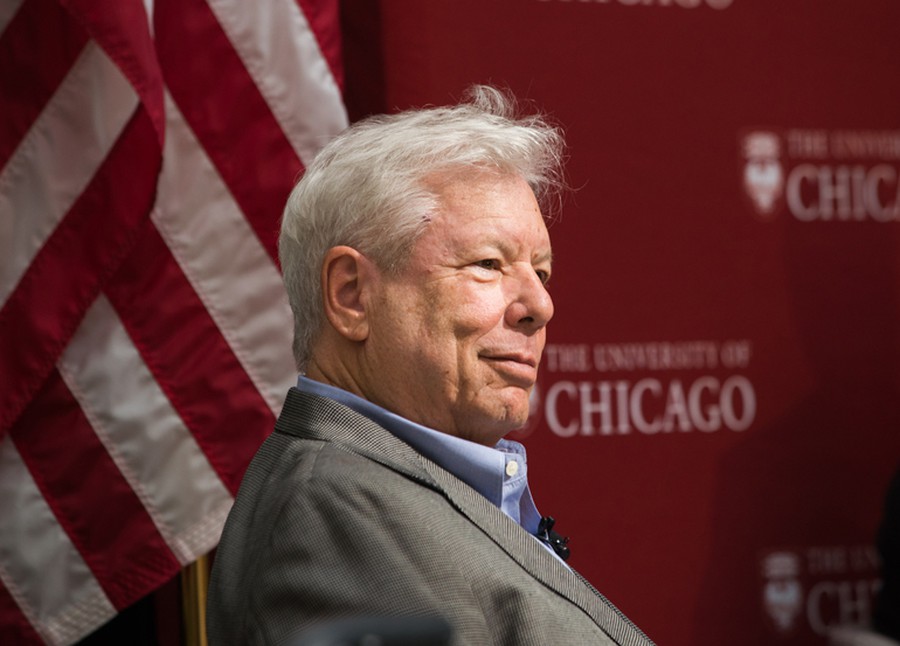 “We didn’t invent nudging. We just coined the term for it.”

Booth School of Business professor Richard Thaler and Harvard law professor Cass Sunstein, coauthors of the bestseller Nudge: Improving Decisions about Health, Wealth, and Happiness, sat down to talk about their past work and its lasting impact in an event organized by the Becker Friedman Institute (BFI) on Thursday. Economics professor Michael Greenstone moderated the freewheeling discussion in front of an audience of hundreds at the University of Chicago Lab School.

Their work casts institutions as “choice architects” to give people “nudges” in different directions. Nutritional fact labeling, opt-out savings deduction programs, and opt-out organ donation all frame a particular choice in a certain way and reflect nudging in action. Sunstein used the metaphor of a GPS system to further elaborate on the concept of a “nudge”: “Think of a GPS device as a mechanism that preserves freedom of choice, but also steers people in a direction that they have specified.”

Given this, Nudge suggests that institutions set the “default choices” to encourage certain behaviors, while also preserving the person’s ability to choose. They classify nudges as “libertarian paternalism”—paternalistic in the sense that people’s behavior is being directed in a certain way, but libertarian in the sense that their freedom of choice is retained.

Both professors stressed automatic enrollment as one type of “nudge” with significant real-world impact. “If you see a 50-year-old that has a total of $3,000 saved, you know, it’s a good guess that that’s too little,” Thaler explained. “And if we can automatically enroll them into a savings plan—that they can opt out of—they save a lot more.”

According to Sunstein, choice architecture is already ubiquitous. However, he also mentioned that a population could have a negative reaction to being nudged and said that its potential emotional effect must be considered.

Thaler hopes that choice architecture will one day help to address issues such as voter registration and environmental change, but also emphasized that nudging can have no effect, or could even be abused, calling this sort of choice architecture “sludge.” He pointed to his own experience with a popular newspaper’s online paywall and the difficulty involved with cancelling its subscription.

“You can absolutely nudge for evil, or nudge for profit,” he said. But the “best” choice architecture, the speakers relayed, leads to the greatest general welfare.

Both professors acknowledged that nudges, though they should in principle only be used to beneficial ends, can be abused, especially in business. “Bernie Madoff was a master of nudging,” Thaler said. “We didn’t invent nudging. We just coined the term for it.”

In the latter portion of the discussion, the professors emphasized the benefits they saw to pursuing a career that students actually found rewarding, as opposed to making the most “rational” choice.

“There’s no need to do something that you hate. You’re too talented for that. Find something that’s at least fun, and rewarding, and self-fulfilling,” said Thaler.

Sunstein encouraged young researchers to follow “that tingle or tickle” that comes with an interesting idea, “because what you spend on your time on…that will be for you time really well spent, and chances are unusually good that you’re going to end up doing something that’s worthwhile.”