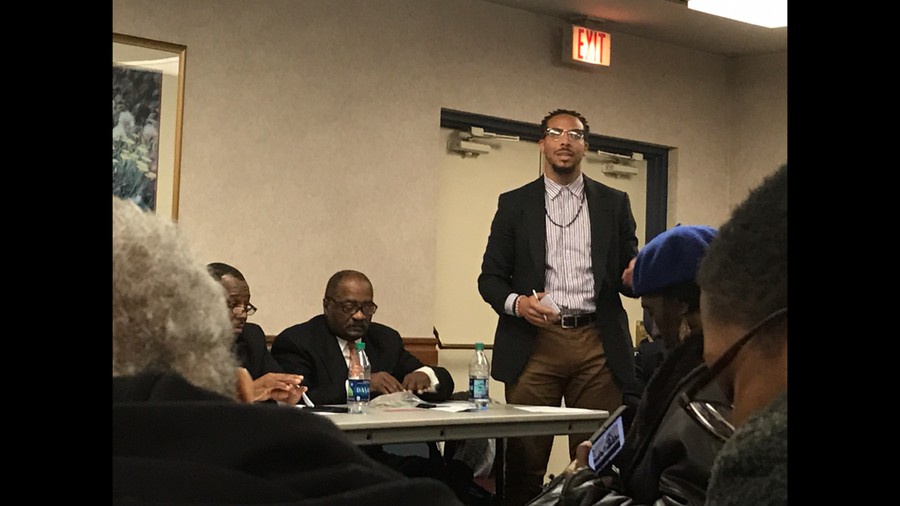 Nine of 15 candidates in the heated 20th Ward aldermanic race gathered in a forum at a church near campus last week.

Pastor Torrey Barrett, the founder of the nonprofit K.L.E.O. Community Family Life Center, hosted the forum at the Apostolic Church of God on 63rd and Dorchester.

Candidates shared opinions about a potential Community Benefits Agreement (CBA) for the Obama Presidential Center (OPC) and detailed other ideas to improve the 20th Ward community.

Although candidates had been divided on the topic of the proposed CBA at a previous 20th Ward forum, at this meeting, the opinions of the candidates were unanimous. Two candidates—Kevin Bailey, a former civil engineer for former president Barack Obama’s high-speed rail project, and Maya Hodari, a project manager for Chicago Housing Authority—both previously stated that they would not pass a CBA ordinance, but said they would in this forum.

Jeanette Taylor, a former chairperson for the Mollison Elementary Local School Council, grew emotional while speaking on the topic of resident displacement earlier during the forum. She discussed her own experience of being displaced after property taxes rose, going on to say, “I’m tired of being pushed out by people who don’t represent me.”

“We need to bring all resources together to make sure this ordinance passes,” added Cassius Rudolph, a religious leader and graduate of Columbia University’s Union Theological Seminary.

Bailey, meanwhile, called for a provision in the CBA to freeze property taxes for native residents.

Later, the candidates were asked what their Plan B would be for a CBA, since most of City Council and the Obama Foundation have already stated that they will not sign an agreement.

Real estate attorney Quandra Speights suggested that there needs to be a transition process for local residents to work at the OPC. The Foundation has voiced support for local hiring initiatives, and recently hired a diversity consultant to help recruit local companies for the OPC’s construction.

Taylor, meanwhile, held firm in her original stance, saying, “There should not be a Plan B.” In response to this, Barrett, the moderator, said that the next alderman will have to start thinking about a Plan B, because an agreement does not appear imminent. Barrett’s statement drew both approval and condemnation from the crowd.

In the upcoming election on February 26, residents of 5th and 20th Wards will vote on a referendum to instruct their aldermen to support a CBA ordinance. The ordinance would include a property tax freeze.

Overwhelmingly, the candidates emphasized that whatever change happens in the 20th Ward must involve input by its citizens.

“I believe that change has to happen, but it has to happen with us, not to us,” Taylor said. Speights echoed that sentiment, while also suggesting a need for more open dialogue between residents and those in power.

Toward the end of the audience participation section, another spectator challenged Bailey on a potential conflict of interest: He currently serves as Democratic Committeeman while his mother, Maria Bailey, is the Ward’s Republican committeeman. “There’s some political dissonance going on,” the audience member observed.

Although Maria Bailey was elected 20th Ward Committeeman in 2016, she ran unopposed, garnering 99 of 103 votes. Furthermore, according to the conservative publication Illinois Review, Bailey’s views may not align with those of a typical Republican: “She had a Pritzker sign in her front yard,” the article reads.

Maria Bailey, who was in the audience, took the microphone to confirm that this belief is shared by fellow committee members, saying, “They don’t pay attention to me because they say I’m not Republican.”

Kevin Bailey initially seemed to attempt to skirt the inquiry by answering an earlier audience question about public health. When directed back to the question about his mother, Bailey said, “She is a Republican, but she serves our community.”

Several of the candidates also pinpointed root problems that continue to plague the community. Driver, for instance, spoke at length about the high levels of lead in Chicago’s water, mentioning a direct correlation between large amounts of lead and violent behavior.

Earlier this year, Driver pushed and canvassed for a referendum that would raise revenue for the city to replace lead pipes. However, the referendum has not been included as part of the upcoming ballot.

With the February 26 election looming, the candidates repeatedly asserted a need to rekindle trust between the 20th Ward community and its representative. The previous alderman, Willie Cochran, was indicted in 2016 for taking bribes and embezzling ward money for personal use, while two of the three aldermen before Cochran had also been charged with various crimes.

“The 20th Ward has not been represented for a while,” said candidate and nightclub owner Clifton Pierce.