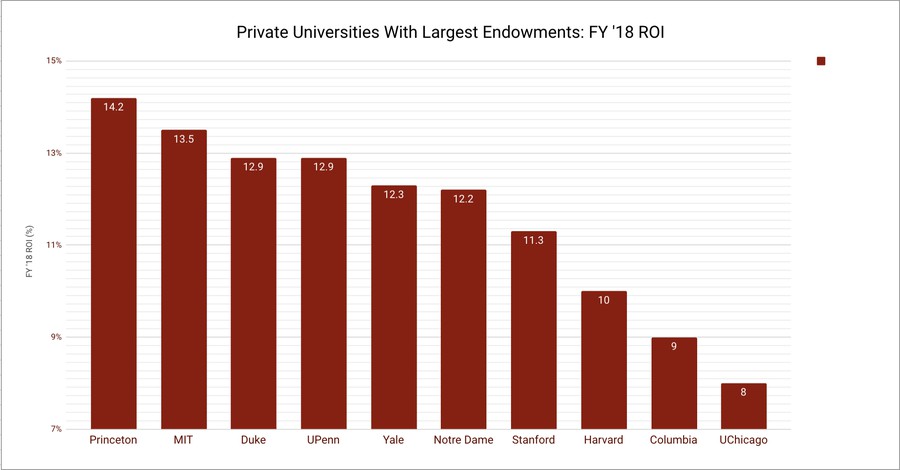 UChicago’s endowment saw an 8 percent return on investment during the most recent fiscal year, climbing to an all-time high of $8.2 billion as of June 30, 2018, the University announced last week.

The relatively low returns may reflect UChicago’s more conservative investment strategy, which has acted as a hedge to its aggressive spending on development. The University is significantly more leveraged than most peer institutions, as administrators have pursued a number of major development projects in the last decade—shuttering a number of scattered, smaller dorms to build multiple new housing complexes, expanding treatment at the Pritzker School of Medicine, and constructing a science building to house the new Institute for Molecular Engineering (IME).

The return rate is smaller than last year’s 11.4 percent return, and falls just beneath the 8.3 percent national median return on endowment for colleges and universities, as estimated by the investment firm Cambridge Associates.

While annual returns vary and generally reflect market trends, rather than recent changes in investment strategy, the conspicuous gap between peer schools and UChicago’s returns on investment (ROI) is nothing new. Still, the endowment has more than tripled in size over the past two decades, climbing from $2.3 billion in 1998 to over $8 billion today. 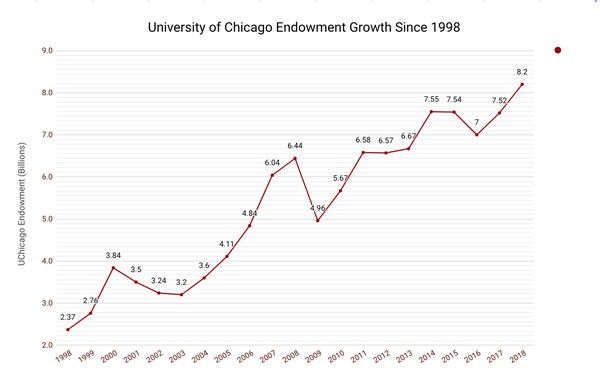 The value of the University of Chicago's endowment has more than tripled in the past two decades. 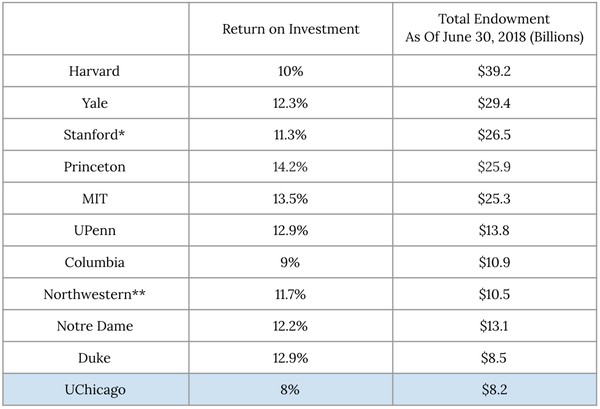 *$26.5 billion as of August 2017 (cites Stanford’s most recently released data; 2018 endowment valuation not yet released). **Northwestern does not release endowment and returns data until later in the year. Numbers shown for FY 2017.

University Vice President and Chief Investment Officer Mark Schmid and other officers in the Office of Investments and the Investment Committee of the Board of Trustees have written publicly about the University’s relatively conservative investment strategy.

The University has put much heavier weight on various risk factors than most comparable endowment management firms—and notably more than Yale Management Company, whose chief investment officer, David Swensen, has achieved something of celebrity status among institutional investors.

In a 2012 article for NMS Exchange, a management investment forum, Schmid and Que Nguyen, then managing director of strategy, defended the University’s “integrated” approach to asset management. Whereas other universities downplay long-term risk factors, Schmid and Nguyen wrote, UChicago’s approach “puts risk monitoring and budgeting at the center of our governance structure.”

Schmid and Nguyen also insisted that because of differences in strategy, UChicago endowment growth is incomparable to that of other top institutions. “Our decision to have a lower equity and illiquidity risk posture than many large endowments creates an incomparability between our returns and those of our peers,” they wrote.

In a 2014 article in the same bulletin, coauthored with by Chief Risk Officer Mike Edleson and Chief Operating Officer Patrick O’Hara, Schmid more explicitly addressed the reasoning behind the University’s conservative approach to risk.

“The university feels tangible pain from a market drawdown in a quite nonlinear way, especially in view of enhanced operating and financial leverage coming out of the last crisis, when a very successful strategic program of ‘enhanced eminence’ was implemented here,” the piece reads.

The article is also sprinkled with eccentric dicta on financial planning. Schmid and coauthors note that “risk and return are the yin and yang of the financial universe.”

In concluding paragraphs, the authors offer a string of inventive metaphors for building "risk culture."

“It’s sort of like walking, though. You get an idea of where you’re going, and maybe why, and then it is just one-foot-in-front-of-the-other. It’s a journey, not a destination. OK, it’s a destination too,” the authors write in a section titled “Building Risk Management.”

All considered, the piece is perhaps best read as a nontechnical gloss on financial strategy.

This was confirmed to The Maroon by two congressional aides, though lawmakers were still determined to include the tax according to the Post.