UC Dems and the UChicago Political Union give candidates a platform to speak to students and community members. 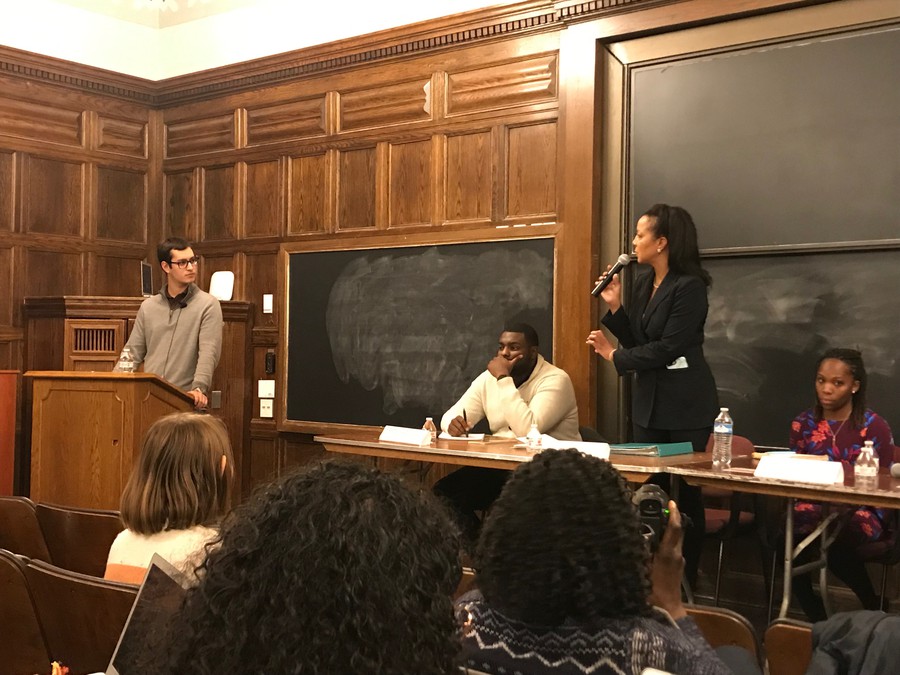 Six of the 15 20th Ward aldermanic candidates spoke to students on campus last week about their proposed solutions for issues in the ward.

A hot topic in the forum—hosted by the University of Chicago Democrats and the UChicago Political Union in the Social Sciences Research Building—was the role of anchor institutions such as the forthcoming Obama Presidential Center (OPC) and the University of Chicago. While the OPC will not lie in the 20th Ward but in the neighboring 5th Ward, many 20th Ward residents expect to be affected by the influx of economic activity once the OPC arrives.

Quandra Speights, an operations team lead at J.P. Morgan Chase, said she sees a CBA as a way of ensuring the OPC and the University act as “good neighbors.” Taylor, Johnson, and Speights all touted elements of the proposed CBA ordinance that aim to bring economic, educational, and other opportunities to the South Side, such as the requirement that all schools within a five-mile radius of the OPC have libraries.

In February’s city elections, residents in the First, 22nd, and 23rd Precincts of the 20th Ward will vote on a referendum that asks whether or not City Council should pass a CBA ordinance. This referendum is nonbinding: Were it to pass, aldermen would not be required to pass the ordinance. The newly elected 20th Ward alderman, however, could help in getting City Council to discuss the ordinance on the Council floor.

Candidates agreed that anchor institutions like UChicago have a responsibility to promote economic growth and consider the residents of the community in their actions.

Johnson mentioned the Polsky Center as a potential avenue for University involvement in promoting local businesses.

Taylor said that “not a good percentage of the people that work” at UChicago come from the surrounding neighborhoods and emphasized the need for a discussion with the University about “give and take.” According to the diversity and inclusion section of the University’s website, about 3,000 staff members live in the surrounding neighborhoods. The most recent numbers on the UChicago Data site shows that UChicago employs 24,062 staff members in total.

When asked about rising housing prices that threatened to push residents out of the ward, Speights and Maya Hodari, director of development at the Chicago Housing Authority, emphasized awareness and use of government funding programs like the Neighborhood Housing Services, which provides loans and other services to help people buy, keep, or fix their homes, and Choice Neighborhoods, which provides funding from the Department of Housing and Urban Development (HUD) to renovate public or HUD-assisted projects.

Anthony Driver, an activist and former employee of the Chicago Mayor’s Office of Public Engagement, discussed the need for capital in the community and how banks have contributed to gentrification, and proposed establishing a credit union for 20th Ward residents to access funds to secure housing.

“I want to give residents access to capital so they can build on those [vacant] lots, as long as you’re from that community or from that zip code,” Driver said.

All candidates said they support efforts to help bring formerly incarcerated people back into the job market, such as increasing counseling services and automatically expunging criminal records after no new offenses for a certain number of years. Speights described her experience hiring an individual with a criminal record as a human resources employee at Ford Motor Company.

“As long as they were honest about their criminal history and gave us the opportunity to have a conversation with them, I hired every single last one of those individuals,” she said. “So I definitely feel we should not hold peoples’ criminal records against them.”

On public safety issues, much of the conversation involved improving relationships between police officers and the community. Many supported civilian oversight and policing institutions like the Civilian Police Accountability Council—a proposed council of representatives elected by each of Chicago’s 22 police districts. Many also talked about improving community driven policing strategies such as Chicago Alternative Policing Strategy (CAPS).

Hodari is campaigning on public safety as one of her main platforms and emphasized the importance of healthy community-police relationships.