Art Institute Soars With Paintings of the Floating World 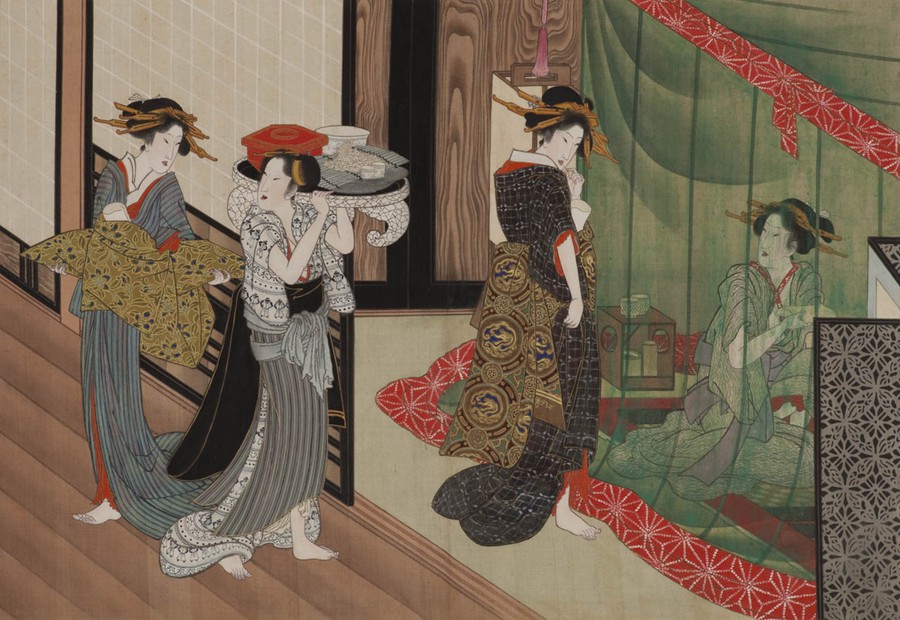 A painting from "One Hundred Looks of Various Women," 1816, by Utagawa Toyokuni

Courtesy of The Art Institute of Chicago

One of the first things that comes to mind when reflecting on Japanese culture is its love of aesthetics, evident in beautiful anime like Kimi no na Wa (Your Name), delicately arranged bento lunches, and the Pokémon plushies that line my window ledge. The Art Institute’s special exhibition, Painting the Floating World, proves to be no exception, revealing that this love for exquisite beauty is something Japan has cherished for centuries.

The ukiyo-e paintings, literally “paintings of the floating world,” flourished in the 17th through 19th centuries of modern Japan, particularly in Edo and Kamigata. The term “ukiyo” originated in Buddhism, describing the transience of life. However, as the paintings were popularized, the term evolved to define the urbanization and boom in the entertainment empire, specifically with the Kabuki actors, celebrities, and courtesans of pleasure quarters. In a time during which the shogunate implemented class distinction and political manipulation, these paintings—either in the form of a commission or a replicable—fostered a sense of free expression. They make a viewer wonder whether ukiyo-e actually acted as a facade for the harsh political tension during the shogunate reign.

On the lower levels of the Art Institute, a sample of the vast gallery overhead is positioned close to the permanent Japanese exhibit, with hanging commissioned woodblocks depicting the dramatic stance of a Kabuki actor or a seductive glance of a beautiful woman, or bijin-ga. A gallery attendant at this section was quick to point out the imaginative designs of the kimono—often, the decorations on the women’s kimonos had exaggerated patterns, possibly to accentuate the ethereal beauty of the bijin-ga.

When I walked up to the second floor and into the main gallery, I was instantly touched by the traditional Japanese music softly thrumming at the entrance of the labyrinthine exhibit. Long scrolls of portraiture, landscapes, and poetry brimmed from the walls, some even sloping across an entire gallery, stained with vivid reds and paint made of melted gold. The exhibit was designed in a circular fashion, with the first part concentrating on the earliest forms of the ukiyo-e. The famed bird’s-eye view sketch of Tokyo boldly introduced the attendees to the artworks, meticulously drawn such that not even the paper windows on the tiny houses were forgotten or glazed over, with beautiful patterns bordering the edges of the scroll. Quite jarring in this section, however, were the showcases of explicit sexuality, both in Kabuki performances and in private life. In the paintings of Kabuki performances, young, handsome male actors, wakashū, were portrayed with delicate features and strong stances. With a spark of curiosity, I snuck into a hidden area in the exhibit, wondering why it was closed off from the rest. The reason became clear upon first sight: Within discreet scrolls that spanned several feet, the “spring pictures,” or shunga, showcased explicit scenes of passionate sex between members of different social classes. Many of the shunga were kept as family heirlooms, or used as guides for a virgin bride on her wedding night. Although an amusing and uncomfortable concept now, these scrolls were actually guardians against natural disasters, including fire, and were to be respected as works of high honor.

The next parts of the exhibit explored the evolution of beauty standards in Japan, usually through the forms of female courtesans and geishas. When I inquired about the differences in poses among the portraits, a gallery attendant informed me that a lifted skirt suggests walking, a folding fan or an instrument hints at the woman in the painting or print being a geisha, and a glance over the shoulder is, in modern terms, “bedroom eyes.”

Perhaps the most popular part of the exhibit was that concerned with the golden age in the 18th century; attendees crowded over the prints in the Hundred Beauties gallery, which depicted women spanning multiple statuses, from ladies of the court to the lowly streetwalkers. Although beautifully embroidered, like the rest of the scrolls within the entirety of the exhibit, the scenes within each painting were sometimes grotesque, such as the imagery of a group of prostitutes disgustingly eating meat off of bones, with gleeful expressions pasted on their faces.

The last gallery, at the end of the circular exhibit, showed off the transformed standards of beauty, with the elongated face, large nose, and eccentric, lopsided poses. With the restoration of the emperor and disintegration of shogunate power, tales of nostalgia loomed within some of the ukiyo-e, which pictured legendary ancient heroes, famous celebrities, or even poetry written in cursive, swooning over the beauty of a geisha.

After parting with the ukiyo-e, as I faced the adjacent "Hairy Who?" exhibit, I was left with my curiosity for Japanese aesthetic both heightened and satisfied. Was it this chronology of transforming beauty that inspired the still-sensual contemporary anime? Were these continued after photography was introduced to the modern era? Perhaps so, but one thing does remain clear: This admiration for glamor and elegance still impacts our views on beauty today, which we continue to value, question, and modify as do the beauty standards of the past.