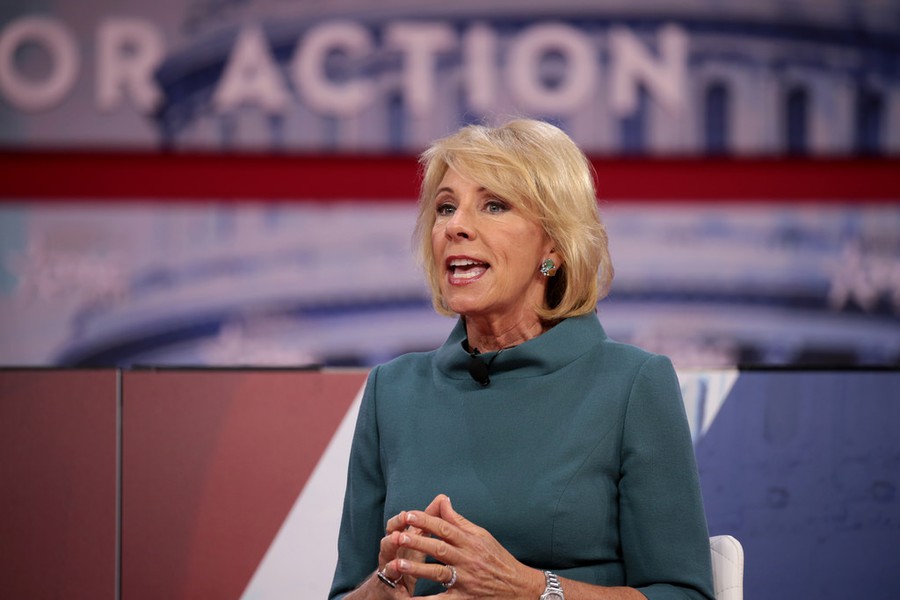 Under the new guidelines, which are open for public comment through January 28, students accused of sexual misconduct will have the opportunity to cross-examine accusers and witnesses in a live hearing, among other changes that mark a radical shift from Obama-era policy. Several changes also conflict with Illinois law.

The regulations update several key provisions of Title IX, the civil rights law prohibiting sex discrimination at schools that receive federal funding. Advocates for survivors of sexual assault have expressed concerns that the new guidelines weaken already insufficient protections for victims, and civil rights groups including the American Civil Liberties Union say the update would unfairly favor perpetrators. Meanwhile, proponents of the change argue that it is an overdue corrective on Obama-era guidelines that opened up universities to unreasonable liability and made it too easy to convict those accused of misconduct.

While many of the proposed changes are not compulsory and unlikely to affect the University’s handling of Title IX cases, others will likely change procedures followed in disciplinary hearings and incident reporting. Wolfe said she is working under the assumption that the University will receive finalized regulations in summer 2019. At that point, administrators will audit existing procedure to determine necessary changes.

Wolfe stressed during the talk that administrators, including members of the Office for Sexual Misconduct Prevention and Support, do not anticipate a major overhaul, especially as many of the updated guidelines are not mandatory.

“We’re not interested in making a whole lot of radical changes with our policy or process, and so we’re kind of doing a wait-and-see approach to what’s going to happen next,” she said.

One of the most controversial updates would require that universities allow complainants and respondents in formal investigations to cross-examine each other, and witnesses, during a live hearing. The accuser and accused would have the opportunity to ask questions of the other party through an adviser, or what Wolfe calls a “support person”—likely a friend, relative, faculty member, or attorney.

The Department of Education under former president Barack Obama had discouraged cross-examination, arguing in a 2011 Dear Colleague letter that “allowing an alleged perpetrator to question an alleged victim directly may be traumatic or intimidating.”

Illinois adopted this recommendation at the state level in its 2015 Preventing Sexual Violence in Higher Education Act (PSVHEA), which UChicago is mandated to follow. The PSVHEA does not allow for the alleged perpetrator and the alleged victim to cross-examine each other, but allows them to submit questions that university administrators may choose to ask the other student.

Meanwhile, DeVos’s proposal argues that those accused of assault have been denied due process under Obama-era guidelines. The proposal cites the recent opinion of the Sixth Circuit Court of Appeals in Doe v. Baum, a case brought against the University of Michigan in which the court held that public universities must give students the opportunity to cross-examine accusers. “Not only does cross-examination allow the accused to identify inconsistencies in the other side’s story, but it also gives the fact-finder an opportunity to assess a witness’s demeanor and determine who can be trusted,” the ruling reads.

Also citing the court’s reasoning in Baum, the proposal contends that conducting cross-examination via an adviser can mitigate trauma for a complainant and “accomplish the benefits of cross-examination…without subjecting the accuser to the emotional trauma of directly confronting her alleged attacker.”

A major gray area in the guidelines concerns whether universities will be mandated to provide an attorney if one party in a suit cannot afford representation.

The proposal stipulates that “if a party does not have an advisor at the hearing, the recipient must provide that party an advisor.” However, it does not specify whether that adviser must be an attorney.

Wolfe indicated that this ambiguity poses major equity concerns, potentially giving one party the unfair advantage of legal representation. Further, Wolfe noted, if universities are required to underwrite lawyers, this would seem to run counter to the DeVos guidelines’ stated aim of reducing university costs.

DeVos’s guidelines update the Obama administration’s definition of sexual harassment—“unwelcome conduct of a sexual nature”—to a stricter standard including only “unwelcome conduct on the basis of sex that is so severe, pervasive, and objectively offensive that it effectively denies a person equal access to the recipient’s education program or activity.”

In a statement to The Maroon, PSA expressed concern about the narrower standard, arguing that “survivors will have to endure repeated and escalating levels of abuse until they can actually seek help from their institutions.”

The proposed rules also narrow the jurisdiction of Title IX activity, meaning that formal complaints would be limited to conduct that took place on campus—that is, housed within a university educational program or activity. Schools would not be required to investigate activity occurring on property owned by groups not affiliated with the university, such as off-campus housing. Still, education attorneys expect colleges to continue investigating off-campus sexual misconduct, Inside Higher Ed reported.

Under incoming regulations, schools could choose between the “preponderance of the evidence” standard currently in place at UChicago—a more than 50 percent likelihood that alleged misconduct occurred—or the “clear and convincing” standard, which sets a higher bar of proof. Universities would be required to apply the chosen evidentiary standard across all conduct code violations, rather than applying a lower standard to sexual misconduct cases.

The PSVHEA mandates that Illinois schools follow the preponderance of the evidence standard.

Some updates, including required cross-examination and a higher standard of evidence, are in direct conflict with Illinois state law.

Wolfe encouraged students to review an open letter students drafted at the Illinois Student Sexual Misconduct conference, which will be delivered to incoming governor J.B. Pritzker and Raoul. The letter, sponsored by Student Government Vice President Malay Trivedi, urges the lawmakers to fight for Illinois state law to override the federal guidelines.

In a statement to The Maroon, PSA said “the proposed Title IX regulations harm survivors in multiple ways in the name of ‘cost saving,’” and singled out several key areas of concern, including the reliance on a narrower definition of sexual harassment, the option to adopt a higher standard of evidence, and the introduction of live cross-examination during disciplinary proceedings.

Concluding her talk, Wolfe expressed concern about the planned changes.

“I feel badly that this is happening because I feel like there was a corner being turned here, with regards to these types of cases on campus, and I don’t know if universities will be taking a step back,” she said.

College Republicans did not respond to The Maroon’s request for comment on the Trump administration’s proposed changes.