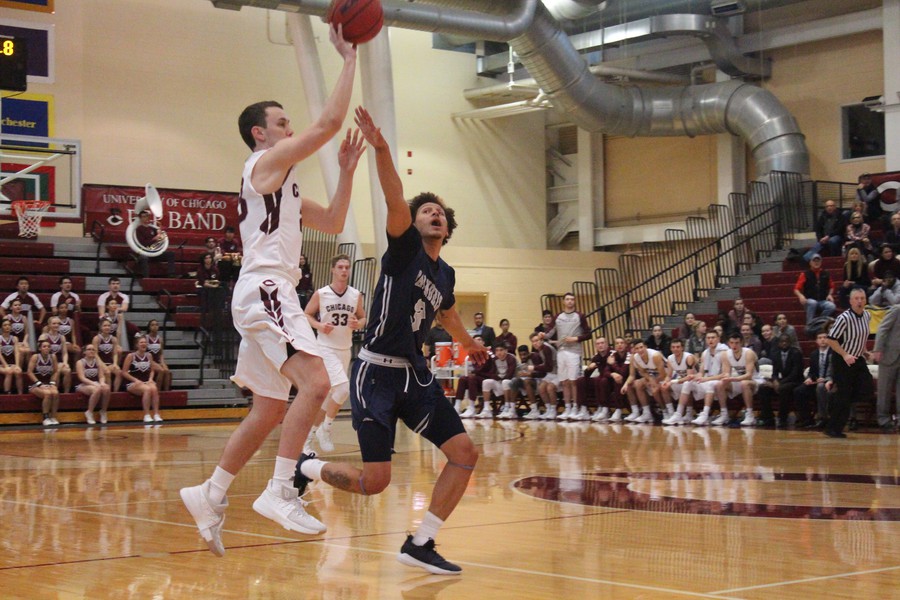 Second-year Jake Berhorst zips a pass across the court.

Coming off a road split against two of the best teams in the UAA, the Maroons are increasingly optimistic heading into the second half of UAA play. Despite an 8–10 record, Chicago stands at 4–3 in UAA play and is still in the hunt for a UAA title. What makes UAA basketball unique are matchups like the one this weekend. The Maroons, coming off a long trip to Atlanta and then Rochester, turn around and host the same teams this Friday and Sunday.

Solid defense and sharpshooting were two of the keys for the Maroons this past weekend. The defense held Emory and Rochester below their season averages in points. When asked about going into the second half of UAA play, fourth-year captain Jake Fenlon responded confidently by saying, “The team is feeling great and getting better every week. We know that we can beat any team in the UAA; now we just have to do it.”

Fenlon also reflected on the first half of conference play by pointing to the fact that, “We are 4–3 and tied for third place with Case and Rochester, with two of our losses coming in one-possession games to ranked teams on the road.” Hopefully, the soft rims of the Ratner Athletic Center continue to be kind to Fenlon and the Maroons as they look to avenge these losses.

Chicago has had a distinct home court advantage this year with six of its eight wins occurring at home. For this trend to continue, solid defense and sharpshooting must persist for coach Mike McGrath’s squad. Back-to-back weekends against the same teams have their “pros and cons,” Fenlon said. He continued, saying, “We are obviously excited to come home after two grueling weekends of travel. We also can’t wait to get another shot at Emory at home after a tough loss in Atlanta last week in which one of their bench players went off for 31 points. But, on the other hand, we expect Rochester will be ready to put up a fight after we upset them at the Palestra.”

Looking ahead, the schedule bodes well for the Maroons who host five out of their last seven games to round out UAA play, and the two teams that Chicago will play on the road have a combined conference record of 3–11. Fenlon touched on the rest of the conference by saying, “We feel that if we stick to our game plan each game and play well, then we have a very strong chance of winning.”

The Maroons tip off against the No. 15 ranked Emory Eagles at 8 p.m. on Friday night and turn around to face Rochester at 11 a.m. on Sunday morning.