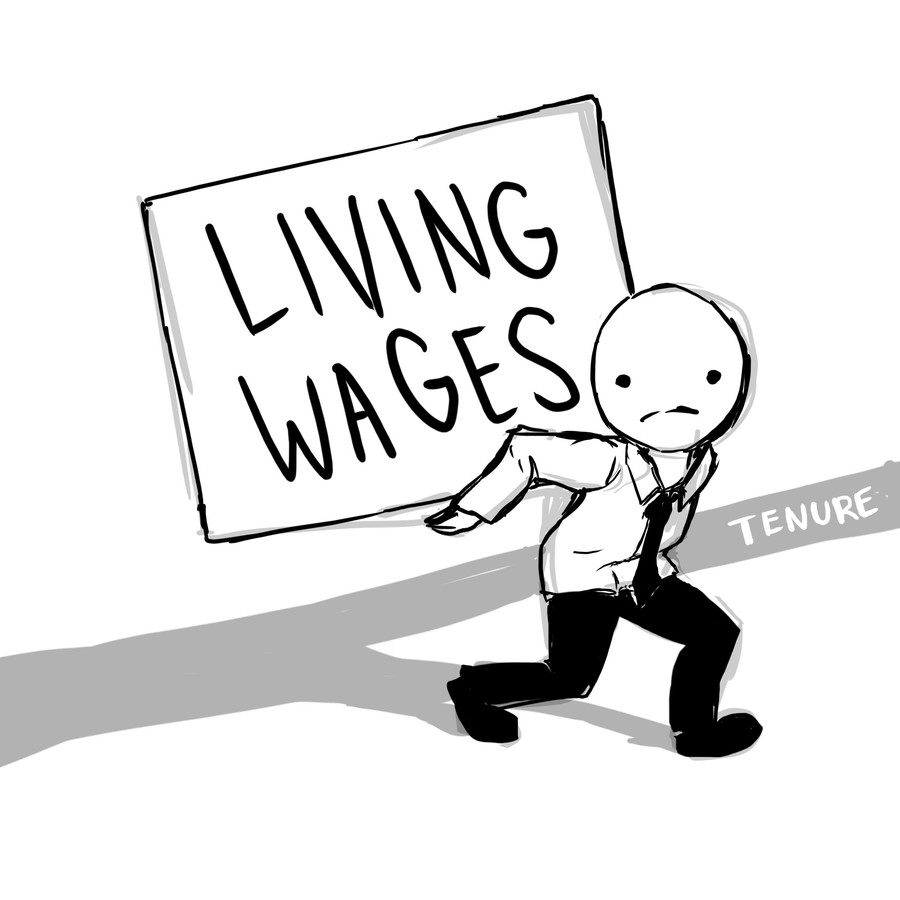 This statistic was provided by UChicago Faculty Forward. The total enrollment in courses taught by faculty in Faculty Forward unit (~11,000 per year) plus those taught by the Harper-Schmidt unit (also non-tenure-track or NTT faculty, ~3000 per year) is around 14,000 student-courses per year. There are also many NTT faculty who are not in either bargaining unit (most senior lecturers, Dickson Instructors in math, graduate students, visiting faculty, and others) for whom we do not have enrollment information. With the information available, assuming that College students on average take 10 courses per year, and given that last spring 5600 students were enrolled in the College, Faculty Forward estimates that non-tenure-track faculty at UChicago teach at least 35 percent of the total College enrollment every year.

Statements like this are a manifestation of the harmful policies the University has enacted over the past few decades that serve to lessen pay, take away benefits, and undermine the work of NTT faculty. This is why, in 2015, a group of around 200 NTT faculty at the University decided to join together and form UChicago Faculty Forward, voting to unionize in December 2015. Their union is part of a national campaign supported by the Service Employees International Union (SEIU) that has helped NTT faculty unionize on campuses such as Tufts and Georgetown.

Part-time faculty make $4,000–$5,000 for each course they teach, receive few to no benefits, and often have to hold multiple part-time positions at different institutions to make ends meet. Additionally, health care is not available through the University to the majority of part-time NTT faculty. Because most other universities and colleges across the city don’t provide NTT faculty with health benefits, those who hold multiple part-time positions often do not have access to health benefits across the board. To make matters more precarious, many part-time NTT faculty work on a contract basis, which means they are forced to reapply for their jobs at the end of each year with no guarantee that they will be rehired.

At a recent teach-in hosted by Students Organizing United with Labor, one full-time Faculty Forward member said she easily works more than 50 hours a week when time for teaching, office hours, and grading are factored in. One panelist, who teaches several popular graduate sociology seminars, mentioned that she leaves her office after midnight most nights and holds office hours at 7 a.m. to accommodate students. The University wants to increase the course load for all full-time faculty from six to eight courses per year. If UChicago were to increase her teaching load, it would strain her ability to provide a quality education for her students, forcing her to stay later and come earlier when she’s already stretched thin. At that point, she said, she may just retire.

UChicago Faculty Forward gives a voice to NTT faculty and amplifies their fight for three basic things. The first is a reasonable, living wage—not a yearly salary that is well below a single student tuition, and not teaching four courses for $20,000, or less, a year. The second is benefits that are the same as those of tenure-track faculty, including parental leave and tuition reimbursement—faculty and their children shouldn’t be valued any differently as human beings because of their academic rank. The third is an improvement in working conditions: predictable contract lengths, a path to promotion, transparent performance review procedures, and the possibility for green-card sponsorship so that good faculty aren’t discarded simply because of where they were born.

As of now, Faculty Forward is still in the bargaining process, attempting to negotiate a contract with the University. This process began in early 2016 and is being dragged out by the University even now, over two years later. If there is no contract by the end of March, Faculty Forward plans to escalate with a possible job action which could include a work stoppage—but as a last resort. Jason Grunebaum of the Department of South Asian Languages and Civilizations said, “Despite the heroic dedication of our colleagues, the promise to our students to value their education above all else is strained when faculty lack health insurance, when we're paid less than $50,000 a year after a decade, when the administration reduces the qualitative work of faculty into quantitative units of production, and when we're treated as invisible, disposable.”  Grunebaum continued, “A little moral courage and a tiny fraction of the University’s vast financial resources are all that's needed to reaffirm our collective commitment to UChicago students.”

In fact, it would take less than 1 percent of college tuition revenue to dramatically increase the pay and working conditions for non-tenure-track faculty. How can UChicago pay its president and Chief Investment Officer $3.2 million and $2 million, respectively, but not pay its faculty a living wage? How can a 20-story dorm be planned for 61st and Woodlawn, but faculty are refused access to health care? It’s the teachers, educators, staff, and faculty of the University that enrich it and give it life—perhaps it’s time to pay them a living wage.

To support Faculty Forward and learn more about their goals, sign this petition.