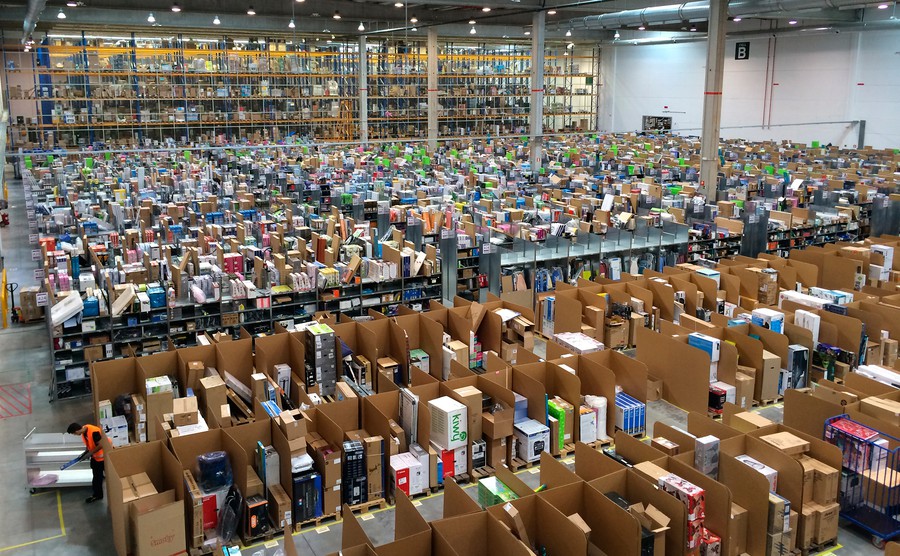 An Amazon facility in Spain.

Various organizations are trying to prevent Amazon from building its next headquarters in Chicago, or at least trying to make the dialogue between the City and Amazon more transparent.

Last month, Amazon released a short list of 20 cities under consideration for becoming the location of its next headquarters (“HQ2”), and Chicago made the cut.

One group, ANSWER (“Act Now to Stop War and End Racism”) Chicago, has created an online petition protesting the move, which has nearly 300 signatures as of the time of publication.

ANSWER Chicago is a chapter of the ANSWER Coalition, which was formed in 2001 to protest the military invasion of Iraq and is currently active in antiwar and antiracism protests, according to the group’s website. John Beacham, an ANSWER Coalition spokesperson, described it as a “national grassroots coalition that seeks to build a mass movement for real change in the U.S. and an end to war, racism, bigotry, and environmental destruction.”

According to the petition, a potential Amazon HQ2 in Chicago “would receive billions of dollars in corporate welfare and hire mostly high paid white managers, [which] would send gentrification and ethnic cleansing of Chicago's neighborhoods into overdrive…[giving] Amazon more power to keep wages low for its warehouse workers and drivers, thereby depressing wages across the board.”

The petition argues that an Amazon HQ2 would aggravate existing problems surrounding public education, healthcare, police brutality, and gender inequality, among other issues.

ANSWER Chicago’s recent activities, according to their Facebook page, have included participating in an anti-Trump march, joining a Jewish Voice for Peace rally supporting jailed Palestinian Ahed Tamimi, and appearing at a rally protesting Steve Bannon’s upcoming appearance at UChicago.

Beacham also noted that ANSWER Chicago has been involved in protests against “the Trump agenda,” initiating and carrying out protest marches, which he said cultivated “a resistance independent of the Democrats, a genuine people’s resistance, that’s against the entire establishment.”

Beacham argued that the money Chicago is offering Amazon could be used for public needs such as housing and jobs. Chicago’s financial issues and inequality “will be greatly exacerbated if the city gives billions of dollars in handouts to the richest person in the world,” Amazon CEO Jeff Bezos.

Beacham said that ANSWER Chicago is “trying to build a resistance to the city of Chicago, which is supposedly cash-strapped and doesn’t have money for anything people need” (The Chicago Sun-Times reported in February that Chicago’s bid for Amazon could be worth more than $2.25 billion.)

In October, ANSWER Chicago coordinated a protest near Mayor Rahm Emanuel’s house to demonstrate against HQ2 the day after the deadline for cities to submit bids to Amazon for them to be considered.

The protest was held on the “anniversary of the murder of Laquan McDonald,” Beacham said, “to demand justice for Laquan, not money for Amazon.” When asked about reactions to and the impact of the protest, Beacham claimed the city, state, and other establishments are working to bring Amazon to Chicago because they think it will help business and increase profits.

But ANSWER Chicago thinks that its protests, and other protests around the country, have convinced Amazon “to go quiet on the next stage of its campaign; it has asked all of the cities who are bidding to sign non-disclosure agreements.”

Currently, the group is continuing its protests through media and social media. When asked whether the group is planning further on-the-ground actions regarding HQ2, Beacham said that they want to work with other groups, but do not have any concrete plans at the moment.

Another organization, Lucy Parsons Labs (LPL), sued the mayor’s office at the beginning of this month, seeking “the full records of the City’s proposal to be selected as the site of Amazon’s second headquarters,” according to the lab’s website.

The group had filed a Freedom of Information Act (FOIA) request in November “in light of reports of massive corporate tax breaks being offered to Amazon,” asking the mayor’s office to release the full bid for Amazon HQ2. The mayor’s office claimed that the full bid was exempt from FOIA's disclosure rules, and sent the group a few pieces of Amazon-related correspondence.

The organization is now seeking to secure the release of the full proposal via a lawsuit.

In their release, LPL wrote that if HQ2 ended up in Chicago, “reports indicate Amazon workers would pay taxes [to] Amazon directly instead of the state of Illinois,” meaning that Amazon would receive more than $1 billion in tax diversion.

“Lucy Parsons Labs believes such tax measures would divert funds intended to be used for vital public resources into the hands of corporate financiers and offshore tax havens,” the statement said.

LPL describes itself as a collaborative group that deals with digital rights and transparency issues. Its previous initiatives have included operating software for whistle-blowing, investigating law enforcement property seizures, and collaborating on police surveillance devices in Chicago.

Much of its work has dealt with public records requests, according to Freddy Martinez, one of LPL's founders and its director.

“Over a billion dollars was offered to [Amazon] in tax breaks, when the entire budget of Chicago is about ten billion dollars…. We don’t actually know what was all offered to Amazon,” Martinez told The Maroon. “We requested just what the proposal was; we were denied…we think that the extent [of the proposal] shouldn’t be done in secret.”

When asked why LPL chose to pursue this issue specifically, Martinez said that issues of transparency and Amazon HQ2 “go hand in hand.”

“A lot of us think it’s not an accident that while the city is…trying to close all the high schools, essentially, in Englewood, they’re offering tax breaks to one of the richest organizations in the world,” he said. “[The] money has to come from somewhere.”

LPL is concerned with the intersection of the Amazon HQ2 bid and other Chicago financial issues, such as the potential school closings and the opening of a new police academy in West Garfield Park.

“Our fight is about finding the details of the bid,” Martinez said. “The lawsuit is part of a larger context, where we see investment in certain parts of the population of Chicago, and disinvestment from everyone else.”

Martinez said that there could be a few months until the lawsuit brings any results, and that LPL has not heard a response from the city yet.

In court, he expects the city to argue that Chicago will benefit from Amazon’s presence and will experience long-term economic growth, and that releasing the proposal will harm the city’s competitive interests in the competition for HQ2.

Martinez strongly disputed both points, citing the bidding for Tesla’s battery factory in Nevada: “You’ll find that the deals got worse and worse for the city as the process went on [because competing bids created] a race to the bottom.

“Our argument is that it will make…a worse deal for Chicago than if [they] release [the proposal] publicly,” Martinez said.

Neither Amazon nor the mayor’s office responded to requests for comment.