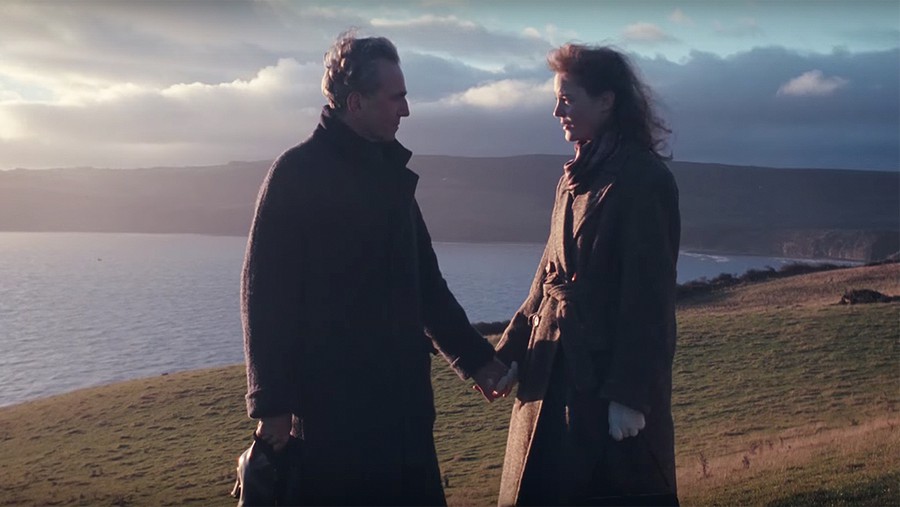 "Phantom Thread" stars Daniel Day-Lewis in what might be his final film role.

A week after watching Phantom Thread, I am still thinking about it. Regardless of anything else said in this review, that alone means that Paul Thomas Anderson accomplished what he clearly set out to do in making this movie. Phantom Thread is a haunting, contemplative, and beautifully executed story about love, art, and what makes us vulnerable. And yet, I still can’t make up my mind about it.

The story seems straightforward: The ever-wonderful Daniel Day-Lewis plays Reynolds Woodcock, an extremely skilled dressmaker in 1950s England who falls in love with a young woman named Alma (played to perfection by Vicky Krieps) who is almost as stubborn as he is. Such stubbornness is no small feat; Day-Lewis plays a perfectionist artist who is so particular it is almost comical. Simple scenes like eating breakfast become heated as Woodcock mercilessly berates his lover for eating too loudly and disrupting his morning thoughts.

To be sure, some audiences will find the film’s characters—all of whom feel as similarly detached from reality as Woodcock—hard to relate to on a human level. It stunted the film’s intended emotional impact. Particularly towards the end, some decisions made by certain characters seem impossible to understand and left me with a bad taste in my mouth coming out of the theater.

As I’ve been thinking about the movie in the days since, however, the risky decisions made by Anderson in the script have grown on me. The moments which foreshadowed the conclusion stand out in hindsight, and the characters’ decisions—while still undoubtedly strange and unnatural—lend a sense of beauty to the film’s arc. You’re not supposed to relate completely to what these characters are feeling, but rather extract truth from their experiences around vulnerability and how it is tied to love. The occasionally disturbing relationship between Woodcock and Alma seemed much more effective when I stopped thinking of the story as a straightforward romance and tried instead to read between the lines.

And there is much to read. Anderson is clearly a master director, and he has again created a classic which will be analyzed for years to come by critics and film-studies courses. Most shots are packed to the brim with messages implied in their composition, and even simpler ones are a beauty to behold. Simple shots like Day-Lewis driving a car are given a life I’ve never seen in a movie before, with a true sense of dizzying speed and motion. Complicated shots of elaborate galas are full of subtle humor and striking symbolism. If for nothing else, this movie should be experienced by every film-lover out of appreciation for Anderson’s perfected craft.

Adding another layer of excellence is Day-Lewis, who is wonderful in the role (surprising absolutely no one). He lends humanity to a character who at times seems inhuman in his relentless strive for perfection, and for that he should be commended. Also amazing is Krieps, who through her nuanced performance avoids becoming the boring audience stand-in Alma may have been if played by anyone else. I was also knocked out of my seat by Lesley Manville, who plays Woodcock’s stern sister and is the only one that seems to have any control over Woodcock towards the beginning of the film. She adds surprising comedy to the film, and I daresay even stole some scenes from Day-Lewis himself. If it weren’t for the extreme competition of the category, she would easily merit the title of Best Supporting Actress at this year’s Oscars.

Radiohead’s Jonny Greenwood also produced an exceptional score that deserves mention: It is undoubtedly one of the best examples in recent memory of composer and director working in perfect harmony, and the movie would have felt empty without it. It is a score worth revisiting after the credits roll, an unusual achievement for a film score.

Even more unusual is that I can’t tell you how you will feel about this movie. You may very well be put off by some of the decisions made by Anderson’s portrayal of the characters, or in the way the plot evolves as the movie concludes. You may also find it boring, as most of the movie revolves around exploring the human traits of some decidedly unrelatable characters. But if you focus on the sheer quality of the art put forth in this film from both a production and performance standpoint, and if you let the ideas of the movie sit with you for a few days, I think there is a good chance you will have a unique and memorable film experience.