On display are artifacts from Enrico Fermi and other scientists at the Met Lab, which researched nuclear reactions during World War II. 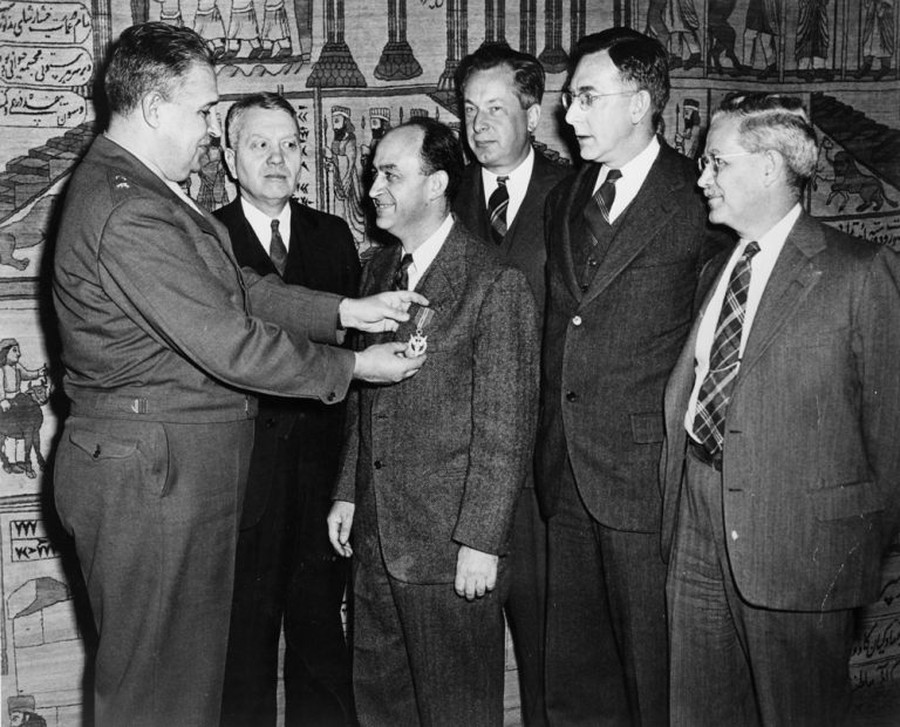 The director of the Manhattan District awards physicist Enrico Fermi and other University scientists Medals of Merit for their role in the successful development of the atomic bomb.

The Regenstein Library Special Collections is currently displaying an exhibit on the University’s role in the development of the atomic bomb and how University scientists reacted to the bomb in the decades after its invention. The exhibit, titled Science and Conscience: Chicago’s Met Lab and the Manhattan Project, began today and will continue until April 13.

The exhibit comprises manuscripts and artifacts from the scientists who worked in the Metallurgical Laboratory (Met Lab), the code name for the University lab that investigated nuclear reactions during World War II, including a letter written by then-President Harry Truman defending his decision.

“The exhibit traces the organization of the Manhattan Project and the Met Lab,” said Daniel Meyer, director of Special Collections. “The materials that are in the exhibit are drawn from the scientists’ personal papers that they kept in their laboratories during the course of their careers.”

In addition to declassified government files and personal letters, the exhibit includes other notable artifacts, such as Enrico Fermi’s 1938 Nobel Prize in Physics.

“He went to Stockholm to receive the award, then instead of returning to Italy, he and his family went via London to New York,” Meyer said. “Fermi’s wife was Jewish, and they were concerned about the anti-Semitic laws that were being passed.”

Fermi was in charge of creating the first Nuclear Reactor, Chicago Pile-1 (CP-1). The experiment was conducted under the west stands of the old Stagg Field, a site now marked by Henry Moore’s sculpture Nuclear Energy.

“The original intention was to build [the reactor] out at the Argonne Forest Preserve,” Meyer said. “They were going to have a building constructed and put the Pile inside it, but there was a labor strike.” With the fear of losing momentum, the project decided to conduct the experiment under Stagg Field.

“They trusted Fermi’s calculations that the experiment could be carried out successfully and that the reaction could be controlled,” Meyer said.

In early 1943, the reactor was disassembled and taken out to the Argonne Forest Preserve, where it was put back together as Chicago Pile-2. The University continued to play a prominent role in the Manhattan Project, however. The Met Lab used dozens of campus buildings, including Eckhart, Ryerson, and Kent, and several new buildings were constructed for it. The exhibit contains booklets and pamphlets detailing proper security protocol for members of the Met Lab.

“All of the buildings that the Met Lab occupied were guarded,” Meyer said. “There were a lot of instructions to the staff about security. It was an ongoing concern at this site and at other sites of the Manhattan Project that espionage might be taking place.”

At any given time during World War II, the Met Lab employed about 2,000 people on campus. This number decreased to 1,300 after the war, Meyer said. To minimize security risks, the University housed hundreds of Lab employees on campus in a large building where Eckhardt Research Center now stands.

After Germany surrendered in May 1945, a group of scientists led by James Franck petitioned the government against the use of the atomic bomb on humans.

“Franck tried to get the government to think through different options before dropping the bomb,” Meyer said. He proposed that the United States set off a demonstration bomb to show the world the bomb’s destructive capabilities.

In 1946, the Met Lab was turned into Argonne National Laboratory. Some personnel from the Lab were transferred to the newly created Fermi and Franck institutes, which focus on the study of nuclear and molecular science.

“The second part of the exhibit is really about how scientists who worked on the Manhattan project and at the Met Lab reacted to the dropping of the bombs on Hiroshima and Nagasaki,” Meyer said. “They began to organize an effort to pass legislation that created the atomic energy commission, which put atomic energy under civilian control.”

The exhibit is on display on the first floor of the Regenstein Library.