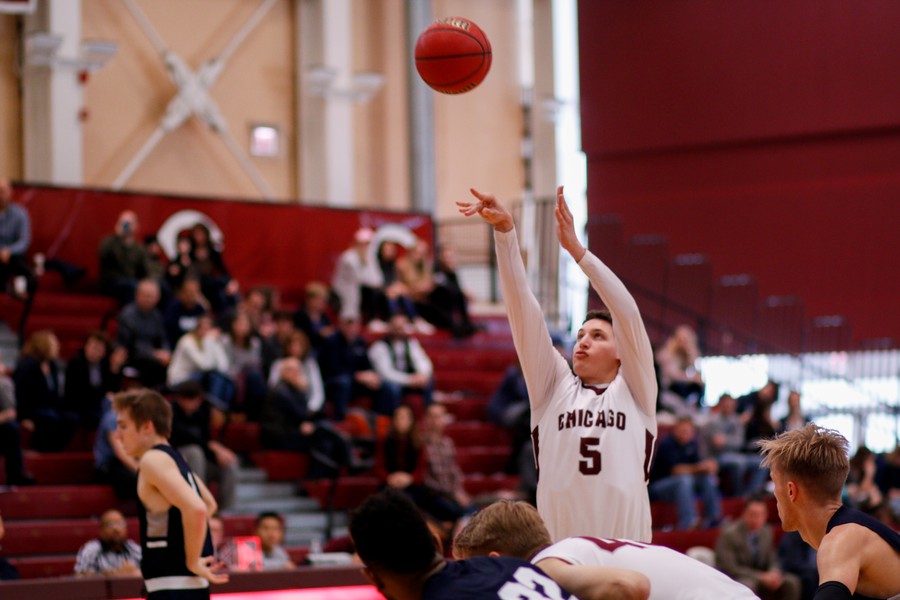 The Maroons look to wrap up UAA play this weekend with a rivalry game against No. 2 Wash U. The Bears have been on fire this season and have relied on senior leadership from forward Andrew Sanders and guard Jake Knupp, who have steered them to a 22–2 record, a UAA title, and an NCAA tournament berth. Wash U’s only blemishes this season came via No. 9 Augustana University in December and Mount St. Joseph in November, in a game in which Mount St. Joseph shot 70 percent from the field. Since their last loss, the Bears have rattled off 14 straight wins with their closest call coming at the hands of the Maroons earlier in the year. Chicago is looking for revenge this weekend and hopes that a huge upset may squeeze it into the DIII tournament. When asked about playing Wash U again, fourth-year forward Collin Barthel said, “It seems like every year our games with them come down to the wire. They are a great team, but it would be incredible to get an upset.”

Chicago must do everything that it can to control pace and tempo against the Bears. So far this season, Wash U has averaged over 87 points per game and gone over the 100-point mark four times. Barthel commented on the game plan for stopping Wash U’s vaunted offense, “We have seen them push the ball and be more aggressive than in the past, so transition defense and rebounding will be huge factors to our success on Saturday.”

The Maroons will rely heavily on fourth-years Barthel and guard Jake Fenlon for offense and leadership. Both captains have amassed double-digit point totals in their last five contests, of which the team is 4–1. If the Maroons can upset the Bears on Saturday, Barthel and Fenlon will be at the heart of it.

Aside from being a massive game for Chicago, Saturday’s matchup will be the culmination of four years of persistence for the four senior Maroons: Barthel, Fenlon, forward Ryan Shearmire, and guard Porter Veach. Barthel commented on the bittersweet final game when he said, “Knowing it is the last game for myself, Jake, Ryan, and Porter, we are going to play with a little chip on our shoulder because it is our last chance to leave a legacy as a class and as individuals. As a group, I think we all have grown up and learned a lot over these four years, and a majority of that came from the people we met, the places we went, and things we got to do as a member of the University of Chicago men’s basketball program.”

Barthel finished by saying, “I cannot thank my parents Tim and Julie, my brother Connor, and my little sister Caiti enough for all their support throughout the years. Not only as a basketball player here, but also for their love and support throughout my entire time here at UChicago.”

The Maroons will take on Wash U at the Gerald Ratner Athletics Center on Saturday at 3 p.m.