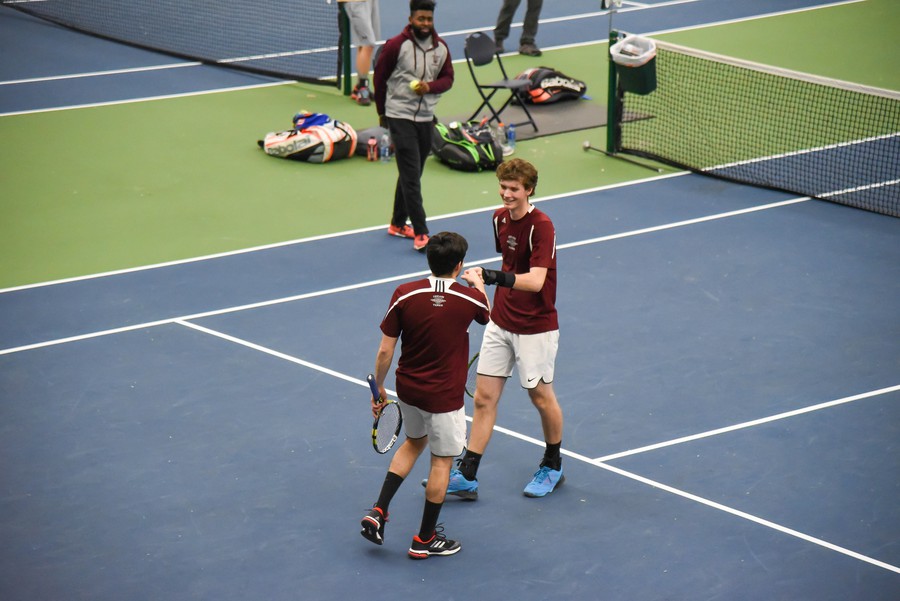 Second-year Erik Kerrigan is congratulated by a teammate.

The men’s tennis team traveled to St. Peter, Minnesota, this past weekend to compete in the ITA DIII National Team Indoor Championship. Competition included No. 1 Emory University, No. 6 Wash U, and No. 10 Carnegie Mellon. The men finished the weekend with two wins and one loss. On Friday, the Maroons beat Carnegie Mellon 6–3, but on Saturday they fell short, losing 5–4 to Emory University. On Sunday, the Maroons were able to redeem themselves, beating conference rival Wash U 5–4.

Although the Maroons are proud of their performance, they are still far from satisfied. Second-year Tyler Raclin commented on his feelings in regards to the weekend.

“We did very well this weekend, coming very close to defeating the defending national champions, Emory University,” he said. “We were definitely excited to capture a win over our conference rivals, Wash U.”

Second-year Erik Kerrigan echoed his teammate’s sentiments. “With this weekend, I think everyone is feeling pretty happy, but still not satisfied. We got third, which was a solid result, but we really wanted to take out Emory in the semis. We almost did, only losing 5–4, so it was a bit of a bittersweet tournament,” he said.

This weekend’s loss to Emory University broke the Maroons’ undefeated record. Their overall record is now 9–1. However, the Maroons are using the loss as ammunition and as an opportunity to learn from their mistakes and improve. Breaking the weekend down and understanding what they did well and what they need to work on will be essential for the Maroons as they move forward.

Kerrigan and second-year Ninan Kumar commented on the team’s strengths and weaknesses this past weekend.

“Moving forward I think we can start a little better instead of getting behind early and having to come back and win in the end,” Kumar said.

Kerrigan added, “I think we did well responding to tough situations as a team, namely by bringing a lot of energy to all of our matches, especially when the other team raised their cheering levels.”

Looking ahead, the Maroons are ready to hone their skills. Improving every day in practice is always a priority for the South Siders.

“To improve, I think it’s just about everyone consistently putting together their best-quality matches and knowing we are in a good place moving forward,” Kerrigan said.

Raclin agreed, saying, “Moving forward we are going to focus on hitting better drop shots to throw off our opponents in the future.”

The Maroons’ goals are clear: to win a national championship. If the squad continues improving and playing the way it has been, the goal is certainly tangible.

“The team’s goal at this point is definitely to win NCAAs this year,” Kerrigan concluded. “I really feel that when we’re locked in together, that’s what we are capable of achieving.”