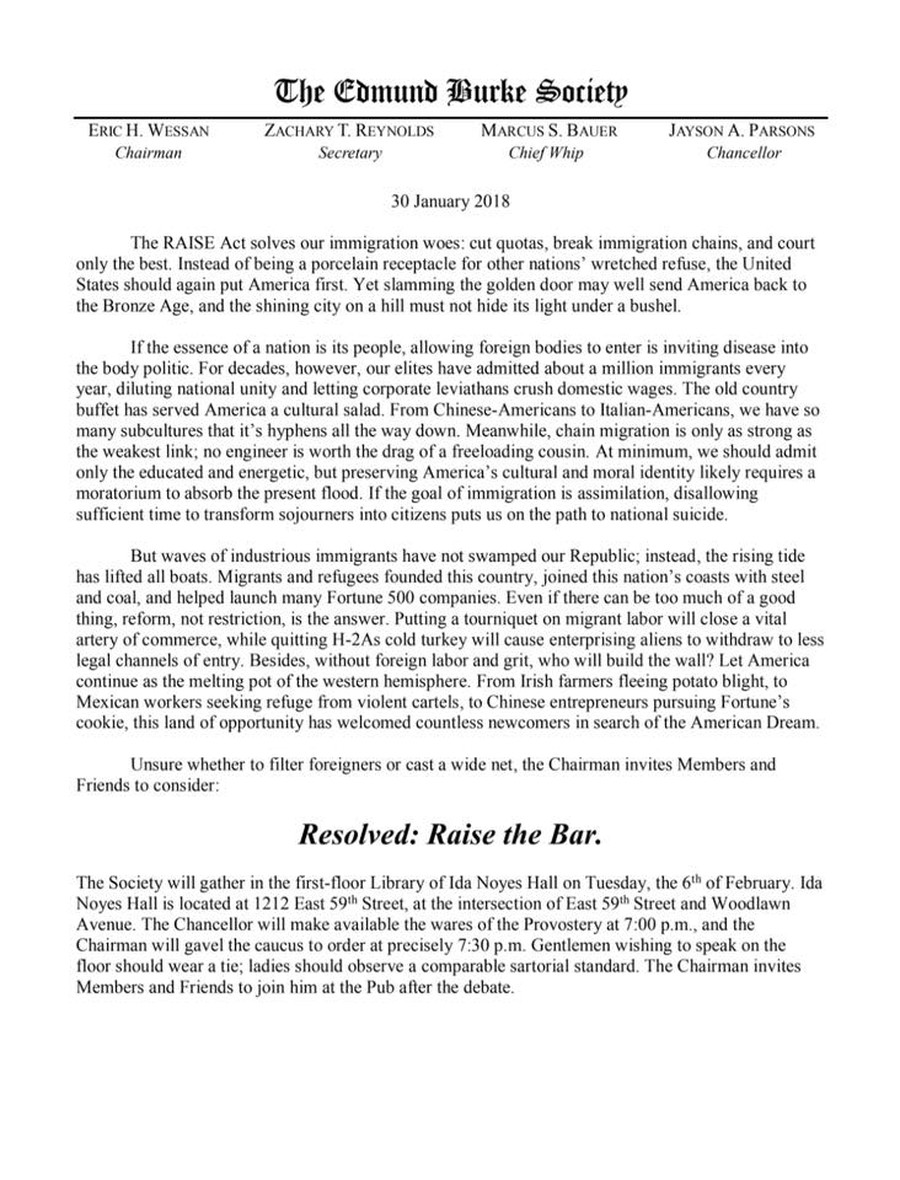 The Law School is airing the newest episode of Should We Encourage Racists to Insult Minority Communities to Satisfy Our Free Speech Fetish? and this time it’s starring the Edmund Burke Society.

For those who don’t know, the Edmund Burke Society is a self-described “conservative debating society,” where conservatives gather to discuss “ideas seriously in an amiable atmosphere.” Most people just know it as the place for racists to convene and mock minority groups with full impunity. The society hosts events every quarter, and their newest so-called debate should give you an idea of where this reputation comes from.

The group was planning to discuss immigrants in a debate that has now been indefinitely postponed, and the original flyer advertising the debate is included with this article. In the flyer, the group refers to immigrants as “wretched refuse” and says that “allowing foreign bodies to enter is inviting disease into the body politic.” They complain about policies that “admit a million immigrants every year, diluting national unity” and in the past, they gleefully referred to Obama as the “Kenyan in-chief.”

These are the pressing issues that some of the sharpest legal minds in our county are engaged in. M. Todd Henderson, a tenured professor at the Law School, is actually validating this event by proudly opening up the discussion. The Law School is often a safe haven for these types of antiquated in-your-face forms of bigotry. A few weeks ago, we gave a platform to a speaker who regularly declares the superiority of “white culture.”

The Burke debate first came to the attention of most law students when a Muslim student emailed the flyer to the Law School listserv. She was rightfully angry that a recognized student organization referred to her family as trash and disease.

Several emails followed in which students declared their personal indignation at the flyer. I sent a message markedly different than the rest. I personally insulted the leadership of the organization in a quid pro quo level of debasement. He called my family trash. I responded in kind. I may have crossed the line, but I refused to honestly engage with individuals who are unwilling to acknowledge the basic humanity of my people.

That’s a line I hardly ever draw. I constantly engage with people I disagree with. In fact, I’ve been criticized for over-engaging and over-indulging. As a Palestinian, I’ve had countless conversations with people who sometimes consider my identity a demographic threat. I’ve given them the benefit of the doubt even when others say they don’t deserve it, because I know most people are genuine. If they espouse hatred, it usually comes from a place of ignorance or fear. That’s why I am willing to discuss damn near any issue.

But the Edmund Burke Society does not deserve this level of respect. That’s what the free speech purists and the respectability police don’t seem to understand: How you frame an issue is arguably more impactful than debating the issue itself. If someone invites me to a debate titled “Are Muslims Terrorists?” this presupposes that it is a valid position to believe that we are.

As a Muslim immigrant, this is not an issue of my personal feelings. Normally, I wouldn’t care how a snotty group of privileged white men pleasure themselves within the confines of their ivory tower. Their racism is a toxic flaw that reflects their personal character, but we don’t live in a vacuum. The issue they are purportedly “debating” is one that has real life consequences, and the framing of their debate is part of the reason bigots like Steve Bannon and Stephen Miller have found refuge in the White House.

Stokely Carmichael once said, “If a white man wants to lynch me, that’s his problem. If he’s got the power to lynch me, that’s my problem. Racism is not a question of attitude; it’s a question of power.” The U.S. government is currently using its power to crackdown on immigrants, emboldened in large part by racist views like the ones espoused by the Edmund Burke Society. That is why I am offended. I am offended that my colleagues, future lawyers, professors, judges, and politicians, find this type of speech acceptable. I am offended that I have been asked to engage with this type of conduct with anything but complete and utter revulsion.

I am writing this in response to the people who expect my community to respectfully engage with these bigots. 99.9 percent of society deserves genuine engagement. My community has taken part and will continue to take part in the civil discourse and exchange of ideas that comes with living in a diverse society, filled with often conflicting but valid viewpoints. The members of the Edmund Burke Society are part of the .1 percent that deserve neither our respect nor our time. And they definitely do not deserve continued funding and validation from the Law School.

Osama Alkhawaja is a student at the law school.