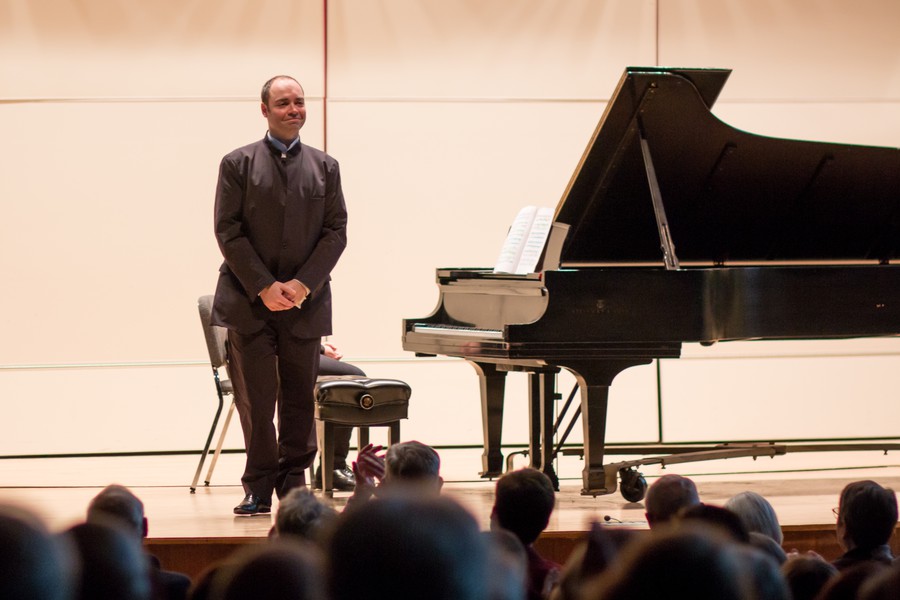 Melnikov is a graduate of the Moscow Conservatory, where he studied with Lev Naumov, nicknamed “Godfather of Russian piano school.” Naumov himself was a student of Heinrich Neuhaus, another pillar of the Russian piano school, giving Melnikov enviable musical lineage. Since first recording this Shostakovich cycle in 2010, it has become a sort of trademark piece. Without denying him the versatility which he has earned and proven with many other great works, it must be recognized that his interpretation of 24 Preludes and Fugues is truly nonpareil.

The structure of Shostakovich’s work—one of prelude-fugue pairs in all 24 keys—is a reference to Bach’s Well-Tempered Clavier, which has been dubbed everything from “the pianist’s daily bread” to “the pianist’s Old Testament” (relative to Beethoven’s 32 Piano Sonatas’ “New Testament”). In the centuries since its completion, the Well-Tempered Clavier has influenced many composers, with Shostakovich’s cycle being one of the greatest, though it is quite rarely performed.

It is easy to play piano (quietly), but very difficult to make that piano sound beautiful. Throughout the evening, Melnikov displayed the versatility of his piano approach, his exquisite tone quality captivating the hall. Throughout 24 Preludes and Fugues, he consistently surprised the listeners with the variety of color that can be achieved while still remaining within the realm of piano; playful as in the G major and A-flat major fugues, melancholic as in the E minor prelude, and somber as in the C minor prelude, to name a few. The passages of continual motion in the A minor prelude and the B-flat major prelude were executed perfectly, but what was truly remarkable in these sections was the tone. Never once did the running notes seem mechanical, nor were they floating (not necessarily a bad effect, but probably inappropriate for this style). Instead, Melnikov found a perfect balance between precision and tenderness.

If a criticism must be made, then it would be an understandable and potentially inevitable one. The structure of a fugue involves contrapuntal (two or more independent voices) works based upon a main subject. This subject is introduced at the beginning of the work and remains interwoven throughout. With three or more voices, at least one of the hands is playing more than one melodic line at any given instance, making it incredibly difficult to bring out a specific voice. At a few points in the 24 Preludes and Fugues, the main lines were perhaps a little harsh. This is, however, the lesser of two evils; had all the voices been played at the same volume, the counterpoint would have been unintelligible.

Melnikov’s approach to piano is truly stunning, and it is likely what sets him apart from other artists. The concert came to a close with the D minor prelude-fugue pair: a tremendous ending whose scope could rival that of orchestral finales. For the first time, Melnikov broke his solemn, nearly rigid posture, and used his frame to produce an even greater sound.

The maestoso climax of the 24th fugue is all the more satisfying when it is preceded by the entirety of Shostakovich’s brilliant cycle. These preludes and fugues are rarely programmed, and it is even less common to hear the entire cycle in concert, not least because of the massive mental and physical stamina that is required to last the nearly three hour-long performance time. In his performance, Melnikov displayed his exceptional technique and profound artistic mastery of Shostakovich’s 24 Preludes and Fugues.