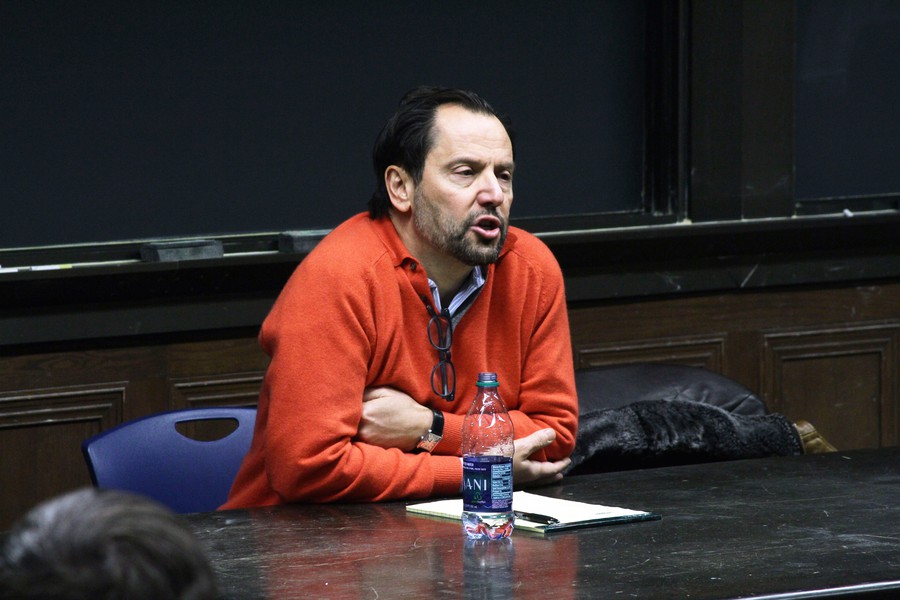 Professor Luigi Zingales, who invited Steve Bannon to a debate on campus, ponders a student question at a town hall in Kent.

Several dozen students attended a town hall with Booth School of Business professor Luigi Zingales on Monday evening to voice their concerns about his decision to invite Steve Bannon to speak on campus.

Students were able to ask the professor questions directly or submit them anonymously to be read aloud by fourth-year Student Government (SG) president Calvin Cottrell. The SG Executive Slate co-hosted and moderated the town hall.

Zingales opened the town hall by stressing his intention of understanding the alt-right movement, rather than legitimizing or promoting Bannon’s controversial viewpoints. “There were two souls in the Trump movement,” Zingales said. “There were the billionaire souls and the populist souls, and Bannon represented the populists.”

He described Bannon as “able to interpret and understand a feature of the American people that we academics missed” and indicated the importance of holding Bannon accountable for “his flirting with racists.”

Zingales referred to his experience growing up in 1970s Italy, during the time of the Red Brigades, a left-wing terrorist group that carried out political murders. “The Red Brigades survived and thrived,” he recounted, “up until the rest of the political spectrum drew a line and said: ‘It’s one thing to be leftist. It’s another thing to shoot [people].’”

The professor also emphasized a difference between extremist beliefs and extremist violence. “There is a line within freedom of speech,” he said. “[A]nd there is a line outside [it]—that is, hate crime and violence. That should not be tolerated.”

Several students at the town hall expressed the belief that Bannon falls on the side of hate speech. One student quoted from a deposition in Bannon’s divorce proceedings, in which his wife claimed he made anti-Semitic remarks.

“I think [these are] exactly the kind of things that I’m collecting to ask him to respond to,” Zingales replied. “He said that we’re not an economy, we’re a people. What I want to know is, who is in this ‘people’? I’m an immigrant with a strong accent, so I probably don’t fit into his definition of ‘people.’”

Zingales also addressed a question on whether he would invite someone like Hitler to speak. “Would I have invited Mao [Zedong], for example, to the University?” he asked rhetorically. “Probably yes. Mao killed more people than Hitler and Stalin together, but I would have a conversation with him, yes.” Zingales referenced an Italian interview in which Hitler made anti-Semitic results before his rise to power. “It would have been helpful if more people had seen early on what Hitler was made of.”

Zingales welcomed student input for the upcoming Bannon event, and asked for suggestions on how to minimize potential counter-protests and violence. He mentioned the possibility of holding an open call for a student to co-moderate the debate with him.

Zingales thanked the protesters for their “respectful behavior” and hopes to schedule talks for later this week.