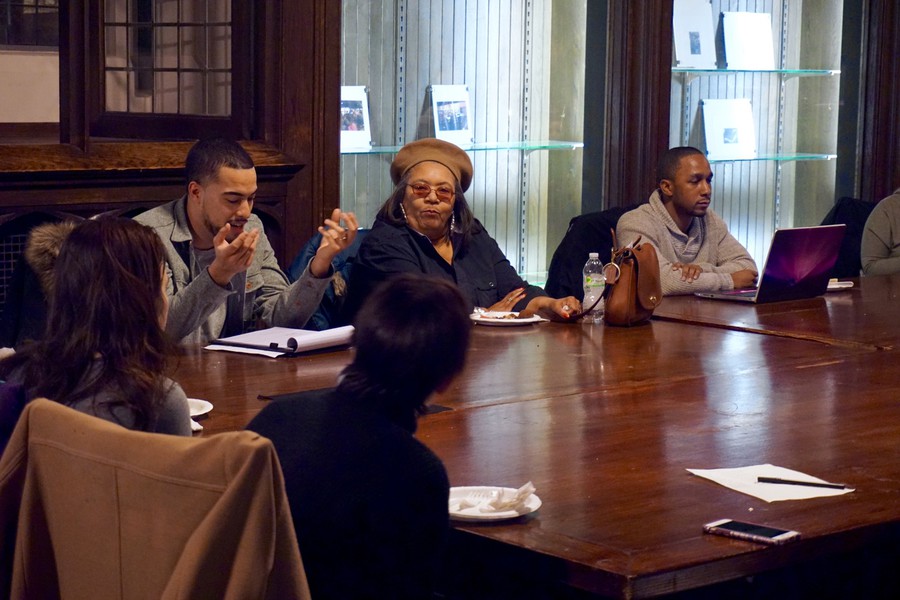 Ryan Jobson, Sharon Payne, and Caine Jordan discuss a community benefits agreement for the Obama Center and reparations from the University of Chicago.

Reparations at UChicago (RAUC) and UChicago for a Community Benefits Agreement hosted a teach-in with guest speakers this past Tuesday.

The speakers drew connections between seeking a community benefits agreement (CBA) for the Obama Presidential Center and demanding reparations from the University for benefiting from slavery.

Ryan Jobson, a Provost’s Postdoctoral Fellow in anthropology, told attendees that both the CBA and reparations should be seen as opportunities to reevaluate the University’s claimed status as a repository of knowledge distinct from the surrounding community. “Even as the University aspires to this project of being hermetically sealed off from the community, it never fully succeeds in doing so,” Jobson said. “Calling attention to those cracks in the foundation of the University is one of the ways that we’re better able to make claims on the University at large.”

Sharon Payne, a Woodlawn resident and one of the speakers, said that there is no reason that the Obama Foundation and its partners in the deal, including the University, should be unwilling to agree in writing to promises they have already made.

Ph.D. student and RAUC member Caine Jordan, one of the invited speakers, said that the group is not outlining its own set platform of reparations for the University but is reaching out to South Side community organizations to develop demands. However, Jordan emphasized that RAUC includes a CBA as one of its priorities for reparations.

RAUC, a group made up of Ph.D. students Jordan and Kai Parker and postdoctoral fellow Guy Emerson Mount, has been central to the push for reparations at UChicago. The group published a paper in May of 2017 which argues that the University of Chicago benefits from the legacy of slavery because Stephen Douglas, who donated the land which enabled the founding of the old University of Chicago, was a direct financial beneficiary of slavery.

The National Coalition of Blacks for Reparations in America (N’COBRA) held a “Rally for Reparations” in front of Levi Hall in November of last year in solidarity with RAUC.

Caine said he envisions reparations at UChicago as a continuous process, as a part of which community members could check that the University is meeting its obligations and would have veto power over University projects involving expansion into the South Side.

According to Caine, “There’s been so much harm done that...I think it’s going to take a long stretch of time for people to feel as though the University has repaired what it has done to the community.”

One attendee asked what CBA campaigners can do to bring the city, the Obama Foundation, and the University to the table. Payne and Jobson emphasized attracting the attention of as many people as possible and changing the narrative around the Center.

Jobson said it’s important to reframe conversation about the Center around its real beneficiaries, citing the list of financial contributors to the Obama Center released last month: “They’re the ones creating the funds necessary for a project like this, they’re the ones benefiting from public lands being transferred to private hands, and they’re the ones that are going to benefit when there’s all sorts of real estate speculation around Woodlawn and the South Side.”

Payne added that two of the best ways to push for a CBA are to threaten city officials with being voted out and to attract attention to the movement. “One of the things I say to go do is vote. The other thing is to get everyone that we can think of involved, and to let them know, ‘This is not exactly as you think it is.’ They have the money, and we have the people.”