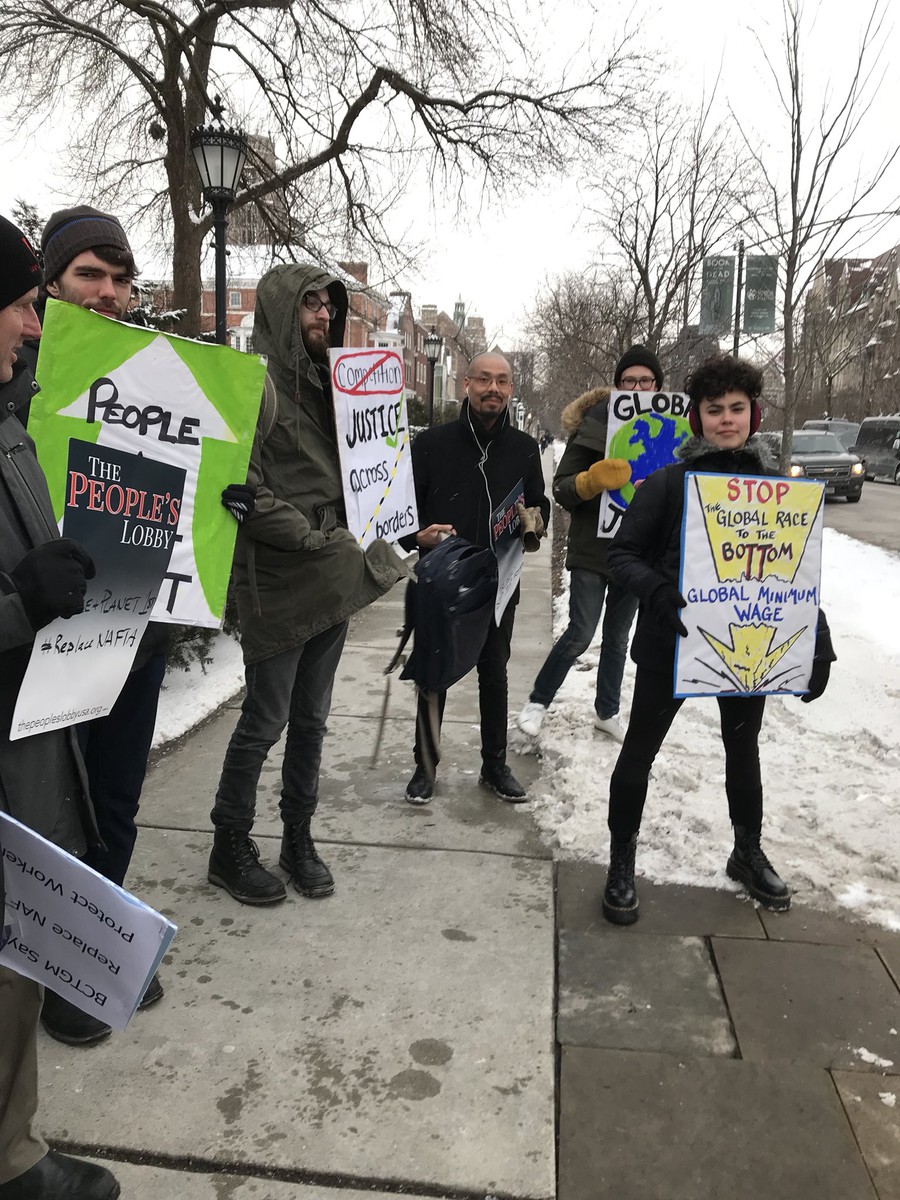 Outside the Justin Trudeau event on Wednesday, UChicago Student Action (UCSA) organized a small rally with a coalition of labor groups and the People’s Lobby, in an effort to hold the Canadian prime minister accountable to his promises on labor and environmental standards.

Fourth-year UCSA representative Anna Wood told The Maroon that while the organization strongly supports Trudeau’s nominal support for workers’ rights across the continent, especially his calling for a ban on so-called “Right to Work” laws in the U.S., his announcement at Davos of a new Pacific trade deal was a step in the wrong direction.

During the event, fourth-year UCSA organizer Alex Peltz tweeted that “cops and administrators” had asked him to leave Mandel Hall for distributing fliers criticizing Trudeau.

It appears in Peltz's video, posted alongside the tweet, that the authorities instruct him to distribute the material outside the building. One individual can be heard explaining that the problem was not with the content of Peltz's fliers, but rather his location inside Mandel Hall. "If you were passing out pictures of Care Bears, I would have to say the same thing," she said.

Marielle Sainvilus, Director of Public Affairs for the University, said that the Peltz was prohibited from passing out fliers in Reynolds because of the high security around the head of state.

"UCPD and the Deans-on-Call, working closely with Canadian law enforcement and the Chicago Police Department, established that any protesters could use public areas immediately outside the Reynolds Club," Sainvilus said. "They were informed that distribution of any fliers inside the building was not permitted during this high-security event; they could either cease that activity and stay in the building, or distribute fliers immediately outside the building. After several requests, the protesters left without incident."

After the event, Peltz told The Maroon he views the encounter as an example of the University’s “stunning hypocrisy” on the issue of free speech.

“The University only defends free speech that doesn’t impact their bottom line,” he said. “It makes me really, really angry that this bastion of open discourse would physically remove and threaten me for sharing a non-offensive and fully informational leaflet because that might be ‘an issue’ or ‘make people uncomfortable’ or ‘cause a scene.’”

Wood also described the incident as a display of University hypocrisy, especially in light of the recent controversy surrounding Steve Bannon’s invitation to campus.

“Ironically, the University is violating the free speech rights of its own students at the very same time it's using the banner of free speech to give cover to Professor Zingales and Steve Bannon,” she said.

“To make things worse, the issues that Alex was trying to speak about are an essential part of the response we need to counter Bannon's toxic nationalist politics. One of Bannon's main ideas is that white workers in the US need to be protected from poorer workers from other countries through border walls and protectionism. Strong international labor standards would end the global economic system that is responsible for making workers so poor in the first place, and this would make render nationalistic demagogues like Bannon irrelevant.”

Graduate Students United member Claudio Gonzales also told The Maroon that the University’s decision to shut down Peltz makes him skeptical of their claim to be a bastion of free expression.

“Guardians of free speech do not shut down democracy and debate when it is expedient,” he said.