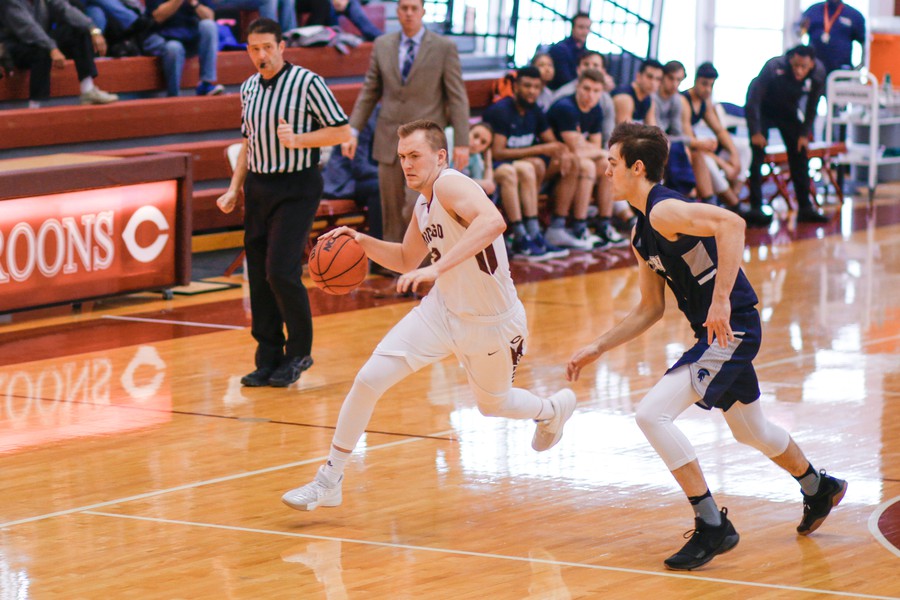 Collin Barthel towers over students and teammates on and off the court, but a humble, goal-oriented baller stands within his massive frame. Barthel, who is 6’8”,  had numerous Division I looks in both basketball and football, but a career-driven path led him to the University of Chicago.

To begin, Collin touched on the close-knit nature of the basketball team by saying, “When I came to the University, I immediately felt welcomed. Everyone on the team had tremendous relationships, even from my first year onward.” Then, Barthel highlighted the merits of his UChicago experience: how athletics at the University helped him grow as a person, and how his education acted as a springboard into the career of his choosing. “I hope when people look back on my four years here, they see that we competed, competed on the court and in the classroom. Competition brings about adversity, and that is a big reason why you play sports—to overcome adversity. I hope that people see that one can utilize athletics to grow as an athlete but also a person. Division III athletics is unique in that fact that everyone balances their future professional life and their sport. That balance, I believe, only strengthens the person that you grow into when you graduate.”

Barthel’s words resounded with a common thread of humble gratitude. The UChicago men’s basketball team may not have been as successful on the court as he would have liked in his four years, but the journey and relationships he formed will last a lifetime. Barthel touched on his career as a whole by saying, “Looking back, our main goal of winning a UAA title and making the DIII playoffs never came to fruition, but it wasn’t about the end result, rather about the process and the enjoyment of it all. I hope that the guys on the team see what it takes to be successful ,and going forward, I hope that they put it all together and be the best team that they can be. I had an amazing time at the University and I hope people saw how drastically a role can change throughout a career. When I came in as a first-year, I was mainly a hustle player and rebounder, but during my senior year, I transformed into a scorer, and I had confidence in my own ability and the team did as well.” Senior leadership carried the Maroons down the home stretch of the season with both Barthel and co-captain Jake Fenlon pouring in over 30 points on different occasions as the season came to a close. Barthel finished the last four games of his college career with point tallies of 14, 13, 26, and 16. Barthel commented on the scoring outburst from himself and his fellow co-captain, “It’s something special, not forced. Jake and I became two guys that the team could lean on. It was awesome as seniors to know that we were playing our best basketball to close out our careers.”

Barthel was able to finish his Chicago career with an amazing upset this past weekend against rival No. 2 Wash U, certainly a memorable way to go out. Barthel said that looking back at the “ups and downs of this year, we knew that we had one more chance to end on a high note. We knew that we probably were not going to make the post-season, but we had the chance to spoil Wash U’s perfect conference season. We clawed our way back and eventually pulled out a victory against the No. 2 in the country. That will be a game that I will remember forever.”

Finally, Barthel hopes that he and the fourth-year class have left their legacy, not just on the court, but off of it as well. “I want us four to be known not just for what we have accomplished on the court. I want people to know how important an education at the University of Chicago means to us. I hope people see that hard work in all aspects of life pays off and that you can ultimately attain you career goal through athletics.”

Barthel will continue his career as a sales and trading analyst for BNP Paribas in New York.