"Thoroughbreds" is a Thrilling Comedy With a Killer Twist 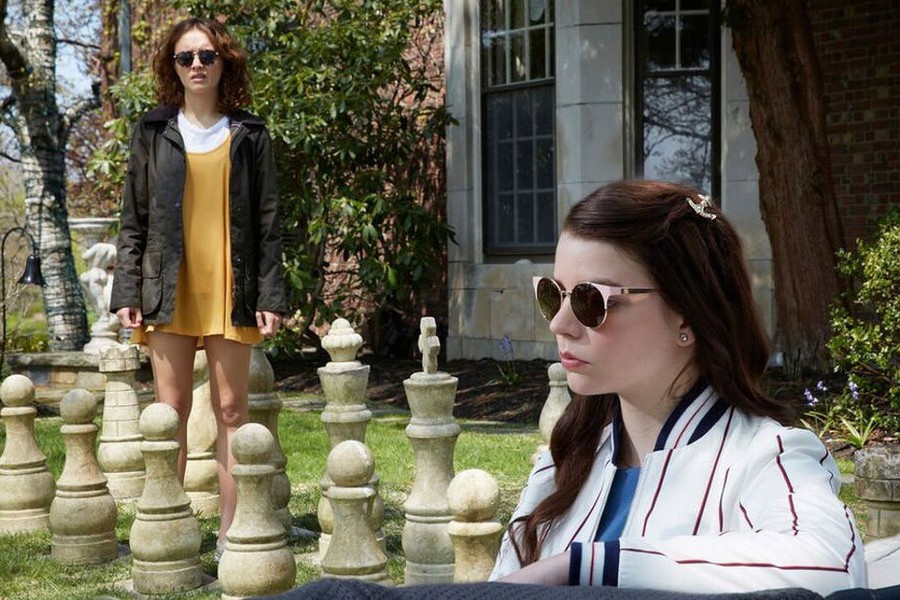 There are films are that you enjoy, and then there are films that glue you to your seat. Corey Finley’s Thoroughbreds is the latter. Protagonists, Lily (Anya Taylor-Joy) and Amanda (Olivia Cooke), are best friends and residents of a wealthy Connecticut suburb. The sociopathic Amanda convinces Lily to murder Mark, her asinine, self-important stepfather, and together they enlist the help of local boarding school dropout and drug dealer Tim (the late Anton Yelchin) to be their hitman. A psychological thriller with a tiny and incredibly talented cast, an enticing premise, and a tear-jerker twist, Thoroughbreds did not dazzle with CGI effects, star power, or decadent set design. Rather, it impressed with its whip-smart dialogue, dark humor, and sheer intensity.

The film opens with Amanda, an unassuming, if a bit bored, teenage girl, waiting for Lily in the foyer of her plush house. Amanda catches her own reflection in the mirror, expression never wavering from her signature blank stare. She smiles for a split second—taking on a friendly, but ingenuine, expression—then just as suddenly switches it off. The fleeting moment is disconcerting and catches viewers off guard. Cooke’s unnerving ability to seamlessly move from emotionless deadpan to charming schoolgirl is heightened by the film’s dark score.

On paper, a sociopath known for killing a horse sounds scary, yet strangely enough, Amanda orchestrates some of the funniest scenes of the film. In one, Lily and Amanda are watching an old film, in which the heroine is sobbing hysterically. Amanda explains that it is easy to fake real tears. In an uncharacteristic display of emotion, she begins to sob, her eyes well up, and sure enough, tears flow. Then all of a sudden, it’s gone. She turns to Lily, her face blank- “See? The technique.” It’s an impressive feat of acting. Cooke is at times eerily sociopathic, and at other times a hilarious, bored genius. Her character, as a result, is a true anti-hero. Despite her dark tendencies and lack of empathy, moments like these show that she is trying to relate to others. Her dry humor in the crying scene, delivered completely deadpan as ever, increases her likeability. Improbably, one can’t help but root for her.

Although the best friends propel the narrative, it’s Tim who steals the show. He is first introduced at a house party where he is outside causing a scene, pathetically arguing with the teenage boys who presumably host the party and want to kick him out.

“I am providing you all with early drug experiences that you will forever cherish,” he indignantly explains. It’s hilarious and sad. In this scene, he is a composed rebel without a cause. But later, when Amanda and Lily visit him at the kitchen of the old folks home where he works, he is pathetic, frightened by the girls’ sinister plans. Yelchin’s ability to portray Tim with both swagger and fragility is mesmerizing. He is not scary because he’s a big, menacing mafioso, but rather because he’s a live wire. With such a small cast, balance is everything: Amanda and Lily’s scenes work well because their characters are opposites (Amanda feels nothing, while Lily feels everything), and Tim adds a new dynamic by being neither the calculated, neutral Amanda, nor the emotional, unsure Lily, but rather an outsider disturbed by the girls’ plan, but vulnerable enough to be swept up in it all. He cuts the tension of the film with his chaotic lack of reserve.

These are just the standout performances, but all six of the cast members are airtight. Lily is poised but too self-interested, Mark is a hilarious, rude narcissist, Lily and Amanda’s mothers are both at times concerned, at times too distant. But where would good actors be without a brilliant screenplay? Here, too, Thoroughbreds delivers—the premise is intriguing, but the trailers don’t quite capture how well the film fulfills its promise. At first, it appears that Lily is being manipulated into killing Mark by sociopathic Amanda. However, the film reaches a turning point when Mark tells Lily that she is selfish and needs a dose of reality. She is infuriated. But he is not wrong. Finley’s strength as a screenwriter is his ability to make us realize, all of sudden, that something was really there all along. In this moment, one realizes that yes, Lily is a little selfish. Similarly, once it is revealed that Amanda recently killed a horse, one remembers that her bedroom was covered in horse-riding trophies. The film seems to have a familiar premise, but there are several twists like this that make the viewer rethink everything they saw. This, combined with Gilmore-girls speed dialogue (though not quite so wholesome), creates a story that never feels expected.

In this day and age, a film lacking flashy visuals and celebrity cameos is a risk. Yet Thoroughbreds takes that risk, and is deliciously refreshing. Its original plot, stellar cast, and low budget production are all a departure from Hollywood’s signature glossy, multi-million dollar films. Even Lily’s big house, decadent, but not glamorous, gives the feeling that wealth is isolating—the house has so much space, and so few people with which to share it. Finley has done what many fail to do with triple the resources. Perhaps, like Amanda did to her aging horse, we must mercy-kill all these remakes and reboots, in favor of more originals like Thoroughbreds.