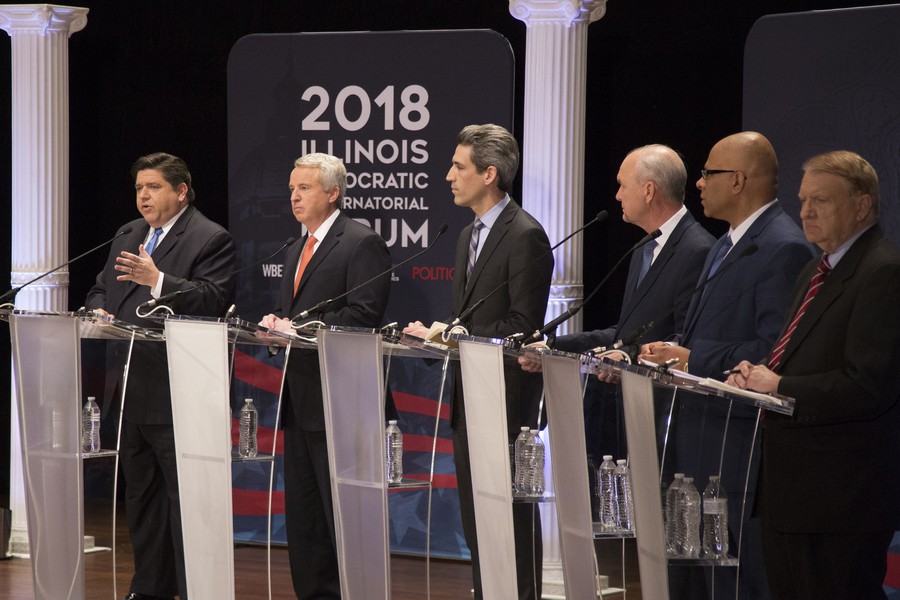 By Cindy Yao   and Daksh Chauhan

Frontrunner Illinois Democratic gubernatorial candidates J.B. Pritzker, Daniel Biss, and Chris Kennedy clashed over jobs, taxes, and the Blagojevich tapes in a forum hosted by the Institute of Politics, Politico, and WBEZ Chicago on Thursday.

Pritzker, a billionaire heir from the family that owns the Hyatt hotel chain, is running on the platform of reforming early education and the health care system. Biss, a former UChicago math professor, shares similar views but leans more left and wants to address the tax system.

According to a new poll by the Paul Simon Public Policy Institute, Pritzker currently leads Biss by 10 points—31 percent to 21 percent.

The candidates first shared their diverging views on job creation and the tax system. Pritzker focused on increasing jobs added by small businesses, which he mentioned make up two-thirds of Illinois’s jobs.

Biss didn’t lay out the specifics of his plan for creating jobs, but said he wants to lower the unemployment rate from 5 percent to 4 percent during his term, and emphasized that the jobs need to reach all groups. “Unemployment rate for the Latino community is 50 percent worse and we need to make sure that everybody benefits from new programs,” he argued.

Kennedy said he wants to adopt Massachusetts’s job model, which focuses on universities producing more jobs through research. Pritzker attacked Kennedy for his proposal, citing Kennedy’s previous actions as Chair of the Board of Trustees at the University of Illinois, which resulted in increased tuition and forced many students to seek education out of state.

Regarding the tax plan, all the candidates except Marshall said that they supported a progressive income tax.

Pritzker was asked to comment on his wiretapped conversation with former Illinois governor Rod Blagojevich, in which he made racially insensitive comments about African-American politicians.

In response, Pritzker admitted his wrongdoing and took responsibility for his actions, affirming his belief that voters will look past political attacks.

Kennedy fired back, accusing Pritzker of using the “language of racists [in the tapes]...not the language of leaders.”

When asked about whether they would request Speaker of the House Michael Madigan, who faced at least nine accusations of sexual misconduct within the past five years, to step down, Daiber was the only candidate to reject the proposal.

In light of the Trump administration’s efforts to curb federal aid, both Biss and Kennedy rejected Secretary of Education Betsy DeVos’s work and her constant efforts to lower student aid.

Biss proposed spending more on the Monetary Aid Program (MAP) grants in the state to fill the void that DeVos is creating by lowering federal aid.

Pritzker, on the other hand, said he firmly believed that the state can negotiate in areas like federal aid. “States fought the federal government when it came to saving Obamacare, and we can fight it to save student aid programs too,” Pritzker said.

In an interview with reporters after the debate, the candidates largely criticized their opponents’ views and past actions, but also voiced their other plans if they are elected. Pritzker promised to unite Illinois residents and to get them more involved in the state’s affairs.

“Many ventures like 1871 [a digital startup incubator that Pritzker helped found], which helped build Chicago’s digital startup community, came from getting people’s ideas together, and as a governor I will get people from all walks together and build upon their ideas,” Pritzker said during the conference.

At the end of the forum, all candidates except for Marshall pledged to support whichever candidate becomes the democratic nominee.

On Friday evening, protestors gathered outside the Logan center before the Democratic gubernatorial debate.

Biss: Electing Pritzker is “literally the worst thing we could possibly do”

All You Need to Know About the Illinois Primaries