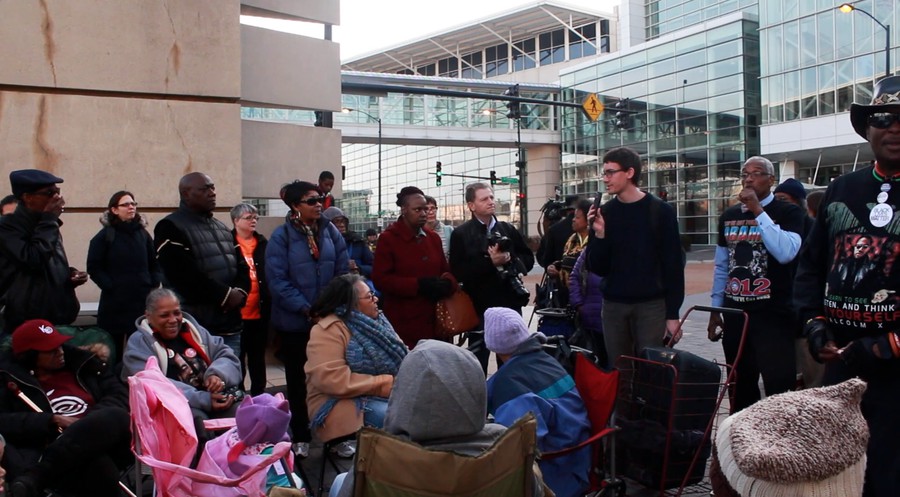 Former President Barack Obama made a surprise appearance and gave the main presentation for the Obama Foundation’s public meeting on Tuesday at McCormick Place.

The meeting addressed the organization’s progress, concerns from the community, and aspirations for the Obama Presidential Center (OPC).

During his speech, Obama defended the foundation for refusing to engage with and support the coalition seeking a Community Benefits Agreement (CBA). The proposed CBA would embrace a range of development measures and has gained traction among thousands of local residents in Bronzeville, South Shore, Woodlawn, Washington Park, and other neighborhoods.

Just two hours before the meeting, the Obama Library South Side CBA Coalition held a prayer vigil against displacement outside the McCormick Center, where members called on the Obama Foundation to sign a CBA safeguarding community interests.

Charles Perry, member of Westside Health Authority, spoke at the vigil and described his disillusionment with Obama. “[Obama] didn’t know us in 2008,” he said, and prayer vigil attendees joined in, “when we voted for him!”

“He didn’t know us in 2012 when it was a struggle to get back in the White House…. Back then we had his back,” he said. “Well in 2018, he don’t even want to look at our backs…. He’s moving forward with the University of Chicago and the mayor of Chicago. All those people are the ones calling the shots.”

Obama justified not signing a CBA by pointing to the Foundation’s ongoing commitment to transparency: It has met with community leaders, taken into account every input from local residents, and made changes to the OPC through a “deliberate, thoughtful, and inclusive” process.

The Foundation pledges to execute this “transparency process” throughout the project. Obama quoted former Mayor Harold Washington, “‘We are going to be fairer than fair’…in how we approach the design of this presidential center.”

The former president noted that it is the nature of a project of this size for everyone to not completely agree on every single aspect.

He went on to explain that with more economic activity, there will be more demand for all kinds of amenities in the community. The Obama Foundation estimates it will create $3 billion worth of economic activity, 5,000 jobs in construction, and over 2,500 permanent jobs.

It expects to welcome over 700,000 visitors each year in the museum portion of the center. (The Museum of Science and Industry, the nearest attraction to the OPC, received 1.4 million guests in 2014.)

Obama promised to work with organizations and institutions to preserve affordable housing and ensure local residents gain maximum benefits. “You can’t have one without the other. You can't say we want more jobs, more businesses, more opportunities for our kids, but otherwise we want everything to stay exactly the same,” Obama said.

He spoke about how he attributes his career in public service, marriage to Michelle, and two-term presidency to the South Side of Chicago. He hopes that the Center will transform the South Side by creating more jobs, business opportunities, educational impact, and economic growth.

The former president explained that he chose the OPC site because he hopes it will foster the next generation of leadership like the South Side did for him. He is certain the OPC will be a “jewel” of not only the South Side, but also the city of Chicago.

The organization has recently filed a plan development application to request the proper zoning and approvals for the proposed OPC site. Concurrently, the Obama Foundation is participating in the Section 106 review process.

Section 106 is part of the National Historic Preservation Act of 1966 which evaluates proposed changes to historic sites such as Jackson Park. The Obama Foundation expects to meet with the Chicago Plan Commission and City Council this upcoming spring.

The Department of Transportation held a session for proposed changes and improvements in road infrastructure, pedestrian walkways, and traffic.

The Chicago Park District announced in its session that the OPC signed an agreement to fund the construction of a new artificial turf field which will serve to replace the existing field at the OPC site. Negotiations over the golf course and other recreational fields are still in the works.

This was the eighth Obama Foundation public meeting involving the OPC.

Lakeside Alliance, a collective of minority-owned firms, has been chosen to manage the construction of the Center.