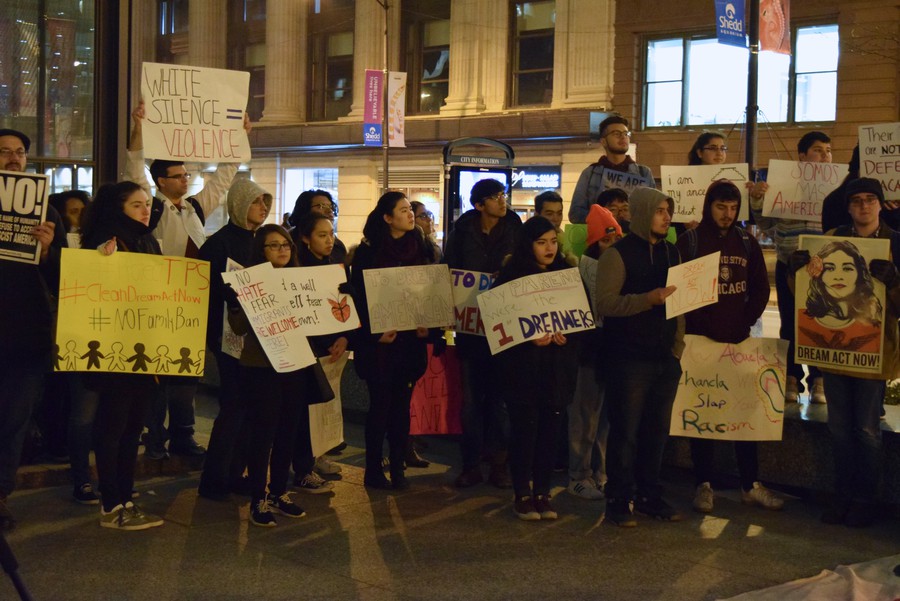 With only five days until DACA’s expiration date (as set by the Trump administration), protesters led by UChicago second-year Mo Cruz and first-year Emilio Balderas repeated chants demanding Illinois representatives Michael Bost, Rodney Davis, and Peter Roskam confront the choice to either “stand as freedom fighters” or “allow Trump’s regime of terror to continue to thrive.”

Implemented by former president Barack Obama in 2012, DACA offers protection for qualified immigrants who illegally entered the United States during childhood. DACA is often discussed alongside the proposed DREAM Act, a bill first introduced in 2001 and has been debated often since, which would establish a path to permanent residency for immigrants who currently qualify for protection under DACA. President Donald Trump announced his intent to rescind DACA on September 7 of last year.

The repeal of DACA would render nearly 800,000 immigrant youth at risk of deportation.

“The goal is to get lawmakers to understand that we need immediate legislative protection for immigrant youth, but that this legislation cannot throw immigrant groups under the bus by increasing funding to the ICE, constructing a border wall, or sponsoring detention centers that are harming the immigrant community,” Balderas told The Maroon. “We’re here to get protection, but also to make sure that all affected communities aren’t indirectly harmed by that.”

Accompanied by a chorus of “undocumented, unafraid, delays mean deportation” chants, Cruz and Balderas unfurled a banner that read: “Our lives are in danger, protect the undocumented youth #HereToStay.”

Speaking from her experience as an undocumented immigrant, South Side resident and elementary school teacher Katherine Huete Galeano shared her opinion on the recent Supreme Court refusal to take up DACA as a key case dealing. The high court said that the case should first be heard by an appeals court, meaning that DACA will remain in place if or until the Supreme Court agrees to hear the case officially.

“Although that was very good news for us, we need a policy where we can renew DACA,” she said. “In the future, it’s still their decision, which is why we need the passage of an actual bill to secure the policy from elimination.”

Alternating between chants in Spanish and English, Cruz emphasized a message of inclusivity throughout his speeches, calling upon the “undocumented and unafraid” to the “trans, queer, and unashamed” members of his audience.

“I’m going to keep fighting until my community is protected,” Cruz said. “Our work does not end when the DREAM Act passes. Our work ends when every undocumented immigrant in this country can live knowing that they’re not going to be separated from their families. None of us are free until all of us are free.”