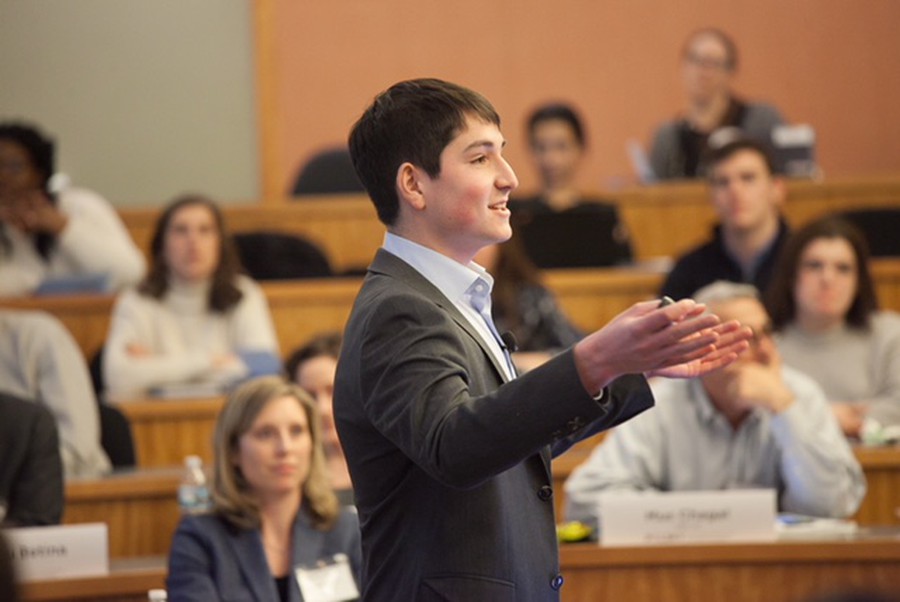 A student speaks at the College New Venture Challenge (CNVC)

The Polsky Center hosted the finals of its sixth College New Venture Challenge (CNVC) on Wednesday, March 7, at the Booth School of Business.

Quevos, a startup producing high-protein, low-carb egg white chips, took home $15,000, the largest portion of the allotted $30,000. The other half of the money was split between the other four presenters, Debate it Forward, Pavan, Athena Ultraviolet, and PeerBoost.

Debate It Forward, a nonprofit aiming to bring debate to lower-income or differently abled students, presented first. The company’s leaders, fourth-year Leah Shapiro and third-year Joshua Aaronson, emphasized the hub-and-spoke model of their business, which uses college students (currently from UChicago) to teach the basic skills involved in debate to elementary schoolers across a range of socioeconomic backgrounds.

Shapiro emphasized that no matter what the outcome of CNVC was, Debate it Forward was moving ahead with other grants along with the sale of their curriculum to certain California schools as a scaling prototype.

“[CNVC] was a great experience. The coaches were just phenomenal,” she said. Debate it Forward received a check for $10,000, the second largest sum presented.

PeerBoost leaders JP Neenan and Yasoob Rasheed presented their firm as a peer-to-peer marketing company that aims to connect college student recommenders with firms wanting to promote their products. Their motto: “How valuable are personal connections? Very valuable!”

“And we couldn’t be more grateful to all the judges that helped us; they’re absolutely incredible. Their advice is just priceless,” Rasheed added.

Ted Engels came to CNVC to represent Athena Ultraviolet, which produces UV-LED devices for hospital sink drains. The UV light helps kill bacteria buildup in the drains, which can easily transfer to hospital patients and cause “healthcare associated infections.” Deaths from these infections constitute 5–10 percent of hospital deaths, said Engels.

“Bacteria…are deadlier than they have ever been in history,” he said. “What’s the cost of these infections per person? It’s the cost of a new Mercedes-Benz, or a year’s salary for someone on housekeeping staff.”

However, judges were skeptical of Athena Ultraviolet’s ability to impact the healthcare industry, which prefers large-scale changes over small reductions. One judge, who said he had seen 25 startups countering hospital-acquired infections over five years, said he had only invested in one of them.

They are planning to roll out their full program in Delhi this summer, which includes an air quality forecast, information on air pollution, and the opportunity to create a personalized profile on the app, adjusted for health issues and familial circumstances.

“Our long term goal is to start an environmental revolution,” they said.

Pavan received $3,000. Datta and Raju are excited about the future of their company.

“We’ve just really built out our team and we’re starting to build out our platform and our interviewing, so it’s a lot more concrete now that it was a couple months ago, so now we feel that no matter the outcome of CNVC, we have a lot of traction,” Datta said.

The winning startup, Quevos, promised to carve out a good initial market in fitness enthusiasts and dieters before moving into a more general market of healthy snackers and mobile eaters.

Using Halo Top ice cream as an example, founders Nick Hamburger, Chonghyun Ahn, Ben Elias, David West, and Zack Schreier showed how in order to win in the packaged food market, they needed to make a product that tasted similar to the competitors, but with drastically better nutrition numbers. Quevos chips have 20 grams of protein for every two grams of carbohydrates.

Unlike with the previous presenters, judges’ questions mostly centered around further development and pitches for improving the product.

“These are not potato chips. They’re not comparable,” one judge said. “This is absolutely going to sell like crazy in the athletic market. How much product development do you need to do to get it to cross into the mainstream?”

Another judge suggested that Quevos change its packaging to a more organic look to reflect the chips’ natural composition, while another posited the idea of calling them “thins” to avoid placing them in comparison to potato chips.

The most ringing endorsement?

“I would rather put this in my kids’ lunchboxes,” one judge said.