CBA Coalition Protests Rent Increase, Hairston Warns It Not To “Deceive the Public”

The Coalition claimed at the protest that the proposed Center in Jackson Park has incentivized property owners to increase rents. The groups demanded that the city pass a CBA ordinance to protect residents from displacement.

They first protested outside 20th Ward Alderman Willie Cochran’s office, where Cochran did not make an appearance. They then rode to Fifth Ward Alderman Leslie Hairston’s ward meeting, where Hairston denied their claims that the Center is causing rent increases and refused to support a CBA ordinance.

“[The protestors] cannot try to deceive the public,” Hairston told The Maroon in an interview, stating that there are tenants who live alone in two-bedroom apartments but have not paid the full price of a two-bedroom.

“If you’re one person, you gotta be in a one-bedroom; if you’re in a two-bedroom, you gotta pay the difference. There were some people that didn’t want to do that. They wanted to mix it with the Obama Library stuff.”

The Coalition, an alliance of South Side community groups, has long asked the Obama Foundation, the University of Chicago, and the City of Chicago to sign a CBA, a legally binding agreement that would require those developers to provide amenities such as guaranteed employment and housing to local residents. However, the developers have refused to do so. Michael Strautmanis, the Foundation’s vice president of civic engagement, previously told The Maroon that the Foundation believes a CBA is not inclusive enough of local community members. 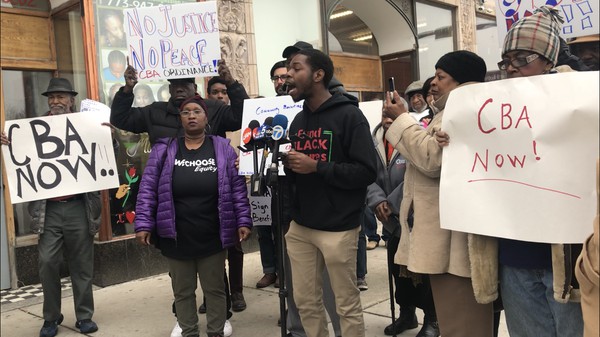 Parrish Brown, an activist with the CBA Coalition, urges aldermen to pass a CBA ordinance outside Alderman Cochran's office

Outside Cochran’s office, the Coalition demanded that the city pass a CBA ordinance that would potentially bind the city to agreements about employment, housing, and education, and urged Cochran and Hairston to introduce the ordinance in City Council.

“We have a right to not be displaced out of our communities, and it’s unreasonable for black people to not get the permanent and construction jobs when the Obama library comes,” Parrish Brown, an activist with the CBA Coalition, said at the protest.

Alex Goldenberg, an organizer from Southside Together Organizing for Power, stated that tenants living in Jackson Park Terrace, an apartment building across the Center, are facing rent increases of between $100 and $300 that will go into effect April 1. He said that although the building’s tenants do receive housing vouchers from the Chicago Housing Authority (CHA), “the voucher program does not protect them against this rent increase.”

One tenant is “literally buying boxes and planning to move because her rent is going up over $250,” he said.

According to Goldenberg, Leon Finney, a well-known reverend and community leader, owns the apartment building and is “trying to profit from the attractiveness of the Obama Center.” Deed records show that the University of Chicago originally owned the building but leased it in the early 1970s for long-term affordable housing efforts. Jackson Parkside Partners LP, a for-profit organization run by Finney, has held the lease since 2003.

In the past, the city has labeled Finney as a scofflaw landlord, after the nonprofit that he founded, the Woodlawn Community Development Corporation, amassed code violations for the buildings that it managed. The Maroon has reached out to organizations that Finney leads, but could not reach Finney for comment.

At Hairston’s monthly ward meeting, which the CBA coalition has interrupted before, one protestor directly asked Hairston to pass a CBA ordinance. After Hairston denied the request, the protestors collectively left.

In response to Hairston’s claim that tenants are experiencing rising rents because they have not paid the full price of their apartments, Goldenberg said that while one tenant does indeed live by herself in a two-bedroom, the tenant has always lived in the apartment by herself and is only now experiencing a rent increase. He added that there are tenants living in one-bedroom apartments who are also experiencing rent increases.

Hairston additionally told The Maroon that rents in the Jackson Park Terrace apartments are also rising because the building is being “refinanced.” Goldenberg responded that it is possible that “the CHA is giving out less to business owners because of periodic redistribution, but the owners [Finney] are passing all increases onto tenants.”

Hairston said that she is open to collaborating with the Coalition: “I’m into rent control, I’m into neighborhood stabilization. I’d be happy to work with them on that.”

When asked whether she would support any form of a CBA, Hairston replied, “I was elected to represent the people, and I am representing the people. There are still some things that you all have not seen yet that are coming…. Stay tuned.”

Gabriel Piemonte, who will be running for Fifth Ward Alderman against Hairston, has expressed support for Jackson Park Terrace tenants on Twitter in the past few days. Piemonte previously told the Maroon Editorial Board in a meeting that Hairston’s refusal to endorse a CBA has disillusioned him of Hairston’s commitment to local residents.

According to Brown, the CBA Coalition plans to demand a CBA ordinance at the next Chicago Plan Commission meeting on April 19, in which Commission members will vote on zoning changes requested by the Obama Foundation to build the Center.

By Matthew Lee and Elaine Chen

Some community stakeholders, such as the University, are concerned the ordinance in its current state might disincentivize investment.