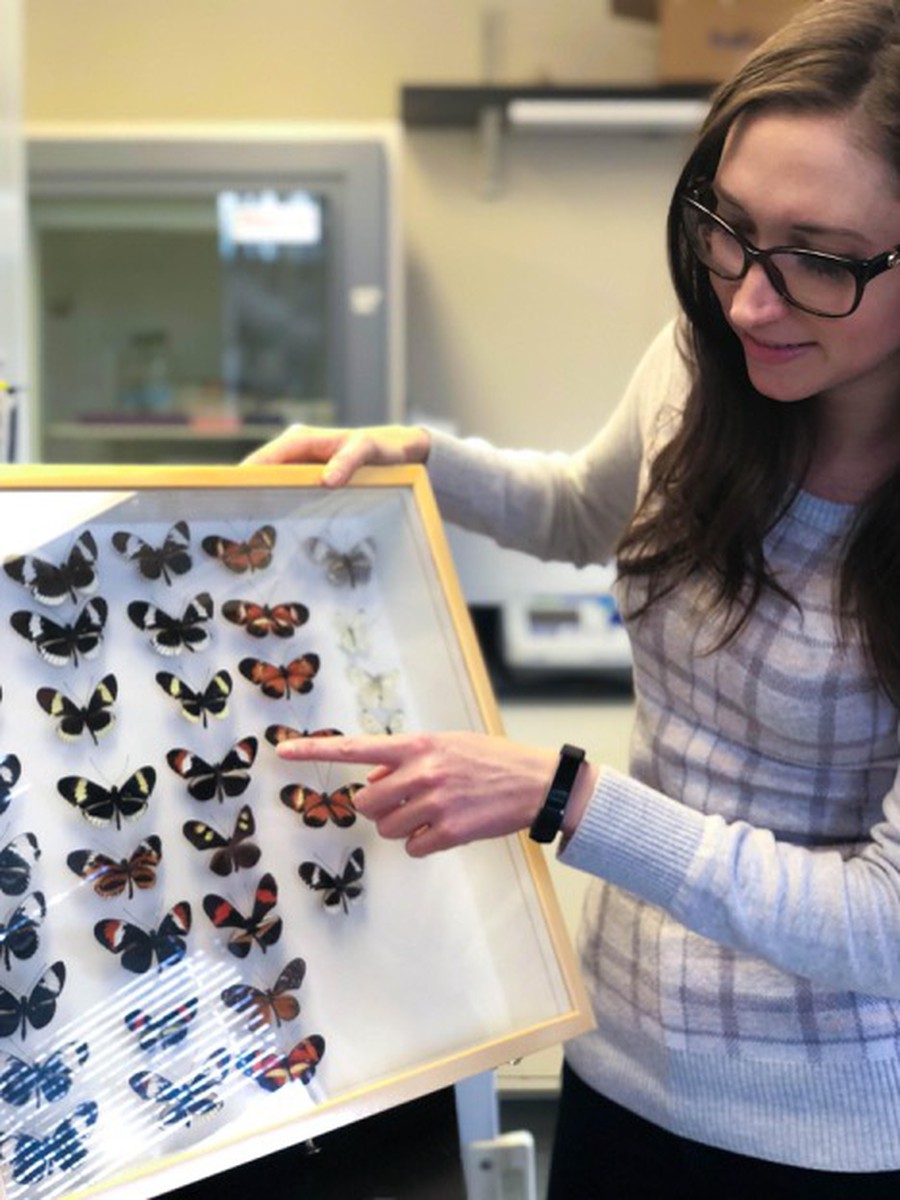 Although a scientist at her core, Dr. Susan Finkbeiner has been raising heads due to her rather uncommon side job: professional model. Always fascinated by bugs and entomology even from a young age, Finkbeiner took up modeling after earning a doctorate in evolutionary biology and ecology at the University of California, Irvine. In between working at Boston University and traveling to Central and South America for research, Finkbeiner met with a Massachusetts-based modeling agency that started sending her to fashion shows. She told Fox News that, although the two are an unlikely combination of interests, there are things to be learned from field work which can be applied to the runway; the balance needed to traverse streams and rivers on research trips has prepared her for strutting down runways in high heels, and mathematical equations have helped her perfect her runway walk.

In the wake of being recognized by the Chicago Tribune, Finkbeiner has been inundated by the press. The Maroon visited her at the Kronforst Lab at the University of Chicago’s Department of Ecology & Evolution, which predominantly uses butterflies to study the evolution and genetics of adaptation and speciation. In the interests of the scant time she has available between research, modeling, and media requests, this interview was conducted via e-mail.

Chicago Maroon: How did you come to study butterflies? Was it a subject you had predetermined in your mind as something you wanted to study as an undergraduate?

Susan Finkbeiner: My bachelor’s degree is in entomology (Cornell University), and my Ph.D. is in Ecology and Evolutionary Biology (University of California, Irvine). For as long as I can remember—since I was maybe 3 or 4 years old—I’ve been incredibly fascinated by insects, especially butterflies. I had known ever since then that I wanted to become an entomologist, so yes, it was something predetermined in my mind that I wanted to study as an undergraduate.

CM: If I’m correct, your work has found that “frequency dependence shapes the adaptive landscape of imperfect Batesian mimicry.” Your research suggests that as one phenotype becomes more and more common so as to outnumber that of the poisonous species it’s mimicking, then predators begin to recognize this change in populations, leading to predation of the now dominant phenotype that before had been protected from Batesian mimicry, mimicry in which an edible animal is protected by its resemblance to a noxious one that is avoided by predators. What have you found through your recent studies, and do you see these findings as applicable to ecological systems outside of butterflies?

In the project that you mentioned (soon to be published, I have the revisions due Friday for the journal!) I was working with two species of butterflies from the genus Adelpha, where you have a toxic model and a non-toxic mimic. The two species are equally abundant in a Costa Rican field site that I work in, but in my Ecuador field site the toxic species is significantly more abundant and the non-toxic mimic is somewhat rare. In Ecuador, both species avoid predation, but in Costa Rica, the non-toxic species is learned by predators and attacked significantly more than the toxic species. This is one of the first field studies thoroughly testing the importance of frequency dependence in wild populations of butterflies, using two distinct geographic locations whose model and mimic frequencies vary. These findings are certainly applicable to systems outside of butterflies, they can be useful for information on any animal or plant mimicry system, and provide insight into the importance of predator perception of prey phenotypes.

I wish I had some Adelpha to show you in the lab today, instead I showed Heliconius, which are Müllerian mimics, where all butterflies sharing that phenotype are poisonous, rather than mimics being tasty. 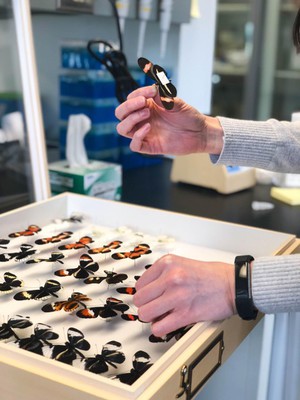 CM: Where do you see this research leading in future studies? What is your next project?

SF: In the future I hope to continue examining what underlies the perfect butterfly mimic, I have some preliminary data on the importance for wing shape and mimicry in butterflies and I would like to expand on that. I also would like to see how mimicry effectiveness varies between understory and canopy-flying butterflies, because the predator community is different, but testing that is not an immediate priority.

Some of the current work I am doing in the Kronforst Research Lab involves using mimetic Adelpha butterflies to examine molecular rates of evolution via RNA sequencing. The Adelpha genus spans from northern parts of the U.S. all the way down to Uruguay, and they follow this pattern of having more species in the tropics versus temperate areas, with species richness peaking near the equator. There are still mysteries behind why animals are so much more diverse in the tropics, and working with Adelpha butterflies at both the molecular level and ecological level in the field, will help us better understand what drives speciation and evolution in animals in different climates and habitats.

CM: You’ve said that your life is a like a “crazy Cinderella story” (or more like a Hannah Montana story for us late ’90s kids), how do you balance both worlds? Do you ever feel being a scientist is limiting your goals as a model or vice versa?

SF: The way I balance “both worlds” of science and modeling is that I try to keep modeling obligations scheduled far in advance, and on weekends if possible. I see modeling as more of a hobby than a job, and keep science my priority. Planning ahead of time for fashion shows and photo shoots helps me keep my schedule in check with my research and field work, but sometimes modeling jobs are last-minute and that can get tricky with timing. I don’t think that being a scientist limits my modeling goals or vice versa, but no matter how productive I am over the course of a week or month, I wish there was more time to dedicate to both!

CM: Switching between professions that are seldom seen as complementary fields, do you notice a difference in how people treat you or communicate with you if they know you only as a model or only as a scientist?

SF: When I meet people, I tell them I am a scientist. I don’t usually bring up the fact that I am a model and let it be a surprise later on. I know there are underlying stereotypes in both the science and modeling [industries], but I think being a part of either field will give you a tremendous amount of respect. I don’t feel that I am treated differently whether I am known as one or the other, but sometimes people act intimidated by me when they find out I have a Ph.D. in a STEM field, which is a shame. When I am working as a model, and my colleagues in the modeling industry learn I am also a research scientist, they usually get excited about it and want to know more, and vice versa.

SF: Occasionally I’ve come across issues with these stereotypes. That’s part of the reason I want to share my story—I want to show that female scientists can be intelligent and nerdy but you know what, we can also get our hair and makeup done, wear high heels, and walk on a runway during Fashion Week.

Growing up I was teased quite a bit for my love of insects, I always had a butterfly net with me and jars full of bugs. I was told “girls aren’t supposed to like bugs, bugs are gross,” but I ignored what my peers said and kept my sights on becoming an entomologist. It has come to my attention that little boys and girls who like bugs are still being teased this way, and I can be a role model for them and show that, whether you are a boy or a girl, bugs are awesome and anyone can study them.

On the contrary, I like to crush stereotypes in the modeling industry as well. Many people might associate models with being less intelligent than the average person, but in reality we are highly-educated, well-rounded people who have hobbies and love adventure too.

I don’t think it is difficult to explain to my scientific colleagues why I like modeling. Most scientists I know have a handful of other hobbies, whether it be a sport they play, being in a band, creating art, teaching a dance class, etc. For me modeling is just one of those hobbies that helps me relax and unwind from the stresses of research, and it is a world I can escape to. And, I haven’t encountered anyone in the modeling industry yet that doesn’t understand why I like science, usually it’s pretty well-received and if anything they want to know more about my research, which makes me happy! It also makes me stand out from the crowd in a good way.

CM: While I imagine you have simply been following your passions, so many people are amazed to hear your story. How does it feel to be “discovered?”

SF: Hearing the term “discovered” makes me laugh a little because my life revolves around discovering things! Since the Chicago Tribune published their article on me last week, I’ve been bombarded with requests for media interviews, appearances, etc., and it has been slightly overwhelming but in a really great way. Several years ago I got a lot of recognition for a scientific discovery I made with my research, so I have some experience with the media like doing radio interviews and being featured in the news and such. But this is a new kind of limelight for me. I am happy that I am able to draw attention to entomology and evolutionary biology in this “unique” way, and if my story can inspire just one little girl or boy to want to be a scientist, then my job is done. We live on a deteriorating planet and need to recruit all the future scientists we can get!