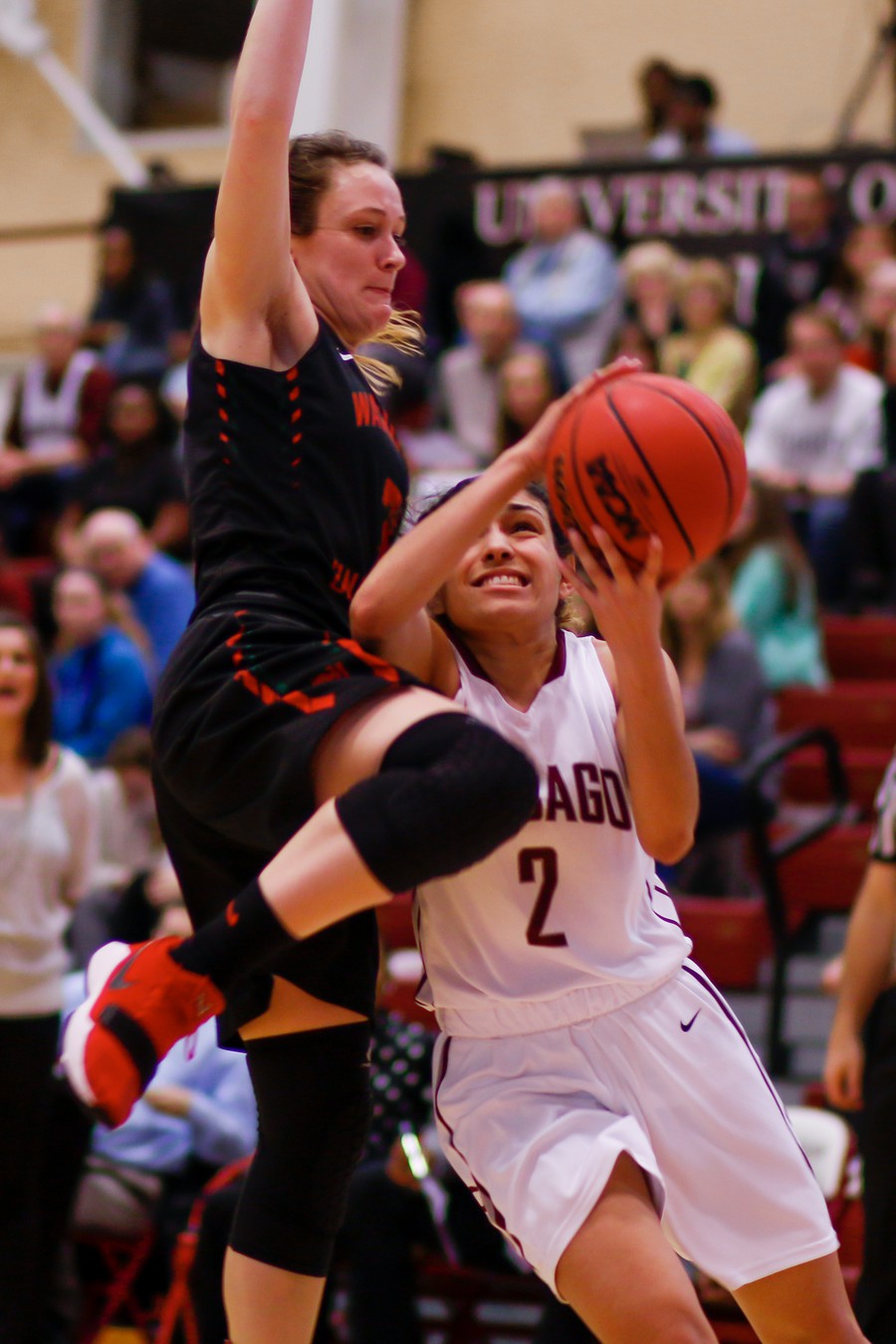 Second-year Mia Farrell gets physical as she goes up for a lay-up against Wash U.

After a tremendous regular season, the sky was the limit for the University of Chicago women’s basketball team as they entered the NCAA DIII tournament. Each game was decided by their determination and unified effort as they consistently left everything on the court. In the second round of the tournament, however, the Maroons were unable to complete a monumental fourth quarter comeback, bringing their record-breaking season to an end.

Although three minutes passed before the first points were scored, the Maroons struck first before their offensive onslaught, when third-year Olariche Obi made a layup. UChicago continued to build momentum after going on a 7–0 run, with second-year Mia Farrell also contributing to the scoreboard. By halftime, UChicago led by 13 points with a 34–21 lead.

The Maroons broke out in the third quarter when they outscored the Warriors 22–9. Three straight layups made by Burt, Lake, and Obi, followed by a three-pointer from Farrell helped to pull the lead comfortable away from Wisconsin Lutheran’s grasp. Burt helped close out the game with an impressive four-point play. As eight minutes remained in the fourth quarter, the Maroons already led by 30 points. The bench came in and contributed another 16 points, and the Maroons combined to force the Warriors to commit 24 turnovers.

UChicago’s second-round matchup against the University of St. Thomas did not disappoint as two of the top ranked teams in the country squared off. While the Maroons were down 14 points at the half, they were not deterred. The Maroons charged back, led by Farrell’s 19 points in the final two quarters. Obi also captured her 15th double-double of the season with 11 points and 15 rebounds.

Going into the fourth, the Tommies’ lead had been cut down to 10 points. Crucial three-pointers by Lake helped cut the deficit to five, and Obi supported by being aggressive with rebounds and eventually scoring to further cut the lead. Although the Maroons took a 58–57 lead, decisive shots made from downtown and at the free-throw line gave the Tommies the final advantage. In the end, it was not enough and the Maroons lost 68–62.

When asked about the team’s identity this season, fourth-year Elizabeth Nye said, “Going into the beginning of the year, you don’t really know who you are going to be, and I think with this team, we didn’t have an idea. We made a goal going into Christmas to be 9–2. At that point, we were 4–2, and we didn’t lose from then on until now.  I’ve never been more proud to be a part of a group of girls that care so much about each other. I think that’s what made this group so special.”

The Maroons finished the season with 24–3 record, including 14–0 in the UAA and an incredible 22-game winning streak.