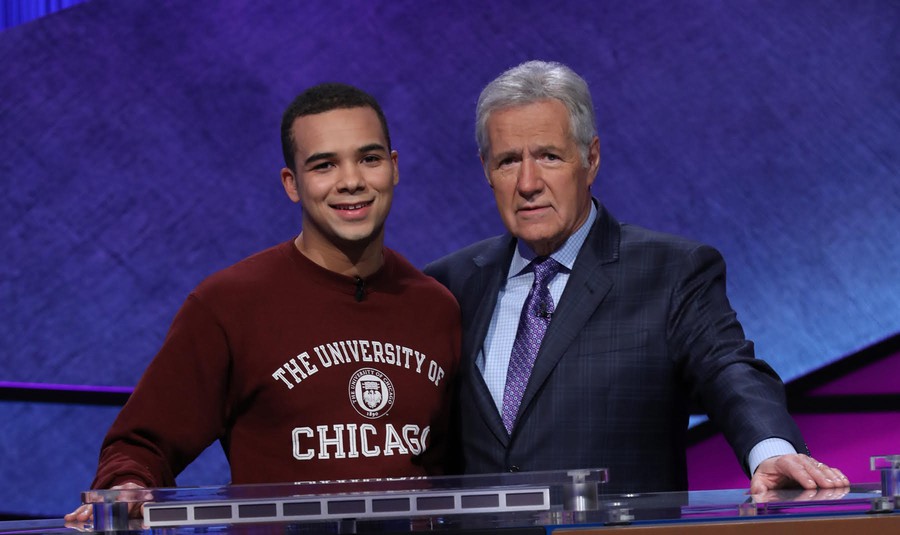 Chicago Maroon: Can you tell me about how one goes about being on Jeopardy!? How does the audition process work?

HK: It was a super happy coincidence. Basically, one of my friends in my fraternity is an avid Jeopardy! watcher and has applied every year. One night in the fall, on a whim, he said “The application came out, let’s just take the test.” It’s an online test with 50 questions. Something like 15,000 people take it and then [around] 5,000 people out of the original 15,000 actually qualify. And then they randomly select 250 people to go to auditions, and so I was selected to go to an audition in a hotel in downtown Chicago. You take another test, you do an interview, and then you play Jeopardy!. From that, 15 people get through that round to the quarterfinals, which is in LA. They fly you out for [that], and then you compete over two days, and then they air it. So that’s the very weird, lucky story of me getting on Jeopardy!.

CM: What was your reaction when you got the call that you were going to be on Jeopardy!?

HK: Oh, I was just like totally surprised! I was pretty sure I hadn’t done that well in the audition, but I guess it just came together. But yeah, it’s really cool. Mainly I just laughed, because it was just one of those things that’s just so unlikely that you would get it and then it’s just such a cool thing to do. I think it was more funny than anything else.

CM: Growing up, did you ever watch Jeopardy!?

HK: I’ve never been a huge Jeopardy! fan, oddly enough. I definitely watched it from time to time, [and] I always thought it was really cool, but it was my friend suggesting that we all do it that prompted me to. Obviously, once I got it, I became the biggest Jeopardy! fan and watched probably hundreds of episodes. In my free time, I watched new ones that came out. If you caught me in my room, there was a good chance that I was watching old reruns of Jeopardy!. So yeah, it definitely made up for some lost time.

CM: Did you watch those Jeopardy! episodes to prepare?

HK: Yeah, absolutely. There’s no good way to prepare for Jeopardy!. But I think what I sort of did was...I ended up watching a ton of Jeopardy!, and started seeing general themes—there are certain categories that would come up all the time, stuff about U.S. history and presidents, and then there’s also a ton of literature that you know is going to come up. It’s like American literature, contemporary English literature, 18th- and 19th-century literature, and then art history’s a big one that you get to learn about. [That’s] actually one of the coolest things, I thought. Because you don’t really know that much about it at first, but once you start to delve into it, it’s really cool and these people have really interesting stories.

CM: What would your dream Jeopardy! category be? The one you’d do the best in?

HK: Without giving too much away, my dream category is Broadway. I’m a huge Broadway fan, but the buzzer is just really, really hard. But yeah, I mean, I love Broadway, I know so much about it, seen a bunch of shows so that would be ideal. Anything U.S. presidents, I’m very into. Very unfortunately, I was quoted that I’m also very good at capitals. I thought of that in a broader context, like, I know world capitals, but I get how it comes across. I do know that the capital of Maine is Augusta, so there you go.

CM: Can you tell me a little more about the buzzer and what's behind the scenes of Jeopardy! that viewers at home might not realize goes on?

HK: I think a lot of people when they watch Jeopardy!—and certainly for me, when I was studying—think that whoever knows most is going to win. But it really comes down to, I feel like, at least in my game, and the games that I saw, most people know most of the answers. The real limiting factor is just the buzzer. Alex [Trebek, the host of Jeopardy!] reads a question, and then right when he finishes saying the last syllable, there’s a guy who determines whether or not Alex is done, and then he unlocks the buzzers. So if you buzz in before that, then you get locked out and you can’t buzz in for another quarter of a second, which seems short, but is like an eternity in buzzer time. And if you buzz in too late, then obviously someone’s buzzed in before you. So nailing that timing right after Alex is done is just a very hard thing to do. And it’s frustrating too, especially when you know the answer, but you just can’t buzz in. I think the biggest thing that people don't realize is that the buzzer is literally the entire game.

HK: It was cool—I mean you see him so much when you watch Jeopardy! that when you actually meet him, it’s just so bizarre. It kind of seems like you’re looking at a wax figure, and you’re like, “Wow, that’s Alex Trebek. So it was like totally bizarre and didn’t feel real, and while you’re doing it, it just comes across as not real.

CM: Did you talk to him about anything interesting?

HK: As soon as you get on Jeopardy!, you’re emailed a packet of stuff that they want to know about you. You have to send in five fun facts and five things you’ve done. And then [on air], Alex has a card with all of this information, he picks whatever he thinks is the most interesting. So you’re sort of caught flat-footed because you don’t know what he’s going to ask you about. The [filming of the] show had been postponed because Alex had some health issues, so by the time that I got onto the show, it had been two or three months since I’d submitted these, so then he asked me a question about something that I’d done my freshman year that I’d submitted and totally forgotten I’d submitted. And so he definitely had an interesting conversation about that, as you will see.

CM: Can you talk a little bit about how the episodes were filmed? So I know that Jeopardy! films multiple episodes in one day, and...

HK: I’m on the Thursday game, which means that I was the fourth out of five to be filmed on that first day. They kept us all in this backroom being babysat by one of the producers. We watched Easy A, we watched The Princess Bride, and I think I had started Iron Man 2 [and] so we’re just all these college students sitting back there playing UNO and watching video games, and they brought us lunch and juice boxes. Then when you’re out there, you’d be alarmed by how much actually goes into it. A lot of times a contestant’s buzzer will break, or Alex might mess up reading a question, or any of numerous things can go wrong, and then they’ll stop and they will refilm it. The other thing that no one gets to see is that when we go on commercial break, Alex talks to the crowd. He’s just a very funny guy, loves to riff with them, make jokes.

CM: So while you were up there, did you bond with any of the other contestants? What was sort of the general camaraderie like?

HK: Yeah, absolutely, we definitely became pretty good friends, because we were just back there in that room for so long, and we’re all staying in the same hotel, so at night we all went out or all hung out. Now we have a big GroupMe, and we talk about it every day. It’s a very small world [and] we all go to similar schools, so we all have friends in common. It was a really weird way to make friends, but [I] definitely came out of that with some good friends and we’re all still in touch.

CM: Where were the episodes filmed?

HK: We stayed at Universal City at the Hilton there, which is a really cool, big hotel, and it was also great because we were all on the same couple of floors, so we all could really hang out. We got there on Saturday and we had Sunday off, just to relax and study and do whatever we wanted to do, so you’re walking through the hotel and you're seeing other kids, and you’re like “Is that kid on Jeopardy!?,” kind of sizing up the competition. Then we went to the studios in Culver City, and it’s pretty cool. There were movie sets all around, we actually got to see the Wheel of Fortune set, which is in the studio right next to Jeopardy!… which I think go up after the episode. So yeah, that was pretty cool, just like getting an idea of what a real studio looks like.

CM: Are there any past Jeopardy! contestants you look up to?

HK: I’m a huge Austin Rogers fan, I think he’s hilarious. He was one of the more public figures to be on Jeopardy!, because he had a really funny presence and answered questions really funny, and Twitter was always trending with him. He did really well, went to the Challenge [Tournament] of Champions, and then came in second last year. Actually, on another cool note, since I’ve been on it, I’ve been added to the Jeopardy! contestants Facebook group. Are you in it?

HK: Yeah, and it’s pretty cool, like every now and then, [six-time Jeopardy! champion and Tournament of Champions participant] Lisa Schlitt posted in it like yesterday, or two days ago, you’re seeing like all these big, famous, Jeopardy! people, and you’re just in a Facebook group with them all of a sudden, you know, like, friending me, like, it’s like definitely pretty interesting and pretty cool.

Note: This article has been lightly edited for clarity.

A lifelong fan plays Jeopardy! against 14 other college students for $100,000.