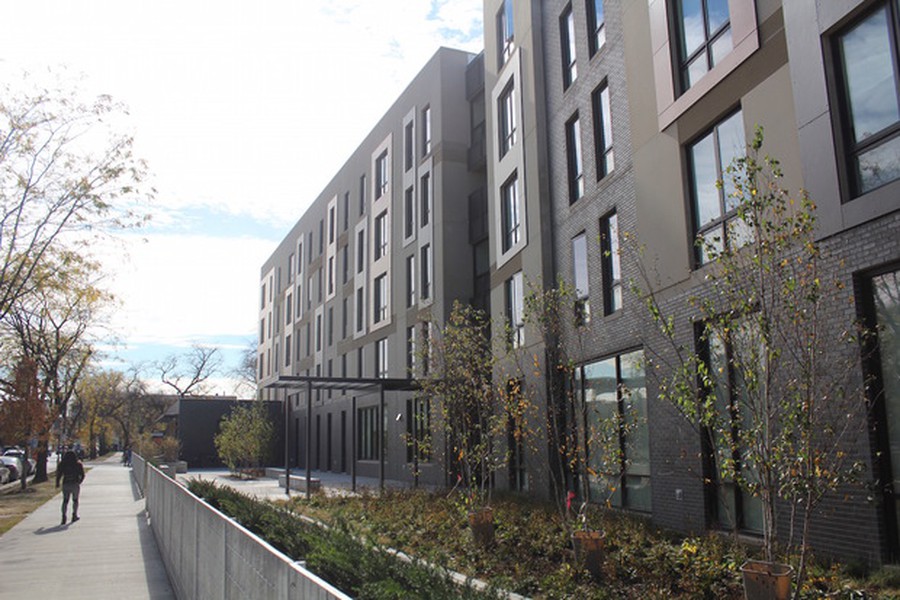 The Burnam apartments, one of POAH's flagship developments in Woodlawn, at 6134 S. Cottage Grove Ave.

Preservation of Affordable Housing (POAH) has been a key player driving growth in mixed-income housing throughout Woodlawn. POAH first began investing in Woodlawn in 2008, when the economic crisis and local disinvestment in South Side communities accelerated a trend of urban flight from historically black middle-class communities.

The Maroon sat down with Bill Eager, POAH’s vice president for Chicago, to discuss affordable housing development, the effects of the Obama Presidential Center on surrounding communities, and the unique challenges of competing for development grants in Chicago.

Eager led POAH’s spending of a $30.5 million Choice Neighborhoods Initiative grant from the U.S. Department of Housing and Urban Development (HUD), which went toward a major redevelopment of Grove Parc Plaza at 61st just south of East 60th Street along Cottage Grove Avenue.

The Obama Library South Side Community Benefits Agreement (CBA) Coalition has reported and protested rent hikes for tenants living near the planned Obama Presidential Center location, while Fifth Ward Alderman Leslie A. Hairston has denied that the center is causing rents to increase.

In our interview, Eager was reluctant to weigh in on the CBA Coalition, calling himself “agnostic,” and said he doesn’t know, from limited data at POAH properties, whether reported rent hikes have been widespread across Woodlawn.

Chicago Maroon: Have you seen rent hikes in Woodlawn? The Maroon has reported on CBA coalition protests of rent increases around planned Obama Center zones, but Hairston has insisted the Obama Center isn’t causing rents to go up.

Bill Eager: I don’t have anything more than anecdotal evidence on rent. Rent’s going up—I can tell you from our own work that our own rent studies that we’ve done over the last several years do show higher rents and, surprise surprise, higher rents in East Woodlawn than in West Woodlawn. The closer you get to the University and the farther northeast you get in Woodlawn, the higher the rents are.

That’s not terribly surprising, given its proximity to the University, and that’s nothing new with the Obama Center. It existed before the Obama Center was even announced. Have they gone up since the announcement? I can’t say, beyond normal inflation, and I haven’t seen any evidence of a one way or the other.

CM: Could you discuss protests that have happened recently? Hairston has said that rent hikes aren’t due to the Obama Center, while CBA insists residents are being pushed out by people like Leon Finney, and that the Woodlawn Community Development Corporation has developed a lot of ostensibly affordable housing that might be taking advantage of development interests surrounding the Obama Center. Could you speak to either side of the debate?

BE: In government assisted housing—and there are many different ways for governments to assist in the creation of affordable housing—there are typically limits in rent. There are either maximum rents that you can charge, based on however they're funded, or if there’s a Section 8 voucher, there’s generally a cap on that. In each case, there are provisions for getting those rents increased. Note: Section 8 refers to the federal Housing Choice Vouchers Program, which provides housing to Americans living in poverty.

Within properties that have rent restrictions, but no Section 8, there are provisions built in for what the maximum rents can be, based on a whole formula. So, is it possible that certain buildings are charging rents that are well below what the market could bear? Sure.

CM: So, what are potential causes of those rent increases?

CM: Let’s discuss the broader context of your work—how did POAH first get involved in Woodlawn?

BE: POAH came into Woodlawn in roughly 2008 to take over the ownership of what was known as Grove Parc Plaza Apartments, a Section 8 property that stretched roughly from 60th to 63rd Street along Cottage Grove. It occupied most of those three blocks, and it was in very poor shape. It looked like the mortgage would be foreclosed, and people who lived there would be displaced, through no fault of their own, but because the conditions in the buildings had gotten so poor that there was a sense that it was beyond repair.

POAH took over the property under the following conditions: The Section 8 contract would be preserved, the housing would not be shut down, but over time, POAH would redevelop that property, so in phases demolish it, because it was considered obsolete, and replace what was in all Section 8 property with more of a mixed income community, which we now call Woodlawn Park. Everybody who was a resident at Grove Parc Plaza who wanted to stay in Woodlawn would get a new home in Woodlawn, whether it’s new construction or a newly rehabbed apartment. All of the Section 8 units would be preserved—not the physical unit themselves, but there was a contract with HUD for 504 Section 8 apartments.

Now that we’re several years down the road, we’re beginning to do some more commercial work, including the Jewel-Osco we opened recently. We opened a building at 61st and Cottage that is going to have a new day-care center. We’re almost done with the building at 63rd and Cottage that will have first-floor retail.

CM: In 2017, POAH released a report stating that Woodlawn has room for a lot more development without being at risk for gentrification. Why is it that certain communities can withstand millions in investment without displacement, while in other areas rapid commercial investment can push out longtime community members?

We saw an opportunity on Cottage Grove, one of the key arteries in Woodlawn, to [develop] something that’s newer, cleaner, friendlier, more architecturally pleasing, provides better housing for the people who lived there. We thought doing that, we could leverage that into kind of a broader community revival.

We see Woodlawn as a really good opportunity to do community revitalization without displacement.

Gentrification’s a word that gets tossed around a lot. I think a lot of people would define it differently. I’m not exactly sure how I define it, or how much is too much, but I think I think one of the things we’re trying to focus—like some other folks in the community, such as the 1Woodlawn folks—and because gentrification is such an ambiguous word—is displacement.

I think Woodlawn has an opportunity to be really a national model because there’s a lot of room to grow in Woodlawn before demand for land and buildings gets so intense that people are driven out in any significant way.

CM: To what extent will the Obama Center drive gentrification or community displacement?

Well, I think the fact that the Obama Center coming to Woodlawn is a terrific thing for the community. I think Woodlawn has been a terribly overlooked community in many ways, and I hope that the library allows, heck, the rest of Chicago to see Woodlawn for what it is.

What effect is it going to have? I don’t have a crystal ball and I don’t think anybody really knows what the economic impact of it is going to be. I would imagine that right around the Obama Center, there will certainly be some impact. I don’t know exactly what it’s going to be.

I think not just as a community, but as a city, we need to do the Obama Center right so that number one, people who live nearby, can compete for whatever jobs are generated, both at the center and in whatever the surrounding amenities turn out to be.

CM: Do you have a stance on the CBA?

BE: I do not. I’m officially agnostic.

CM: Is that just your official stance, as a member of POAH?

BE: Well, I’m very of two minds. As a company we’re not commenting, and personally I have very mixed feelings on it.  We have a long-standing MOU [memorandum of understanding] with the Grove Parc Tenants’ Association, but that’s a very narrowly focused agreement between two parties centered on one piece of work, as opposed to a community-wide thing. So, I would like to think that the sides can come to an understanding, because it presents a great opportunity to drive some positive change in the community.

I also think we want to be sure that the center is designed and oriented so that when people enter and leave the Obama presidential experience, they're not turning their backs on the community. It would be a terrible thing for thousands of people to visit the Obama Presidential Center and then just jump back on Lakeshore Drive and leave. We don’t want big investments like this to be done with their back to the community.

CM: Where do you see commercial development happening next in Woodlawn?

BE: We have one building going up at 63rd and Cottage, and we’re working on another project at the intersection. I think CTA wants to reposition the terminus of the Green Line, and if we can get some really good investment on a couple of corners there, you’ll see some nice commercial development in that area. And then the hope is that it begins to radiate both east and west, out from the intersection. But you have to build out from nodes of activity.

61st Street is also promising. I don’t know where the commercial would go there, but I read that when the new dormitory is completed there will be more undergraduates living in Woodlawn than in Hyde Park, which is pretty significant. That’s very appealing to potential commercial tenants.

CM: It sounds like your work in Woodlawn is tapering off, then, especially with the increasing interest in commercial development accompanying the incoming Obama Presidential Center?

BE: If you think about work on a continuum that started almost 10 years ago now, we’re more than halfway along that continuum. We have at least two more phases of housing in Woodlawn, one that will be started later this year.

BE: To give an example of a phase, there are two buildings we purchased that we’ll be rehabbing and preserving as affordable—so that’s a phase. It's a total of 160 units. That work should start probably the third quarter of this year. And then we’ve got some other housing that we need to complete to fulfill our obligations under the choice. Hopefully we can do next year or 2020. The commercial is really just a result of people’s willingness to look at Woodlawn in ways that maybe they weren’t 10 years ago.

CM: Is there anything you’d like to speak about that we haven’t asked you so far?

BE: The South Side community is amazing. Thinking about it in terms of, like, its raw amenities, it has Jackson Park and Washington Park, great public transportation access both with the Green Line and the Metra, vehicular access, Lakeshore Drive and the Expressway. It has incredible potential and I think we’ve got a time now to where people are beginning to see that potential. We have hardly done this work ourselves. The city and the state have been with us all the way. Tenant organizations, the community organizers—it really has been a coalition of the many.

BE: We haven’t seen it and we wouldn't necessarily see it because, by and large, we don’t do a lot of market-rate rental. Most of our transactions are restricted by income maximums, rent maximums, or a little bit of both.

Our most recent study, where we tested the upper limits of the market, was with the building we just opened at 61st Street. Half of those units are, in fact, market-rate units. This was the first time we did anything that was that substantially market-rate. [According to the study,] 61st Street is the top of the market in Woodlawn, particularly east of Cottage Grove by the University. The comp study came back to us putting a $1,500-a-month two-bedroom at the top of the market.

This interview was lightly edited for clarity.