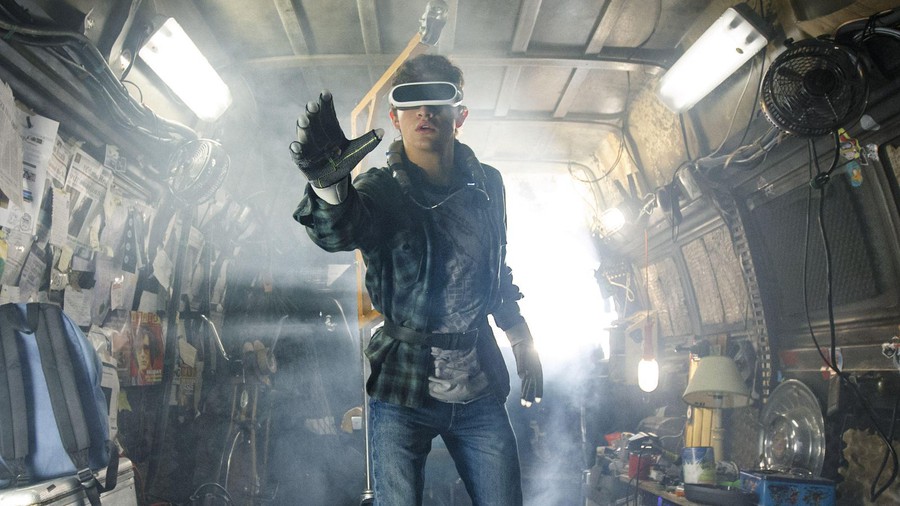 In an early scene from Steven Spielberg’s 1982 masterpiece E.T. the Extra-Terrestrial, the film’s young protagonist attempts to introduce the titular alien to Earth’s pop culture by improvising an epic battle using his collection of action figures. It’s an endearing moment that captures the nostalgia of being a kid and throwing together toys from your favorite movies into a big pile with little regard for which character comes from which movie. It seems that Spielberg, now 71, held on to that feeling; his newest blockbuster, Ready Player One, adapted from Ernest Cline’s book of the same name, is a fun and nostalgic mess of a movie designed to recall the emotions of E.T.—the kind found while “playing pretend” with action figures.

Set in a near future in which overpopulation and corporations have all but ruined the world, characters in Ready Player One retreat to an online utopia called the OASIS where they can be whoever they wish—often characters from ’80s and ’90s pop culture. The story takes off when James Halliday, the eccentric founder of the OASIS (Mark Rylance) dies. It is revealed that he left clues to an Easter egg somewhere in the enormous virtual world, which will bestow his enormous fortune and control of the OASIS to whomever finds it. Teenager Wade Watts (Tye Sheridan), alongside a crew of decidedly more interesting side characters, sets out to decipher clues related to the founder’s life and his extreme love for ’80s video games and movies. In competition with the good guys is an evil corporation led by the devilish CEO Nolan Sorrento (Ben Mendelsohn), who uses a large virtual army to pursue the egg, scheming to monetize the OASIS with advertisements.

If this sounds predictable, that’s because it is; the movie leans heavily on the established trope of teenagers versus “the man,” the ever-present antagonist of ’80s movies. The film tries to be topical with its thinly veiled net-neutrality metaphor, pertinent to today’s political discourse, but fails to explore these themes with serious depth. The 140-minute long film also drags noticeably when the characters are forced to spend time in the “real” world beyond the OASIS. While the storyline cannot avoid some departures from virtual reality, these moments felt boring and forced.

The film also stumbles into another trope: a soul-crushingly bland protagonist. The character is a stand-in for the audience, with an indistinct personality in an effort to be relatable. However, someone whose defining personality trait is that he knows trivia about a virtual reality founder is simply not interesting. Despite Tye Sheridan’s commendable performance, the boring script and weak character development cannot be saved. With the exception of Watts’s love interest “Art3mis” (Olivia Cooke), most of the other characters are not as dull; his quirky best friend Aech (Lena Waithe) and an online bounty hunter played by T.J. Miller are comedic standouts. The big bad Sorrento is also portrayed surprisingly well, delivering menacing moments interspersed with the witty-yet-evil fare expected from campy Hollywood villains. Halliday and his partner (Simon Pegg), captured mostly in flashbacks, also provided fascinating screen time.

Spielberg and his writers do know the movie’s strengths, however, and never let the audience linger for too long in the “real” world. Much of the movie takes place in the rich and imaginative world of the OASIS, rendered in sometimes mind-blowing CGI that impresses with awe-inspiring vistas, and exciting action scenes well complemented by Spielberg’s meticulous style and smart use of long tracking shots. A race sequence in the beginning of the film involving a certain famous DeLorean is one of the more impressive action sequences I’ve seen in a while. The final act, which is most reminiscent of those childhood play-battles we see in E.T., is well directed and incredibly exciting; let’s just say that seeing the Iron Giant fighting alongside a collection of other greatest-hits robots is a terrific experience.

With a predictable plot, the thrill and excitement of the film came simply from seeing things that I love come together in a well-made blockbuster. If my E.T. reference made you roll your eyes, this is definitely not the movie for you. For me, however, the surprise of catching both the well-known and obscure references Spielberg and his team were able to portray on screen was often excitement enough for me. I’m not kidding when I say the film feels like a kid’s imagination come true on the big screen—or, at least, a HUGE nerd’s imagination come to life.