Cardi B Conquers New Territory with "Invasion of Privacy"

Cardi B's debut studio album, "Invasion of Privacy," hits on the inspiring confidence that she's known for, with a taste of something new. 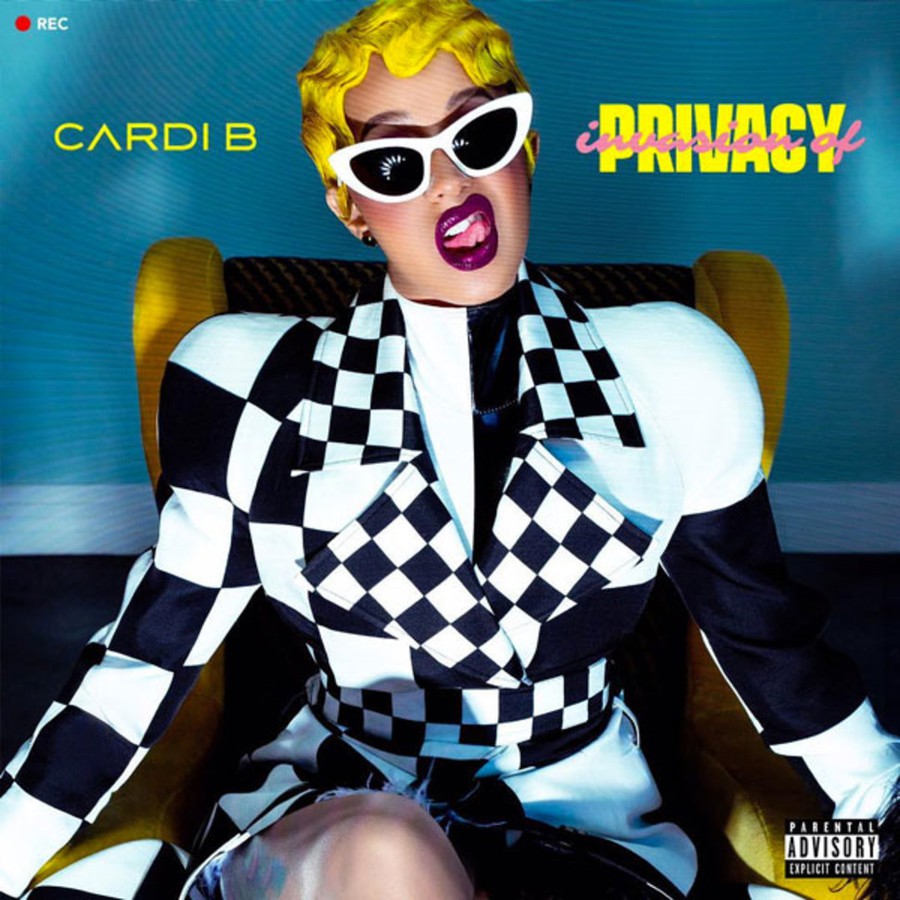 In 2015, “a hoe never gets cold” was one of many memes to become famous not only because it was eccentric and hilarious, but also because it featured women expressing self-love in a way that was accessible to women across the world. In the video, a pre–“Cardi B” Cardi shows off her revealing outfit despite the cold weather. Although many viral stars have trouble pivoting from Internet celebrity to something more lasting, Cardi is an exception. This might be because Cardi has a lot going for her that the others just don’t. After becoming famous for discussing her life as a stripper on social media, Cardi became a regular on the VH1 show, Love & Hip Hop: New York, in which her unabashed, unfiltered persona gained a platform. Now, a year since she signed with Atlantic Records and her single “Bodak Yellow” blew up, her highly anticipated first album under the label has finally dropped. Invasion of Privacy is a fitting title for an album that proceeds such a rapid rise to fame.

Invasion of Privacy had an overwhelmingly positive reception—Chance the Rapper was one of dozens of celebs who took to Instagram to sing its praise, congratulating Cardi on “releasing a classic album as her debut.” Ask friends what they think of the album, however, and the reviews are likely to be more varied. This is to be expected. Work so blatantly feminist is often written off as “mainstream,” its substance ignored.

The album is a mixed bag, stylistically. There are the classic Cardi songs such as “Get Up 10” and “Bickenhead,” but then there are ones that show her softer side like “Be Careful,” “Thru Your Phone,” and the final track, “I Do” (feat. SZA). The latter, though less aggressive, are still peppered with typical hints at her contagious confidence.

Although songs like “I Like It” and “Drip” stand out upon a cursory listen, it’s Cardi’s ability to serve us more of whatever made “Bodak Yellow” so delicious that really secures the album’s likeability. In “Money Bag,” for example, she displays typical bravado with lines like “I do the Maybach on Monday, Ferrari Friday,” and “Wig be laid, waist snatched.” A lot of what’s appealing about Cardi is the confidence she inspires, much like female rap artists Lil’ Kim, Missy Elliott, and Nicki Minaj. While switching between a Maybach and a Ferrari is not exactly relatable for the average listener, lyrics like “and my bitches with me pretty too, they look like bridesmaids” still make you want to be her.

Cardi’s clout has risen significantly in this past year, if the star power of her collaborations is any indicator. Among the features are “Drip” (feat. Migos), “I Like It” (feat. Bad Bunny and J Balvin), and “Ring” (feat. Kehlani).

While Invasion of Privacy features enough typical Cardi songs to establish her style, some of her collaborations explore some variations from the norm. “Best Life” (feat. Chance the Rapper) is interesting because Chance’s style doesn’t seem like it would mesh with Cardi’s, and yet the song works. The two find common ground talking about their recent success. Cardi’s line “I’m gigglin’, can’t let the devil have the last laugh” pulls in some of Chance’s religious imagery, while Chance defends Cardi—“Don’t be mad because she havin’ shit, you had it your whole life.” Other songs, like “Ring” (feat. Kehlani) touch on relationship issues, presenting a gentler Cardi. “Should I call first? I can’t decide / I want to, but a bitch got pride” is an uncharacteristically indecisive line, but its relatability is refreshing, and Kehlani’s voice on the chorus is as angelic as always.

A review of this album wouldn’t be complete without mentioning “I Like It.” Genius calls it the album’s “most danceable song.” Sampling “I Like It Like That” by Pete Rodriguez, another extremely danceable song, “I Like It” features Bad Bunny and J Balvin, respective Latin trap and reggaeton superstars. Cardi’s father is Dominican, and she has done other Spanish songs, namely a Latin trap remix of “Bodak Yellow” featuring Messiah and “La Modelo” in collaboration with Ozuna. Cardi’s Latin music adds dimension to her persona, but “I Like It” is broadly appealing. You don’t have to understand the Spanish verses to dance to the song.

It’s hard to explain why Cardi is so likable. Maybe it’s her realness—one never gets the sense that she’s pretending to be anyone else, and she never apologizes for that, either. Maybe it’s her confidence, which feels so accessible and natural somehow. Maybe it’s the fact that her songs are just good (something that’s debated by those who are put off by her feminism). Maybe we all just love an underdog success story, which is certainly a part of her narrative as a former stripper. Whatever the case, Invasion of Privacy solidifies her status as an artist, rather than a meme.