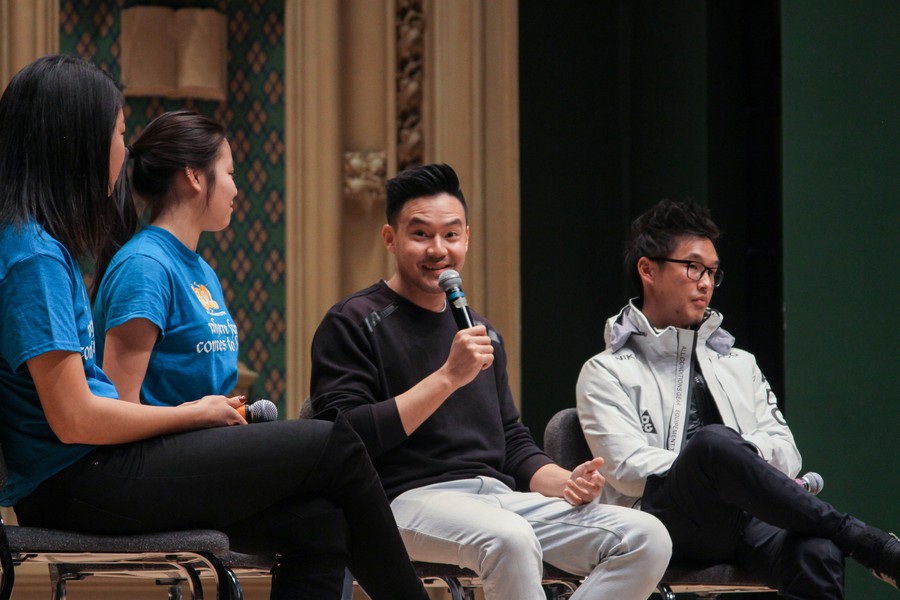 For a fleeting moment, Wong Fu member Philip Wang walked on stage, then was ushered to return backstage. It wasn’t his moment yet. The crowd and the Wong Fu crew waited patiently for the sponsor to finish her speech. But all that didn’t matter as the crowd was sent into a craze of applause and whistling as he finally made his belated entrance—it was better late than never.

As much as the Wong Fu crew are now icons of the Asian-American community, with over three million subscribers on YouTube and over 500 million total views as of April 2018, waiting for the right opportunity was a significant chapter of their narrative trajectory to stardom. As Wong Fu member Wesley Chan explained to an enthusiastic audience in Mandel Hall last Tuesday, “When we started, first of all, YouTube didn't exist yet.” The audience collectively gasped. He then added, “Social media didn’t exist,” and the audience chuckled in disbelief.

Indeed, without media platforms like YouTube that allowed content creators to directly reach their audience, the means were few for an Asian American to prove himself in the entertainment industry. The issue wasn’t so much about being denied a particular career option as it was about the need for representation. Wang said, “Growing up I would stop a music video just to see [an Asian] backup dancer and be like, ‘That’s me! I see myself!’.... [That’s why] the issue of representation is so important and powerful.”

But, like most YouTube celebrities, the members of Wong Fu Productions did not always intend or realize that they could represent the voice of the Asian-American community. "When we started, it was just fun," said Chan. "We were students just like you guys were. Philip, Ted, myself, we made videos in class, and found it fun, and realized how we wanted to keep doing it outside of class…. Then some of them were getting views, some of them a lot of views, and it just got viral.”

In fact, Wang told the audience, “When people [first] started telling us, ‘You guys are awesome…. You are representing us,’ originally, we were like, ‘No, that’s not us, we don't want that responsibility.’” But as their popularity grew, it was inevitable that, given the scanty headcount of Asian-American celebrities, they had to eventually shoulder that responsibility.

Yet, even Wang conceded that more than a singular voice is needed to truly represent a diverse Asian-American community. He said, “At the end of the day, we can only do what’s authentic to us, and what we feel is personal to us. But we also know that there are a lot of voices that need to be heard, and what we’re trying to do is to find other creators that we can work with to help us to tell different stories and different perspectives.”

While the media industry has arguably been hostile to the entrance of Asian Americans, Asian Americans in the past have been relatively resistant to the idea of pursuing a creative career. Scattered throughout the session were stories from Wang and Chan about stability being a deep-rooted cultural ideal that could potentially turn individuals away from a risky creative profession. Wang said that he acknowledges the risks of a creative career and supports those who seek stability. He emphasized the need for an ecosystem to support a rise in Asian-American representation.

“We don’t go around preaching art and creativity is the only way to be satisfied in life, and you got to quit your job. I’m definitely not one of those people…. For our community to progress, we need people in all different positions.” His theory is that every Asian American has a part to play in this ascension, by either providing capital, being a consumer, or being directly involved in a creative career. It is these components working in conjunction with each other that creates a positive cycle of reinforcement and allows for the increased representation of the Asian-American community. This process requires patience, however.

“Many of my friends are like, I wish Asians have a Black Panther, something that is that cool. But let’s remind ourselves that they’re like at Chapter 50 [while] we’re like on Chapter Two or Three." Though the Asian-American population is still waiting for more representation, Wong Fu’s crew members have shown that waiting is as much about patience as it is about seizing the moment when it finally arrives.