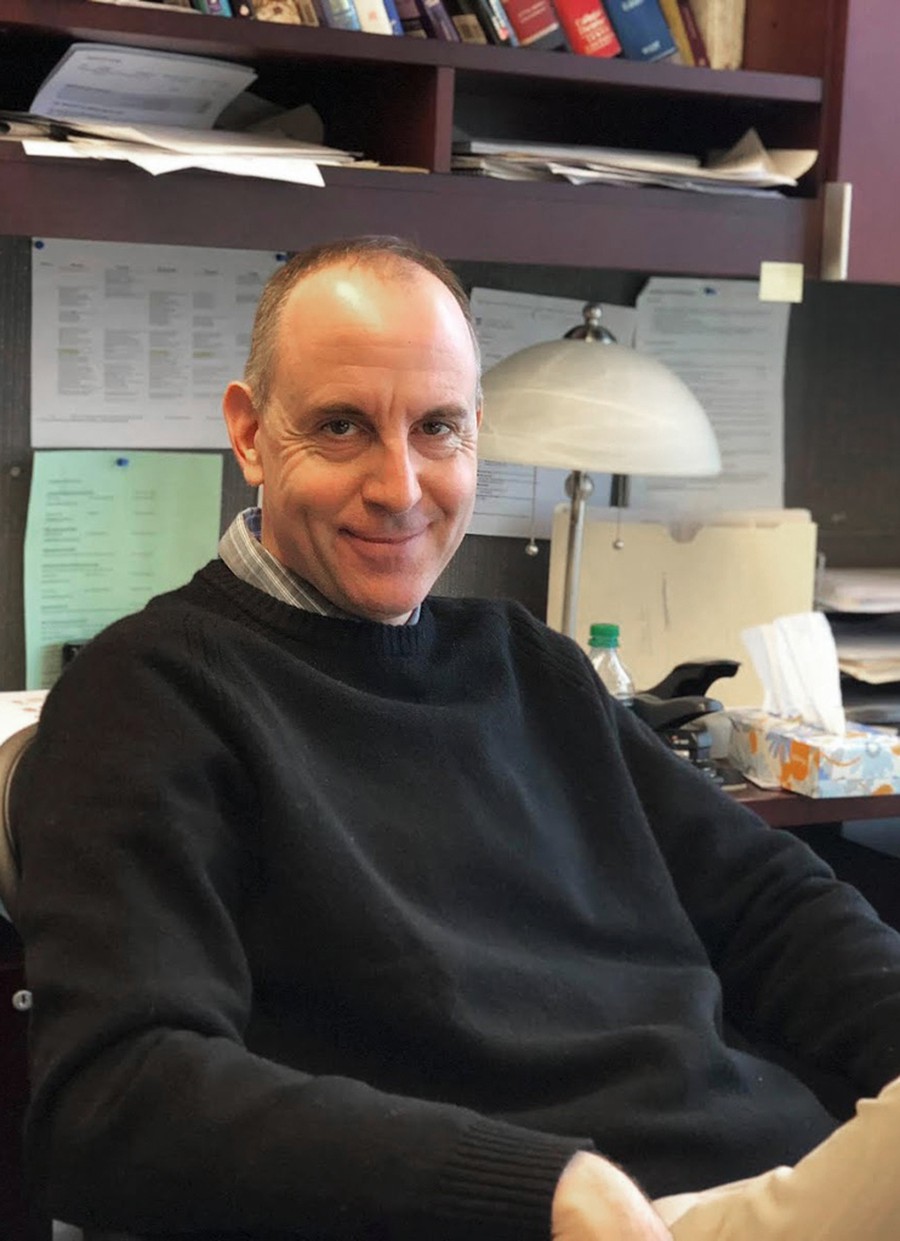 Eric Posner has been a professor at the Law School since 1998. An accomplished law scholar, he is known for proposing potentially controversial ideas, as he does in his upcoming book, Radical Markets.

Radical Markets is co-written by Glen Weyl, a research scholar at Yale, and will be released in early May. The Maroon sat down with Posner to discuss the  book and his past propositions that generated high levels of debate.

Chicago Maroon: Can you give a quick summary about what Radical Markets is about? How long have you been working on it?

Posner: The book is about how to design markets and market institutions, so as to advance both economic growth, or wealth generally, and equality. Often, people think that markets are inconsistent with equality. Their argument is that [markets] depend on how they're designed and they can be designed in ways to advance equality as well as wealth. And one of the premises of the book is that the market institutions we currently have were developed a long time ago, before the radical changes in technology that we've experienced over the last several decades. One of the reasons the country has experienced slow economic growth and worsening inequality in recent years is that the market institutions we have are out of date. The book goes through five topics where markets have done poorly and where they could be improved.

CM: What are the five topics?

Posner: One is property markets. The second is political markets, which is the market for political influence. We have a chapter on capital markets and a chapter on migration and labor markets. The final chapter is on data markets. The market for personal data that people basically gift to the big Silicon Valley tech firms...My co-author is Glen Weyl, an economist, who was here for a few years. He and I had been working on related ideas for quite a long time, maybe three or four years. The idea in this book was both to draw on the academic work but also try to make a more general argument for a general readership.

CM: Do you think the audience is more intended for very academic people or for anyone who might be interested in the topic?

Posner: It's for anyone. Although realistically it would be for the sort of person might read The Economist.

CM: I heard that the book has some controversial propositions. Do you have an idea why that is?

Posner: It's not out yet, so it's a little hard to talk about what will upset people. What's unusual about the book is that we’re pro-market, but we're not libertarians. We’re not the traditional Chicago school type of pro-market people. We think that markets are not natural, but they're institutional artifacts. They're designed by governments and they can be designed in better or worse ways. We put a lot of emphasis on the problem of inequality, so the book could conceivably anger people on the right and the left. A lot of people on the left reject markets and a lot of people on the right don't care about any equality in the way we do and tend to take, what seems to us, a very unrealistic view on what markets are and how they work.

CM: Where would you place yourself on the spectrum of political ideologies?

Posner: I think of myself as a more or less middle type of person. I think of things in a very technocratic way. My philosophical starting point is kind of utilitarianism, or what's sometimes called welfarism—which is the idea that people's wellbeing matters and should be advanced by the government. Depending on your empirical premises and how you think about how the world works, that can lead to sometimes more left-wing proposals and sometimes more right-wing proposals. It depends a lot on what area of life you're talking about.

CM: Have you received any backlash from your colleagues here?

Posner: No, I think they're pretty middle-of-the-road a lot of the time. I think there are two ways to react to a book like this. One group of people are people who care about ideas and are intellectually curious and interested in how things might be changed. They don't always agree with what we were saying, but they find it interesting and provocative. Then there are people, especially out in the world of social media and so forth, who have very rigid ideological views and they're going to attack anything that's inconsistent with them. The people on this faculty are just not like that.

CM: In a recent Politico article, you proposed a Visas Between Individuals program, which generated a lot of criticism. Some people even compared it to indentured servitude. What do you think about that comparison?

Posner: It’s not an indentured servitude because in indentured servitude, you're not allowed to quit. The way it worked in the 18th century and early 19th century was that, let's say you're in Britain and you want to come over to the US. You'd have to enter a contract for many years and then you're supported by the people who you borrow money from. You're not allowed to leave. You're subject to a lot of abuse, and there wasn't really much in the way of legal protections in those days. But under our system, it's just like the H1B visa right now. You can leave at any time if you're unhappy with the arrangement—you just turn around and go back to the country you came from. Unless there is fraud or other types of abuse, it shouldn't cause any harm to people. And if there is fraud, there would be a legal remedy of some sort.

CM: Can you see it realistically being put in place in our country within your future?

Posner: The interesting thing is that it already exists a little bit. There is a program for parents that the State Department runs, the Au Pair Program, which is not that different from the program we propose. It was intended as a cultural exchange program. A family in this country can invite a person from another country to come and take care of their kids. Since it was designed under this visa for cultural exchange, it wasn't thought of as employment, although it is. The person comes over, takes care of your kids, and then in return, gets some cultural value. But you do pay them a small amount of money, and you give them housing and food.

People think this is good. Some people don't like it, but it's very similar because, effectively, what's happening is that a family is hiring a foreign worker to come and babysit. If that exists, I think our program could exist. We would want it to be subject to tighter controls and for it to be clear that the person who's coming over is a worker who's being compensated for the work that they do. They would be protected by all the regulations that protect American workers in the United States. The problem is at the moment, immigration is incredibly controversial in this country. Really any proposal you make, no matter what from the left or the right is just going to make people very angry, which is part of the reason why Congress can't change the law and make things better or make things worse. It's just become such a hot button issue. When we first started writing the book, it wasn't quite as controversial an issue as it is now. I think if things calm down a little bit, maybe there could be serious consideration of this proposal.

CM: Are there are other countries that have similar programs to what you proposed?

Posner: Not that I know of.

CM: Why is it that you end up having so many controversial ideas? Is it something about your particular legal philosophy that lead to there or have you always just had radical ideas?

Posner: Glen and I share a similar characteristic that I think a lot of academics have, where we like to take arguments to their logical conclusion. Politicians are different. Even the most conscientious, or maybe especially the most conscientious politicians, they're interested in understanding in incrementally improving things within the bounds of what's politically realistic. By contrast, we have these sort of basic understanding of how institutions work and how things in general work. And then you just, you want to push on it and see if you can make things any better. We do this a little bit in the book, but generally speaking, most of the institutions and practices that we value these days were at one time incredibly controversial and regarded as radical, crazy, or unthinkable. We talk about this, we talk about people who are often associated with conservative views like Adam Smith, who was at the time a radical. He was deeply concerned about the entrenched privilege of the aristocracy that existed in England in the 18th century, and he saw markets as a way of breaking that up, taking away some of their wealth and power. But, you know, over time all that changes. And we also talked about a lot of 19th century thinkers, progressives like Henry George, who was a famous journalist, and 20th century thinkers as well. Often, when they first make their arguments, they're thought of as crazy, but in hindsight, we can see that their arguments are very logical and reasonable. In a way it's surprising that people were so angry about them. I think this is just something that academics can do to some extent because they have job security and they're not politicians who can be voted out of office. I do like to provoke a little bit because I think a lot of what people believe is because their parents believe it.

Note: This article has been lightly edited for clarity.

An earlier version of this article misstated the year that Posner joined the Law School.