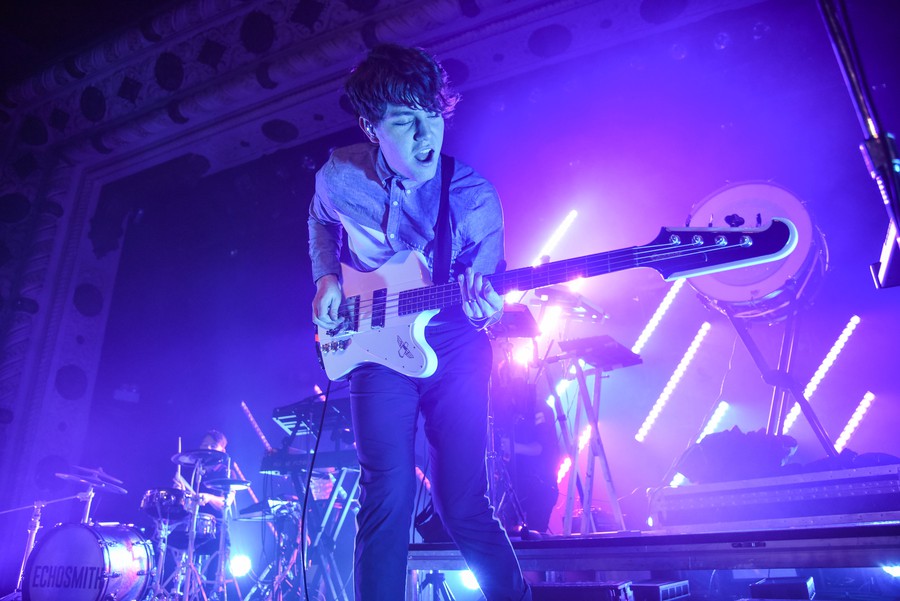 In anticipation of their upcoming EP Inside a Dream, indie-pop band Echosmith brought their eclectic mix of energetic pop and sweet-sounding ballads to Metro Chicago this past Saturday, proving that the band of “Cool Kids” is ready to grow into something so much more.

Leading their second headlining tour, the three Los Angeles–native siblings have come a long way since their early beginnings posting covers of popular songs on YouTube. Since the success of their debut album Talking Dreams in 2013, the band has been busy performing nationwide on late night talk shows like The Tonight Show and Conan, and collaborating with artists such as Zedd and the the Goo Goo Dolls. Having cleared the jump from YouTube to prime time, and now a trio since one of their members, Jamie, stepped aside to take care of his newborn baby, the Sierota siblings are back on the road again.

Upon taking the stage at Metro Chicago, Echosmith launched into an array of infectious dance anthems. Bursting with bouncing neon lights, confetti cannons, and a light-up tambourine, the entire set seemed like a fever dream full of color and dance. The bright, pulsating colors matched the youthful energy of their pop hits “Let’s Love” and “Come Together.” I first saw them a few years ago in L.A., and their stage presence is still as vibrant as ever. The only difference was that this time there was a bigger crowd to dance and sing along with, a marker of the band’s increasing popularity throughout the years.

After a series of dance numbers, the band then segued into a set of slower, yet still upbeat songs. During “Tell Her You Love Her,” lead singer Sydney threw roses into the crowd, and the band’s platinum-certified hit “Bright” stood out for eliciting a large chorus from the audience. Unlike some other artists who have risen from YouTube, Echosmith have retained their authenticity and loyalty to their fans. At one point during “Bright,” Sydney took out her phone to record the crowd of fans singing along. The video wasn’t for Snapchat, it was just for her. This slower, sentimental portion of the set ended with an acoustic performance of “Dear World” which, with a single white stream of light pouring over Sydney, was simply angelic.

Returning to the high energy vibes that opened their set, Echosmith premiered the new synth-driven sound featured on their latest EP, Inside A Dream. Most notable is their lead single “Over My Head,” whose drum beats and punchy chorus are irresistibly catchy. In contrast to their earlier happy-go-lucky music from Talking Dreams, this new EP leans heavily on synthesizers and electronic instrumentation: the modern, edgy direction toward which Echosmith seems to be heading. Abandoning the naïve love songs prominent throughout the band’s early work, Sydney now sings “Goodbye” to her former toxic lovers. In comparison to the start of their set, the band was no longer bouncy and bubbly, but rather electrifying.

Echosmith finished their set by returning to hits off their debut album, most notably “Cool Kids,” as well as a cover of “When You Were Young” by The Killers. While these songs served as crowd pleasers, I couldn’t help but crave more of their new music; after the concert, “Over My Head” remained stuck in my head more than anything from Talking Dreams did.  Nevertheless, with the anticipated release of their upcoming album, it is clear that the band is ready to become their future selves, today. The “Cool Kids” are no longer kids anymore.

More photos of the concern have been uploaded to a photo essay, available here.