Court Theatre Delivers Commentary With a Side of Comedy 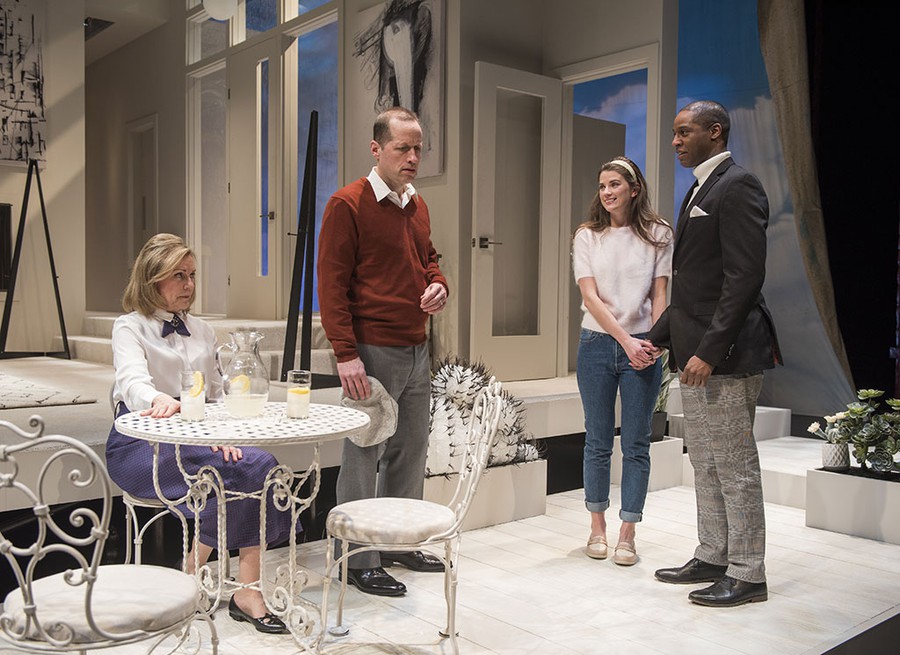 A scene from Court Theatre's "Guess Who's Coming to Dinner"

The Court Theatre’s Guess Who’s Coming to Dinner opens with an empty, upper-class living room furnished with minimalist furniture. Home to the Draytons, a liberal white family living in 1960s San Francisco, the setting is initially calm. In moments, however, everything will change when Joanna Drayton (Bryce Gangel) brings her fiancé John (Michael Aaron Pogue), an African American doctor, to dinner. Adapted by director Todd Kreidler from the groundbreaking 1967 film of the same name, Guess Who’s Coming to Dinner portrays a family choosing to uphold their liberal principles despite widespread racism.

The drama is structured around a series of conversations that take place in the living room, with each character taking on a different perspective of the “situation,” “issue,” “problem”—all words used to describe the prospective interracial marriage between John and Joanna as tension escalates throughout the play. Although Joanna’s father, Matt (Tim Hopper), is the ostentatious head of a liberal newspaper, he reacts most strongly against the prospect of a black man in his family, while his wife Christina (Mary Beth Fisher) soon regrets her initial hesitations and becomes determined to take her daughter’s side.

Both parents struggle to uphold their liberal principles in the face of obvious discomfort. Their discomfort is initially expressed as a reluctance to expose their daughter to the social judgement that comes with marrying a black man, but in fact Matt seems uncomfortable with very idea of familial ties with a black man, later ludicrously noting the violence that John’s family could inflict upon his daughter. The conflict eventually evolves into a conversation between the Draytons and their friends, triggering heated arguments. One of Christina’s colleagues attempts to plot a break-up between the couple, while Monsignor Ryan (Dan Waller), Matt’s friend, is fully supportive of the interracial marriage and accuses Matt of being unable to live up to his purported principles. Through these conflicts the audience observes each character revealing, intentionally or otherwise, opinions that often differ from their superficial ideals.

Despite these tensions, however, the play does not lack humor. The awkward intrusions of guests and the confusions they encounter are all met with laughter from the audience. The comical scorn of the family’s black maid toward John, and the gallery holder’s elaborate plan to make the "chocolate lose its flavor" (as if John were a novel flavor to be tasted), proves humorous in its absurdity. Yet, while entertaining, the play makes it impossible to deny that such aggressions still remain relevant today.

However, changes in the characters’ attitudes are at times given little explanation, seeming only to serve as plot devices. For example, Joanna’s father reconciles his beliefs and accepts the marriage at the end of the play despite no change in his opinion on the harms of interracial marriage. He becomes supportive due to familial pressure, a change that is necessary for the play’s unrealistically optimistic ending, but one which yields no insight into a more stable, or applicable, solution. The play thus outlines problems without portraying a sincere reconciliation.

The entertaining aspects of the production definitely make it worthwhile, but it is dubious whether the conversations and arguments raised by the play leave any real impact. Guess Who’s Coming to Dinner certainly deserved its standing ovation; yet the societal pressures Joanna and John’s marriage will face, and the concerns voiced by opponents of the marriage throughout the play, dissipate without sufficient reasoning to strengthen the play’s premise.