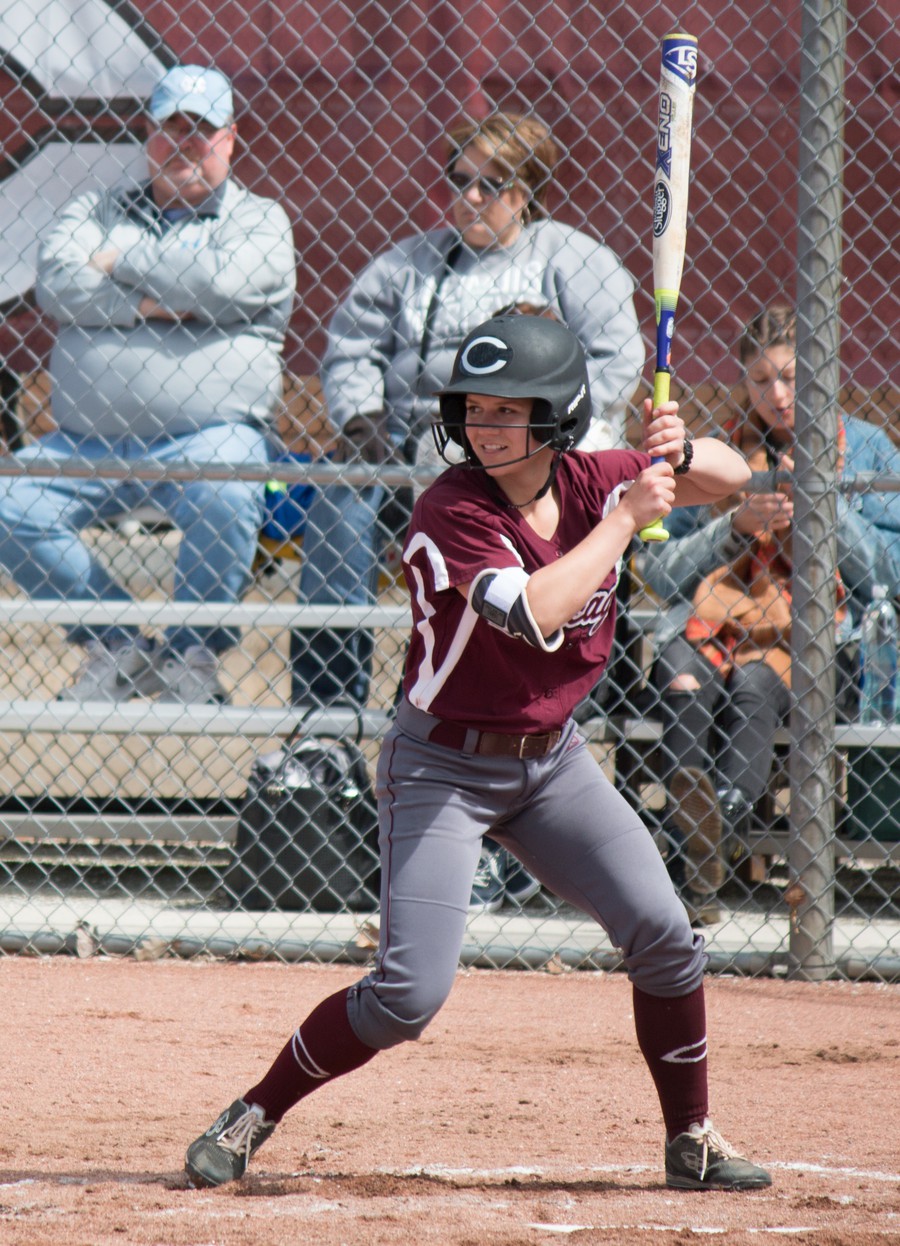 Second-year Christie Ambrose stares the pitcher down as she prepares to hit the ball.

The University of Chicago women’s softball team made the trip down to St. Louis this weekend to play a host of games against rival Wash U. The Maroons went 1–1 on Friday, and the Saturday double header was canceled due to inclement weather. The games brought the South Siders to 9–7 overall and 2–2 on the road.

The Maroons handily won the first contest on Friday by a final of 10–5. While the scoreboard after seven innings firmly held the Maroons on top, the Bears in truth held the lead 3–0 after three innings. However, Chicago was able to take the lead 9–3 in the sixth with the help of Wash U errors (six in the game) and firepower at the plate. Third-year Carly Schulz led the Maroons with three RBIs. Second-year Holli Jones and first-year Skye Collins, who both had two RBIs, and second-year Serena Moss and first-year Abby Hayes, who both had one RBI, also helped lead the way offensively. Fourth-year pitcher Molly Moran went the distance in the circle, giving up seven hits in seven innings while also recording six strikeouts and two walks to bring her record to 4–3.

Second-year Emma Nelson, who finished the weekend with three hits and three runs scored, spoke of the season so far and the first win: “We started out the season with some strong competition and competed well in Florida. Our record isn’t representative of how we battled against some top-ranked teams. We’ve shown resilience, coming back in games that the other team has gotten out to an early lead. Our pitchers and defense have done a solid job keeping us in games, and we have some pop at the plate. This weekend at Wash U showed a lot of what Florida had—we came out battled through being behind and our bats came alive to take the first game.”

The second game, however, did not fare as well, as the Maroons dropped the contest 9–0 in five innings. Nelson and Schulz were the only two Chicago batters to record hits, both singles. Wash U was able to score its nine runs off of 10 hits.

Nelson spoke of the second contest, adding, “The second game we unfortunately didn’t get the chance to rally as their bats were hot. As a team, we have a lot of talent and it shows at different points throughout each game. We are just missing a little something to bring it all together—once we figure it out, we will be a force to be reckoned with. We have our home opener today and are looking forward to this home stretch to bring in some wins.”

The Maroons hit the diamond again this Thursday with a double header against Aurora.