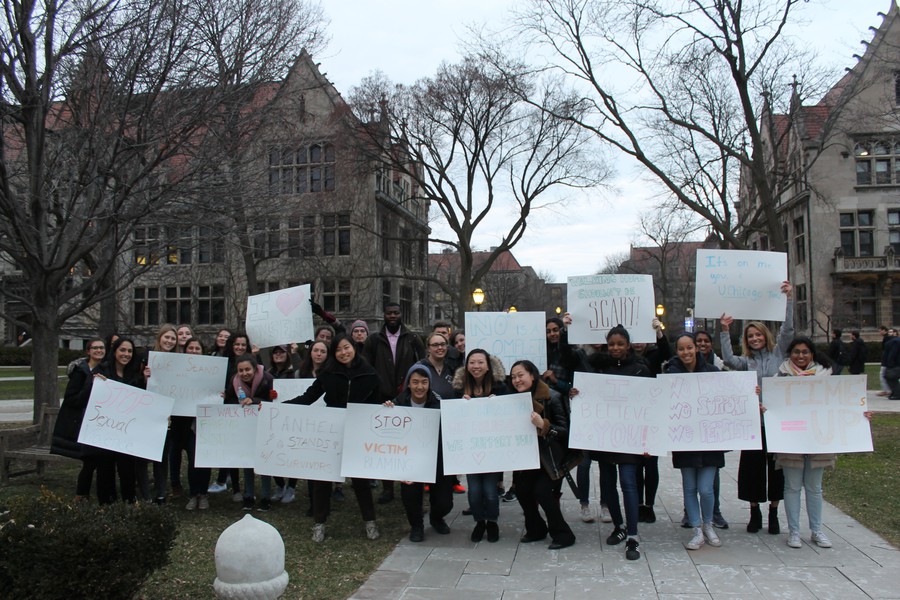 Take Back the Night drew a crowd that filled the McCormick Tribune Lounge. The audience, which was predominantly female, listened to speeches and songs by committee members, musical performers, and survivors of sexual assault and rape.

One speaker, third-year Anna Li, said while visibly holding back tears: “My story begins like many others. I was a freshman…I thought I knew a lot about consent and rape culture. I certainly never thought that rape was something that could happen to me too. He was my friend.”

Li went on to recount her story of sexual assault and the subsequent Title IX investigation she underwent two years ago at Northwestern University.

She transferred to UChicago after her appeal of a “not guilty” verdict was denied. When she left the stage, she received resounding applause.

Maria Mihailescu, a graduate student at the Pritzker School of Medicine and the chairperson of the SAAP, also spoke.

She encouraged students to raise awareness by posting on social media and speaking out, citing the impact small actions can have.

“A very small, trivial thing can cause a huge impact,” Mihailescu said. “If you get anything out of tonight [it should be] that your voice, and you just being here, matters, and you might not even realize it.”

The event also featured routines by the student arts groups Maya and the Underground Collective, including dances, songs, and spoken word poetry.

After the performances and speeches ended, the students made signs and marched to the quad, where the Women’s Ensemble sang “What Happens When a Woman,” a song about female empowerment.

“Sexual violence is not inevitable,” Mihailescu said toward the end of the event. “It’s not a mistake, it’s not an accident. It’s something that’s 100 percent preventable…let’s all come together to face the injustices we see every day.”

A full schedule of the SAAP’s events for this month can be found on their Facebook page.