The editorial board endorses Unite for Executive Slate, but we think some of their proposals would benefit from revision. 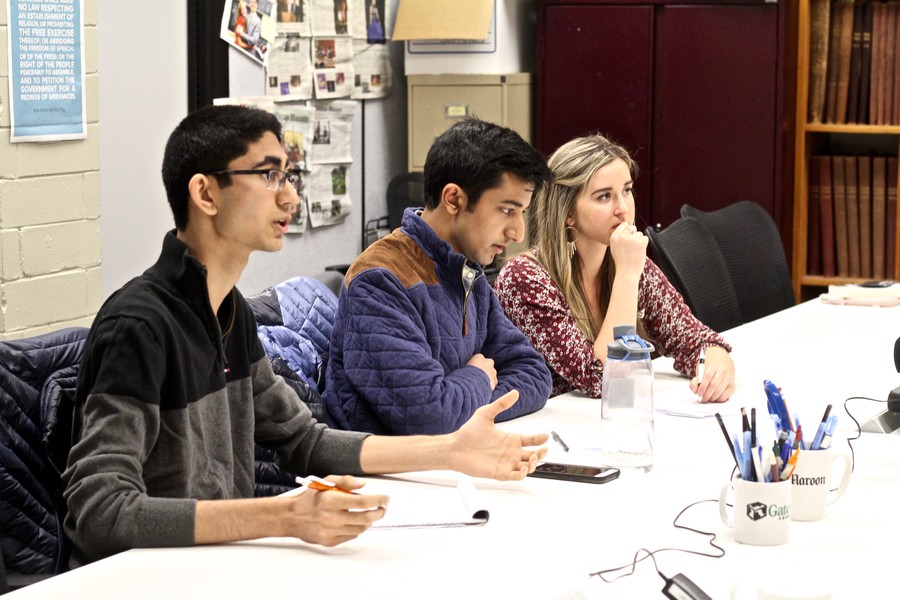 You can listen to the Editorial Board's meeting with the Unite Slate on the Maroon Weekly podcast:

The Maroon Editorial Board endorses Unite for Executive Slate in this week’s Student Government election.

Unite’s views are largely in line with those of the Maroon Editorial Board’s previous stances: They support increased mental health access and reforms to Student Counseling Services, increased Greek life involvement in handling issues of sexual assault, and releasing the use of force policy by UCPD. That being said, the Board has reservations about some of the details of the Unite slate’s platform and their plans to execute them. Many of their proposals lack specificity, and others include misplaced priorities.

The Unite slate has presented a serious platform addressing key campus issues, and its members have a range of experiences that make them well-qualified to lead the student body. The slate consists of Sat Gupta for student-body president, Malay Trivedi for Vice President of Student Affairs, and Natalie Jusko for Vice President of Administration. Two of Unite’s members—Gupta, second-year College Council chair, and Trivedi, a first-year College Council representative—bring valuable Student Government (SG) experience to the table, and second-year Jusko adds to the slate with her wide-ranging campus involvement in organizations ranging from Panhellenic council to Peer Health Exchange.

However, after meeting with Unite members to discuss their platform, we were left unsatisfied in several key areas.

Unite’s strong stance on addressing sexual assault on campus is admirable and its plan to place Greek life at the center of this conversation is smart. However, its proposals for how to bring fraternities into the conversation surrounding sexual assault are inadequate. Gupta said he is opposed to formal University recognition of fraternities because that would make the University more responsible when chapters misbehave. This may be true, but we believe that the University must take some responsibility in policing fraternities because we’ve seen that they are reluctant to do so on their own. While it’s unlikely that the administration will change its position on recognition, the Board believes this may be the only way to add real accountability to the Greek system. Unite said it supports strengthening or expanding Fraternities Committed to Safety (FCS), the initiative by fraternities to standardize sexual assault policies. We hope that if elected, Unite will develop a more concrete and cohesive plan for addressing fraternity issues, and we hope they will be leaders in bringing fraternities together to expand FCS into a fraternity council that can respond to policy violations on issues beyond sexual assault.

Unite also writes in its platform that it hopes to increase transparency of University administration decisions by facilitating significant dialogue between the student body and the administration. It aims to do so primarily through more town halls with administrators, similar to the one held earlier this month with University president Robert Zimmer. But when asked how they intended to increase attendance at such meetings, Unite members offered few suggestions beyond holding meetings on more specific topics. And they did not appear to have a concrete plan for convincing administrators to agree to more meetings with the student body. It seems like an empty proposal, and Unite is unlikely to find success in this area where past slates have failed unless they are ready to present some new ideas.

The Editorial Board was also confused by Unite’s inclusion of Major Activities Board (MAB) funding in its platform. Unite members stated explicitly to The Maroon that activities such as Summer Breeze are less of a priority than, for example, the Student Government Emergency Fund described in the section right above increased MAB funding in their platform. When asked about whether they believe it is more important for MAB to receive funding than initiatives such as the Emergency Fund for undocumented and marginalized students, Unite clarified that any increases to MAB would not come out of the Student Government budget which currently funds MAB, but rather from the University’s budget. We encourage Unite to focus their energies on using SG’s own budget to fund important initiatives like the Emergency Fund and to the extent that they are able to convince administrators to fund initiatives, we encourage them to prioritize serious matters.

Unite is running unopposed, with the exception of the satirical slate of Delta Upsilon fraternity brothers. In 2016, the Editorial Board declined to engage with the Moose Party because they refused to discuss sexual assault or any other serious issues. This year, a Moose member simply said “Yeah, we’re good,” when given a chance to address sexual assault at the SG debate, so our position on Moose stays the same. Unite is thus the obvious choice to lead the student body, and we strongly encourage students to participate in the election by casting votes for Gupta, Trivedi, and Jusko, despite our stated reservations.