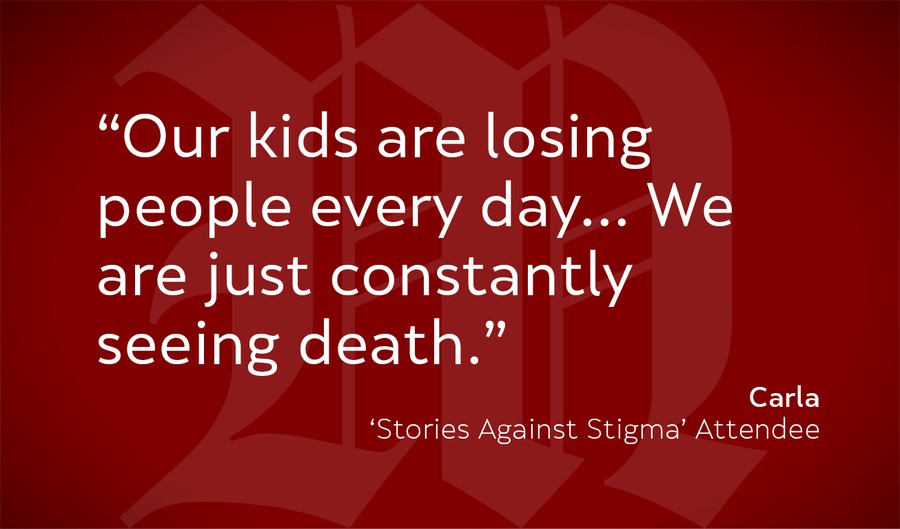 The Chicago branch of Black Lives Matter and local activist group Southside Together Organizing for Power (STOP) cohosted an event on Friday titled “Stories Against Stigma.” The event aimed to highlight the consequences of mental health clinic closures in Illinois. In 2012, Mayor Rahm Emanuel made the controversial decision to close six of Chicago’s 12 mental health clinics, including one in Woodlawn.

Emcee Gonza Kaijage moderated the event, held at the Sanctuary Café in University Church. Audience members stood up throughout the event to speak about their experiences. A variety of mental illnesses, from trauma to bipolar disorder to attention deficit hyperactivity disorder, were represented in their stories.

The discussion also touched on gang violence and police shootings, most notably the recent deaths of Decynthia Clements and Michele Robey, both of whom were fatally shot by police while experiencing mental health crises. Clements was shot on March 12 by Elgin police who believed her to be suicidal; Robey was shot by Chicago Police Department officers in February 2017 at a CVS Pharmacy while threatening employees with a knife during a manic episode.

“I would be remiss if I didn’t also mention the young man shot by UCPD,” said one woman in reference to fourth-year Charles Thomas, who was shot on Tuesday after what family and friends later described as a possible mental health episode. She added that STOP and Black Lives Matter are planning marches and press conferences to help “change the ways in which state and government respond to mental health crises.”

One audience member spoke about her mother’s reaction to seeking professional help. She recalled her mother saying, “You can do it, but don’t say nothing.” The emcee added to the commonly shared societal perception of mental illness as a taboo topic by stating that she was from Tanzania, “where mental health doesn’t exist…along with several other things.”

The often inescapable nature of mental illness, particularly when appropriate help is unavailable, formed a common thread for several stories. One woman discussed how panic attacks and agoraphobia led her “to flunk out of college,” while another man described how he was fired from his job planning parties for the elderly after a manic episode in which he went on a spending spree, followed by a long period of depression due to his bipolar disorder.

Another woman also emphasized the inhibitive effects of mental illness on professional aspirations, saying that her first thought after being diagnosed with bipolar disorder was her career. But she also began to think of those without private healthcare, to whom adequate mental health resources are not readily available. “Too many people receive their first psychiatric screening in jail,” she said. In Cook County Jail, the largest single site jail in the United States, an estimated one in three inmates has a form of mental illness.

Some audience members used poetry, spoken word, and rap performances to relate their experiences. The first speaker read a poem about her sexual abuse as a child, titled “For Little Girls Who Considered Suicide When the Silence Was Not Enough.” Another woman, who identified herself as Carla, spoke and rapped about the gang and gun violence in her neighborhood, with emphatic chants of “PTSD.”

“This is the closest I can relate to what we’ve gone through,” she said. “Our kids are losing people every day…we are constantly just seeing death.”