Women are discouraged from pursuing math, but we can start reversing this through our words. 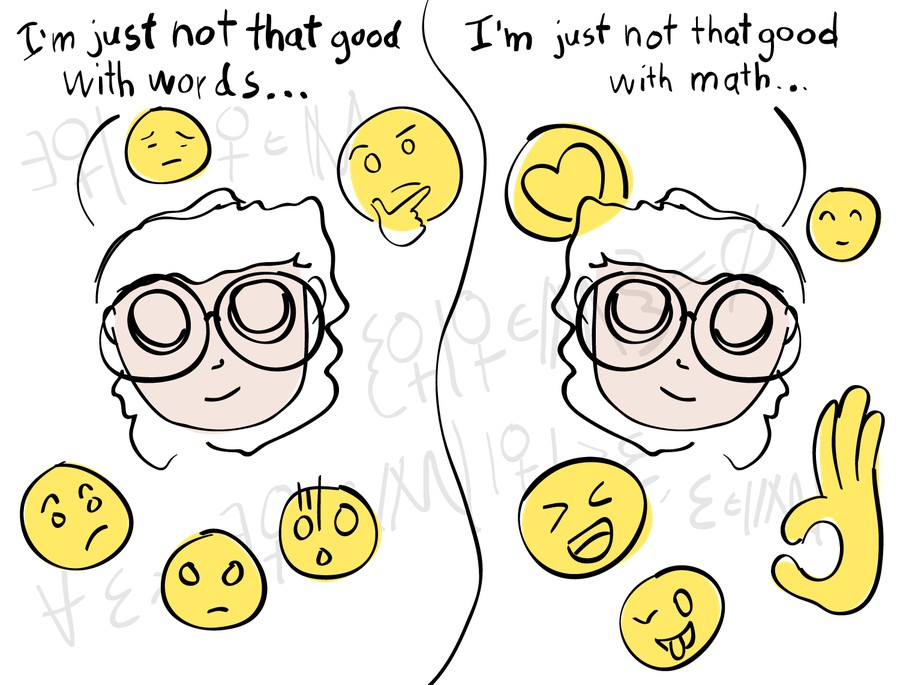 “I am not a math person.” I think many of us can relate to saying or hearing someone utter that single phrase. “I am not good at math,” “I’m bad with numbers,” “I just can’t do algebra”—the list of declarations of perceived mathematical incompetence goes on.

You’re either good at it, or you’re not, you’ve got it, or you don’t, people—especially women—often think. People see math as a kind of magical superpower, which only a select (male) few can possess. We see movies of geniuses, starring the Good Will Hunting type of men who just seem to “get it,” who have sudden sparks of seemingly divine mathematical inspiration, arising out of nowhere in their million-dollar brains.

From a very young age, people—particularly women—seem to form strong opinions about math. I’m not just talking about opinions like “I like it” or “I don’t” or “math is hard” or “it’s a breeze.” I’m talking about deeper kinds of judgements. The kind where a seven-year-old girl decides “I’m not a math person.” Before you’ve learned how to double-knot your shoelaces, you’ve learned somehow to make complex decisions about your mathematical skills, to decide that you are or aren’t cut out for math.

I find this mindset that society teaches girls to resort to from their first years of elementary school not only incredibly closed minded, but also plain ridiculous. People say “I’m not a math person” or “I just can’t do math” as if saying so magically precludes them from ever having to manipulate an equation in their life. Problematically, for reading and writing and a wealth of other subjects—except, for some reason, math—we are allowed to be strong but not perfect, improving, mediocre even; there is a space for those who don’t fall in the genius spectrum.

Girls wouldn’t say “I just can’t read” if they’ve had any kind of formal reading education. The majority of adults wouldn’t say “I just can’t change lanes” and not drive just because they are not perfect at driving a car. But somehow, even after years of K-12 math education, women will often say “I just can’t do math.” The phrase is thrown around casually, accepted, even, as a normal thing women and girls can and should say. It’s as if because we are not perfect at math, we have to categorize ourselves into the category of “not a math person,” forcing our potential to languish because mediocre or slightly above average just doesn’t seem to make the cut.

I see our culture’s condoned system of labeling ourselves “math people” or “not people” as incredibly counterproductive to the open mindset we should be trying to develop in young women. Sure, not everyone has to like math. Sure, not everyone has to be good at it even. But to see middle schoolers dismiss math and not even give it the time of day just because society has imposed this ridiculous, highly gendered standard of perfection on them is to rob them of the opportunity to work at something they might someday love. Childhood should be a time of experimentation, of trying new things, inside of the classroom and out, and unfortunately, “I’m not a math person” is just too easy of an out.

To be clear, it’s not some innate discrepancy in skill that’s causing girls to so-often gravitate to this culprit of a phrase. In fact, a UC Berkeley study indicates that we are no longer seeing the same differences in performance on state tests between girls and boys. On tests like the SAT, where evidence exists that male students are outperforming their female peers on the math section, the study suggests an alternative explanation: the test is taken by college-going seniors, and given that more women tend to go to college than men, the skew might be attributed in part to the fact that there are just more girls taking the test. As Janet Hyde, lead researcher explains, “you’re dipping farther down into the distribution of female talent, which brings down the average score. That might be the explanation…rather than girls aren’t as good as boys in math.”

The fact that gender priming—the act of reminding girls of their gender before taking a test—has an effect on both their performance and attitude after the exam is incredibly disturbing. The fact that simply reminding a student that she is a girl can lower her exam score is a testament to the unjust way in which our society treats being female as synonymous with being bad at math. What’s even worse is the fact that young, talented girls are internalizing these stereotypes; whether consciously or not, they have been forced to buy into a system that treats their capabilities as less than they really are.

It’s one thing if you are a woman who has really given math a fair shot and decided that you just don’t like it. But even then, why do we feel the need to say “I’m not a math person”? Why not just “I don’t like math,” or “I struggle with math”?

I don’t ask you to like math, I just ask you—especially if you are a woman—if you fall under the camp of someone who doesn’t enjoy it even if you’ve given it a fair shot, not to profess that you are not a math person. Why, you ask? Because you are an intelligent, capable human who isn’t pursuing math because you can’t do it. You aren’t pursuing math because you’ve chosen not to, presumably after you’ve given it a fair shot. Don’t feel the need to perform incompetence or unnecessarily downplay your skills. Because your words have the power to break and maintain stereotypes; your words have a role in either upholding or shattering that antiquated glass ceiling. And shatter I hope they will.

Meera Santhanam is a first-year in the College.