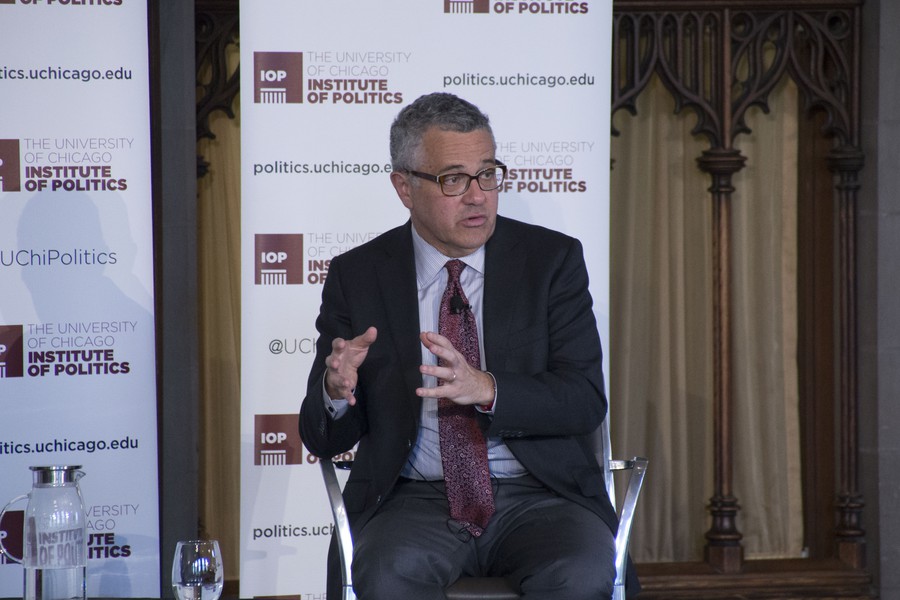 Courtesy of University of Chicago Institute of Politics

“The good news about working in cable news is that there’s no accountability for being wrong,” said New Yorker journalist and CNN legal commentator Jeffrey Toobin at an Institute of Politics event about the politics of the Supreme Court in the age of Donald Trump on Wednesday.

Law School professor David Strauss moderated the conversation, which centered on the increasing partisanship and polarization within the Court and how these currents would affect future appointments and case outcomes.

“To me, the big story on the Supreme Court is the same as the big story in our larger political life, which is the disappearance of moderate Republicans. They have disappeared from the planet Earth,” he said.

One of the reasons for the disappearance, according to Toobin, is gerrymandering. The Court is currently hearing a series of cases on political district drawing that could shift American political paradigms long-term.

Because the Republican base has shifted so far to the right and primary elections tend to run on base turnout, more extreme Republican candidates are getting nominated for elections against Democrats. This pushes all stripes of Republicans in a district to elect the more extreme member of their own party, and the party as a whole to the right.

“One of the reasons [moderate Republicans aren’t being elected] is that there are no districts they can win anymore,” he said.

However, Toobin said he has become more pessimistic about the outcome of the gerrymandering argument, particularly since momentum seems to have abated on a prominent case in Wisconsin which would have served as a mandate on the practice as a whole.

“Of course, the party in power reserves the most seats for itself. The act of drawing district lines has always been a political act,” Toobin said. “It still looks like the Court might strike this down in some way… but I’m not as optimistic as I once was.”

He noted that the Court justices are as likely to stick to partisan lines as the rest of American culture.  “I do think... the tribalism that is so familiar to us… is present on the Court. You rarely see the liberals break ranks on the high-profile cases,” he said.

“Those were good times for the liberals. Those days are over. You can see who’s winning now,” he said.

The main target for lawyers delivering oral arguments before the Court now, said Toobin, is Justice Anthony Kennedy, the only reliably unreliable justice left on the Court.

Moreover, justices rarely change their minds based on oral arguments. On hotly contested or culturally salient cases, they seem to hold their positions

“One question I’ve asked them is…how often is your mind changed? Twice a year, they said. And I’m sure they’re almost exclusively low-profile cases,” he said.

However, Toobin did not fault the Court’s partisanship. He said that it makes sense that a party in power would try to use that power to its maximum potential by appointing as many like-minded justices as they could in a term and ensuring that their votes would match the beliefs of the people appointing them.

“I don’t think you can address these questions in a nonpolitical way…. I tend to be sort of a fan of partisanship,” he said.

This being said, Toobin acknowledged that the levels of nominee-blocking, interfering in investigations, and political appointments and firings were at a toxic high point.

“We are in a ratcheting level of partisanship here. Trump…is going to give the base of the party to the courts,” Toobin said. “He outsourced Supreme Court appointments to the Federalist Society. [Gorsuch] is a hundred-percenter. That’s what every Trump appointee will be.”